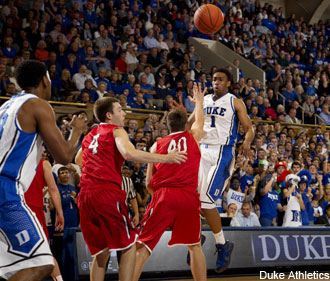 It’s a new era in Duke basketball. Jabari Parker’s commitment gave the Blue Devils their most heralded recruit since Kyrie Irving in 2010. Austin Rivers had all of the hype in 2011, but expectations were unrealistic. There are similarly high expectations for Parker, but after just one game in his collegiate career, he has surpassed them.

In his college debut against Davidson on Friday, the southside Chicago native dropped 22 points, 6 rebounds and 3 assists, but that run across the box score doesn’t even begin to do him justice. It wasn’t the numbers themselves, but how he got them that had the Cameron Crazies buzzing about their next potential one and done.

Coach K played Parker predominantly the power forward slot, allowing his quick big to exploit his defender. While he played on the perimeter primarily during his storied high school career at Simeon, the 6-8 forward showed his ability to go to work from the high post.

“I feel comfortable playing on the elbows because the help-side is on the other side of the floor and it gives me the whole baseline,” Parker said following Duke’s 111-77 win over Davidson. “Then if they try to come help, I know I have my whole team on the outside spotting up.”

As unselfish a player as you’ll find, Parker did a sick job of getting open teammates the rock once the defense collapsed. One could see the court vision that he developed throughout the periods of his high school career in which he played point guard. And although he finished with only 3 assists, there were countless other “hockey assists” that resulted in open buckets after swing-swing passes. Whether it be from the perimeter or from the blocks, Parker made the proper decision with the rock and didn’t feel uncomfortable at all, even though he even spent some time playing center.

“Coach K is doing a great job putting me everywhere on the floor,” he said. “I don’t have a structured position. I get to go inside-out, and that’s what I’m comfortable with.”

The lack of having a structured position may have hurt Jabari on the glass. Finishing with a rather pedestrian 6 rebounds, there is room for growth on the defensive end. Duke will need him to defend anywhere from the 3 to the 5-spot if they hope to make a run deep in March.

“Jabari has a lot to learn and he wants to learn. He does have to rebound better,” Krzyzewski said. “He was really outstanding tonight. His first game in college? Are you kidding me?”

There was another hyped freshman who had his opening college game on Friday: Andrew Wiggins. The projected top pick in the 2014 NBA Draft helped Kansas cruise to victory over an outmatched Louisiana-Lafayette squad, making Parker up next. The two posed for the cover of of SLAM 167 together but never played an official game against each other while in high school. With every NBA team set to be represented for Tuesday night’s battle in Chicago, there are Draft slots to be risen, pride to be gained, and legacies to be stamped.

“He’s a good player who is real athletic and real fast. The guy is really good,” Parker said. “You have to show your ‘A’ game against him. Everyone knows that he is a good player.”

While everyone is concerned with the mano-y-mano battle of Parker and Wiggins, it was absolutely clear that the focus was not about two 18-year-old future pros going at it—but about two teams vying for a National Championship.

“He’s not to talk about him and Wiggins. This is about Duke and Kansas,” Coach K said. “They’re huge. A lot of people feel that the big kid who comes off the bench (Joel Embiid) is the top prospect in the country for the pros.”

Parker added, “I need to keep to the game plan and not go outside of what we want to do. I have individual goals, but I need to put those aside. What’s most important is the team. Duke versus Kansas.”

Finally back to at full go after dealing with nagging injuries for the past year, the real Jabari Parker is back again. The clean bill of health is evident in both his first step and leaping ability. While everyone has reiterated that it is all about the team, an able-bodied Parker will be essential in his squad’s chances of beating Kansas—and Wiggins.

“It’s been good. I felt like I was back in the summer time,” he explained. “I went to KD Camp and I did OK, so I was back a long time ago and it’s all about building from this point on.”

And that point, both as an individual and a team, begins at 9:30 EST tonight on ESPN.