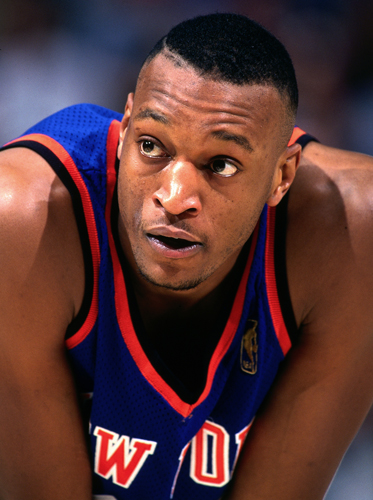 John Wallace’s basketball itinerary reads like a story from a New York State Atlas. Born in Rochester, Wallace was the 1992 State High School Player of the Year and led Greece-Athena to an unbeaten record and the state championship. He next headed up the I-90 East to Syracuse where he fittingly took the university to the first NCAA Championship game held in the greater New York Area in 50 years.

With 131 points and netting a game high of 29, John was the 1996 tournament’s high scorer. Wallace completed his own version of the New York basketball tri-artic (playing high school, college and professionally in state) as he traveled back down US17-South and the hometown Knicks selected him as the 18th pick of the 1996 Draft—an absurdly illustrious draft class featuring Kobe, Iverson, Nash and Ray Allen.

Wallace’s 10-year pro career took him outside the 54,556 square-miles of the Empire State to destinations as domestic as Detroit, Phoenix and Miami and as international as Toronto and Italy. And though his jersey and mailing addresses changed, he never got rid of his New York State driver’s license.

After retiring from the game, John began working for the Knicks alumni and community outreach program, became involved in several businesses and focused on raising his children. John’s commitment to fatherhood stems from his early memories of his dad being incarcerated. The trajectory of his youth came to an impasse at age 14 when he and some peers stole a car. John felt uneasy and left while the others consummated the robbery, eventually getting caught and doing time. That epiphanic moment made John realize his good fortune and he began to cultivate his “well beyond average” scholastic and athletic gifts. John spent his days in honors classes and nights in the gym.

So resonant are the proxy notions of guidance, direction and care toward young people for John, that he and his childhood friend, Modie Cox, created Winning Because I Tried, a non-profit initiative that goes into schools upstate, the Bronx, Queens and Brooklyn to ensure that foundational mechanisms are in place for those students to succeed in and out of the classroom.

Speaking to high school students from Brownsville, most of whom have been through the juvenile detention or foster care system, John, who still looks like he can play (at least for the Sixers) shares, “There are rules, but we have multiple chances and people don’t decide our fate…we do.” So impactful are his words and program that last November, the Starlight Foundation honored John for his philanthropy work in NYC.

Most recently John started doing radio color commentary for the Knicks. “That’s a terrible call,” he exclaimed with a smooth dulcet voice and a wonderfully infectious laugh during a west coast Golden State game. This broadcast was almost 18 years to the day—April 1, 1996—when John, drifting near the foul line and moving sideways to get into his defense set, received a questionable whistle that officially ended his college career and Cuse’s chances for a Championship.

“I have complete understanding of the difficulties of being a basketball official, but I just wish there was more accountability.” Before leaving the Meadowlands Arena that night he had a “not very empathetic” moment with each referee working the Syracuse-Kentucky championship game. His biggest disappointment was not being on the floor for his team.

John Wallace, who got a 1200 on his SAT (when they only went up to 1600) is smart and reflective enough to know that while the officiating may or may not have affected the NCAA final game that year, his fate and future were up to him. “We work hard to create our own luck and misfortunes,” he muses. The roadmap of John Wallace’s life has been continually repaved and occasionally re-routed to avoid detours and traffic. Just like the imposing terrain and solid infrastructure of the state he calls home, John Wallace is large, important and resilient.