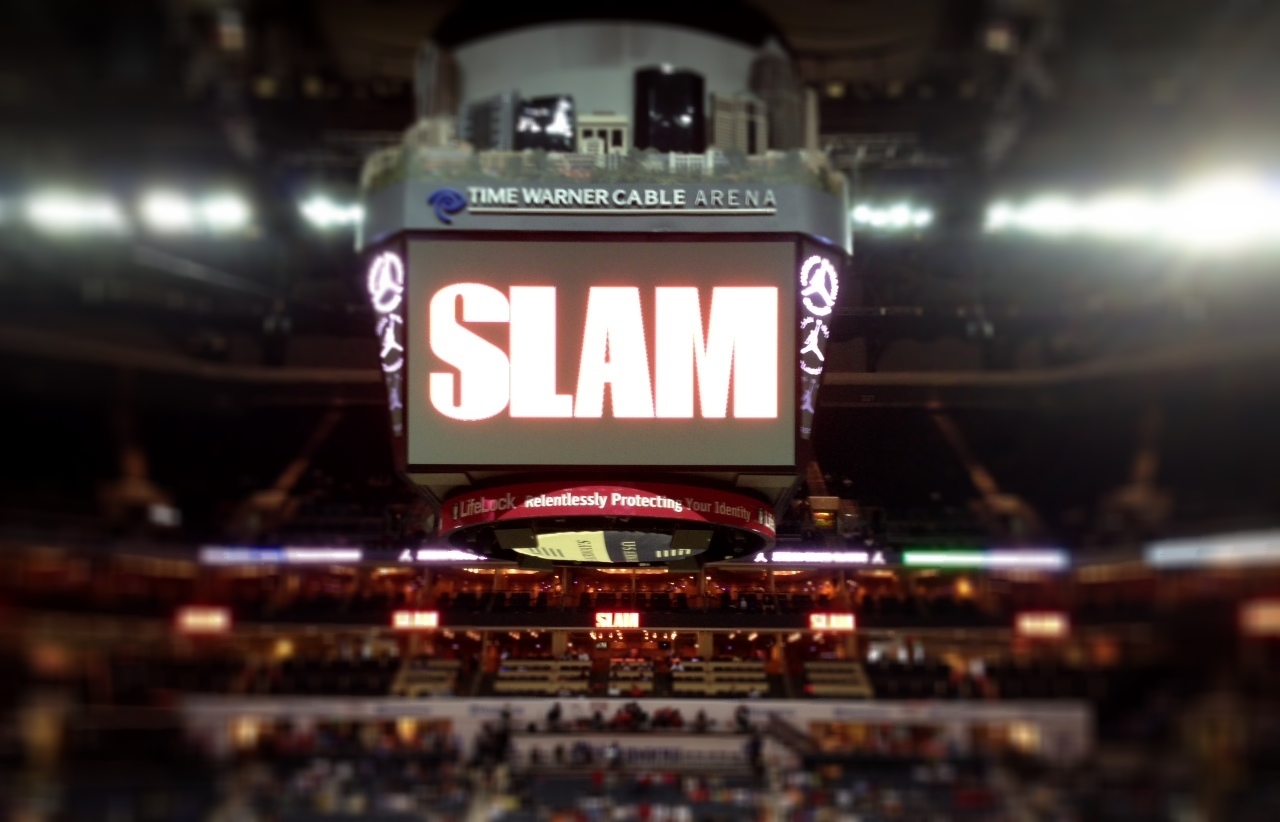 You aren't with us shootin' in the gym! Wait, yes you are. Welcome.

What’s up everybody? We’re live from the Time Warner Cable Arena in Charlotte, NC.  Jordan Brand Classic time, which means another year of the “Next Versus Next” a showdown of top-tier future college superstars who will be NBA prospects and superstars in no time.  Thanks for checking in and rocking with SLAM and myself!

Last years game had an incredible roster of talent headlined by recent National Champs, Michael Kidd-Gilchrist and Anthony Davis. (Last years ’11 SLAM All-Americans weren’t too shabby) This year (wait until you see the ’12 All-Americans!) won’t be short of any future big time players either with a game headlined by guys like Kyle Anderson, Nerlens Noel, Shabazz Muhammad, Steven Adams and Anthony Bennett just to name a few.

We’ve been down in the Queen City since Thursday and have loved watching these young guys compete in practice. If the last two days of practice have been any indication, this game won’t be short of big plays.

As almost all all-star games work the 1st half should be a offensive showcase with a ton of dunks and minimal defense with a competitive 2nd half where you see guys turn up the defensive intensity and try to get a win in their last high school contest.

Before the main event got started, there was an International Game and the Regional Game. The International Game, played between the “Blue” team and the “White” team, featured some great skill players was close throughout and went into overtime with a White Team victory. The most impressive players came down to a battle of the bigs, with MVP of the White squad 6’8” Center, Lucas Silva Dias and Blue squads 6’8” Center, Marko Arapovic. Equally as impressive was White Team undersized guard Federico Mussini with 21 points and 4 dimes.

Game 2 of this triple-header was the Regional Game which featured a ton of super athletic Carolina kids taking the floor putting the East squad against the West. Hands down the most exciting guy was Virginia Tech bound Forward Montrezl Harrell who put on a one man show with a multitude of put back jams over defenders and big blocks. Harrell’s performance earned him MVP honors with 22 points, 11 rebounds, the game winning block and a 84-82 victory for his East team over the West.

Two great opening games with the All-American game on deck, ESPN, tune in and hit us up -SLAM is watching with you!

10 minutes and counting until tip.

East out of the gate early in transistion. Tokoto with the put back jam and Kyle Anderson with a long 2.

Quick 10-0 run for the East. Much needed

Hip-hop is well represented at the JBC. Jadakiss, Fat Joe and Big Tigger all here with a Fabolous performance following the game.

West cut the East lead to 7 after a big Shabazz Muhammad slam. The lefty has serious game.

Rasheed Sulaimon will be a big time player for Coach K and the Blue Devils. Knows how to run the show and also create for himself.

Some undecided big names still out. Will Coach Cal and the Wildcats reload (again)?

50-45 East squad over the West at halftime. East out rebounding and also big in transition.

Kyle Anderson probably most impressive overall in the 1st half. Ability to shoot and distribute the rock. Great skilled point.

2nd half underway, dunk from Kentucky bound Archie Goodwin to set it off.

Isaiah Austin with a quiet 10pts and 8 boards so far in a guard driven game.

Defense heating up Nerlens Noel on the block in transition that was called a foul. Right around the 10 minute mark is when guys realize it’s time to compete for the victory on defense.

Shabazz Muhammad with the crazy baseline dunk. The West squad is running away with things leading the East 83-65 with 11min remaining.

Anthony Bennett (SLAM Jordan Diarist) is going to be tough to defend in the post for a lot of guys. Physical and a wide-body who eats up space but can face up as well.

Under 3min to play and it’s getting physical. Lot of tough play down low, charge call and now a technical foul called on the West Team’s bench. Archie Goodwin hits both free throws for the East to put them within 4pts.

Rodney Purvis is doing work and probably headed to MVP honors with 19pts.

Come down to a 2pt game with the West up 97-95. Shabaaz Muhammad at the line and misses the front end of a 1 and 1. East can’t complete the layup at the other end and Muhammad gets fouled in transition and is now back to the line.

Muhammad knocks down both. West with the 4pt win 99-95 over the East squad. Great game overall. Lot of young talent and athleticism. Stay tuned for the MVP announcements and thanks for rocking with us!

Rodney Purvis and Shabazz Muhammad take home the MVP honors and are at half court getting presented the trophies by Jordan Brand President Keith Houlemard.