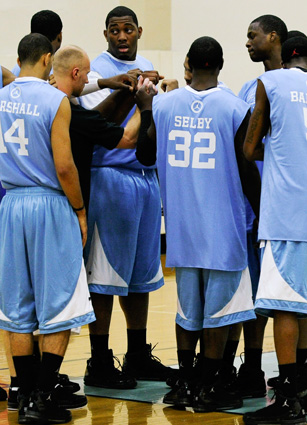 Live from the Mecca of Basketball, the best of the best from the class of 2010 will lace up their Air Jordans for one last time as they take part in the final game of their high school careers. After four years (some more) of dreaming of culminating their prep careers playing as All-Americans at biggest stage of them all, and in front of “His Airness” himself, dreams have become reality and now the only thing left is to thread the board.

Playing in such prestigious game isn’t the only dream we’ll witness these blue chippers realize tonight. Two of the more sought out recruits in America will be announcing where they will be attending college in the Fall. Josh Selby, a 6-3 guard from Baltimore, will be announcing his commitment at the 12 minute mark of the first half. He has narrowed his list of contending schools down to UConn, Arizona, Kentucky, Kansas and Kentucky. At the 12 minute mark of the second half, 6-4 New York City native and Oak Hill standout Doron Lamb will reveal to the world his college of choice.

On Thursday afternoon, SLAM orchestrated a dope photo shoot with some of the All-Americans right in the middle of Times Square. Be on the look out for those shots in the new issue coming out in a few weeks. We then chilled with the boys and had dinner with them at the Westin Hotel in Times Square.

Yesterday, the boys really took it easy at practice by only doing drills and running sets, much to the disappointment of all who were on hand looking for a scrimmage. But it’s all good, as tonight we get to see them on actual game mode.

Common is slated to perform at halftime and many more celebrities are expected to be in attendance, as it has been the case throughout the years. I’ll fill you guys in as I see them in the building.

We’ve already had two games in the books with the regional game (Suburban defeated City 137-133; led by Fuquan Edwin and JJ Moore who finished with 26 points each) at 3:30 p.m. and the international game (White defeating Black Jerseys 72-71; led by Canadian native Duane Notice’s 23 points) at 5:30 p.m.

The game is being broadcast live on ESPN2 for those who want to follow along.

But the wiser move would be to follow the game right here with us online!!!

So lets get to the rosters real quick:

-A minute left before tip-off, no sign of MJ yet.

-We’re ready for the starting lineups!!

-D. Waiters hits a lay up to start things off.

-D. Lamb is taking shots every time he gets the ball. And who could blame him?! This is his hometown after all.

-Chris Paul is in the building! He played in this very same game in 2003.

-Internet is starting to get slow now. Not a good sign.

-Selby doing his thing while getting other involved. Off-the-back pass to Barton for the dunk and minutes later an alley-oop to our diarist Terrence Jones.

– Josh Selby has just announced that he will be a Kansas Jayhawk!!!

-Barnes soars for a one-handed jam.

-Tristan Thompson with a put-back dunk off the miss from fellow Canadian and high school teammate Cory Joseph.

-No sign of Jordan yet with 9 minutes to go in the first half.

-Brandon Knight with a nice alley-oop to C.J. Leslie.

-Will Barton has such a smooth game. His baskets seem effortless at times.

-Joshua Smith is quietly putting in work in the paint! Got 10 points so far.

-Selby and Knight going at it!

-Kyrie Irving got the crowd buzzing as he puts the ball between Cory Joseph’s legs on his way up the floor for the feed and basket.

-Tristan Thompson holding his own with the steal and basket. He got 12.

-K. Irving is heating up as he hits a 3-pointer.

-Tristan Thompson is most definitely on his way to a double-double with the way he is playing. He got 12 points and 6 rebounds so far.

-Irving shakes up Joseph with the crossover who ends up fouling.

-So there’s a rumor going around that Doron Lamb will be committing to John Calipari and the Kentucky Wildcats. We will find out if it’s true in a few minutes.

-Common performing at half. Mic on one hand and basketball on the other…through the legs, around the back and all!

-Did Common just get on the floor and breakdance?! Yeah, I think he did.

-At the half, Tristan Thompson leads all scorers with 12 points. Doron Lamb, Harrison Barnes, and Terrence Jones with 11 points each for the West squad.

-For the East, Kendrick with 10 points. Only player in double-figures.

– Irving and Leslie are trying to bring the East back.

-East starts the second half on a 10-2 run behind Sullinger.

– Brandon Knight’s no look pass to Reggie was a beauty.

– Knight doing a great job distributing the ball as the East closes in. West only up 88-83 now.

-Defense wins games and the East seems to have figured that out.

-The East has outscored the West 29-16 in the first 12-and-a-half minutes of the second half.

–Doron Lamb has announced that he will be a Kentucky Wildcat!!! As we had previously speculated.

– Tristan Thompson with a facial!

-Irving with the basket, then steals the ball and gets the lay-up.

-Selby lobs one to Barnes for a crowd pleasing jam!

-Irving goes coast-to-coast for a acrobatic layup to cut the lead to 127-125.