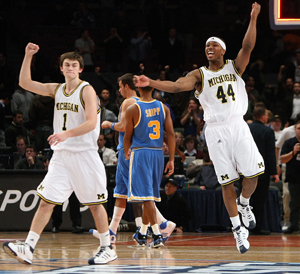 The measure for greatness in college basketball is consistency; it is also the greatest challenge. The UCLA Bruins, long considered the gold standard of elite programs, were a model of consistency during the 1960s and 1970s, winning an unprecedented 10 national championships in 12 years.

The western power returned to the upper echelon of the college basketball stratosphere in recent years, reaching three consecutive Final Fours under the guidance of head coach Ben Howland. While a majority of pundits predict a fourth straight appearance this season, a closer examination reveals that the Bruins may find themselves watching the action in late March, rather than partaking in it.

UCLA could lay claim to being the most battle tested team in the nation last year. Aside from freshman Kevin Love, every other player on the roster that saw significant playing time had experienced the rigors of March Madness. With the departures of Love, Russell Westbrook, Luc Richard Mbah a Moute and Lorenzo Mata-Real, the Bruins lost a whopping 50.2 percent of their total minutes played last year. This loss of experience will force Howland to rely heavily on a combination of unseasoned veterans and a recruiting class isn’t necessarily ready to carry a team.

When talking about the potential for UCLA’s success this season, the story starts with Darren Collison. Arguably the best point guard in the country and a safe bet to be rocking an NBA uniform next season, Collison brings a lights-out perimeter shot and tough defense to the floor. What the senior will need to bring in order for him team to be successful, though, is a great capacity for scoring. The Bruins spread the ball offensively last year, placing four players in double-figure scoring averages, but that luxury of consistent scoring from multiple personnel may be gone. Collison’s scoring numbers have increased slightly to start to year, but he has never been a player who will score a ton of points on a regular basis. A 33-point outburst against Oregon State and a gutsy 28-point performance against Stanford were the highlights for Collison last season though neither team possessed a solid backcourt.

Highly touted freshman Jrue Holiday will be able to score at will one day, but it won’t be this year. Holiday is more point guard than shooting guard, but due to the

incumbent Collison, the new kid in town will be forced to play off the basketball. While he possesses a good looking shot and basketball sense, his athleticism isn’t anything special, which will hinder him against stiffer competition. Alfred Aboya could average close to double figures in scoring, but he is too inconsistent at this point to be relied on as a regular means for offense. Josh Shipp has been and will continue to be the second scoring option behind Collison.

Russell Westbrook’s departure to the NBA hurt this team a lot. In Westbrook and Collison, there wasn’t a better defensive backcourt in the country. Westbrook’s ball hawking abilities that made him the no. 4 pick last June made him a deadly weapon in college. Holiday, the man replacing the current NBA rookie, isn’t nearly as physically gifted. His lateral quickness, leaping ability and length are all sub par when compared to Westbrook’s freakish physical skills. The Bruins will have their issues when they take on some of the more elite guard combinations come the postseason.

Where did graduation and the NBA hurt UCLA the most? Inside. This time last year, the kids in blue and gold sported a three-man wrecking ball of a frontcourt rotation, consisting of Love, Mbah a Moute and Mata-Real. The first two are now pulling in a steady paycheck in the League, while Matta-Real spent his summer with the Lakers summer league team. Let’s call that a frontcourt consisting of 2.5 NBA players.

What does the interior rotation look like this season? A trio of unproven players made up by Alfred Aboya, James Keefe and Nikola Dragovic. At best, Aboya might get an invite to a summer league team, but there is almost certainly no future NBA ability out of those three. While the solidness of Love and the athleticism of Mbah a Moute and Mata-Real could hold their own against players like Brook Lopez and Tyler Hansbrough, players of that caliber will find the Bruin’s frontcourt much more appealing this season.

Don’t think these changes in the program will create problems? They already have. In a close -call victory over Miami (OH) the Bruins were slow to contest shots on the perimeter, allowing a 7-15 performance from beyond the arc by the RedHawks. In this same game the lack of scoring balance reared its ugly head, as only Collison and Shipp reached double figures.

In their next game–a loss to Michigan–UCLA showed even more cracks in the foundation. The Wolverines spread the Bruins out and killed them with backdoor cuts

and one-on-one isolation situations. Without the athleticism and length of Westbrook and Mbah a Moute prowling the court, defenses will have much more success against UCLA if they can force them to step out on the perimeter. This spreading of defenders also leads to more opportunities inside against the frontcourt. DeShawn Sims and Manny Harris were both able to get inside for their points in the Michigan win.

What both of these games showed is UCLA’s inability to capitalize in slower games like they have in the past. Whether it was a bomb from Collison or a hard-earned lay in by Love, the Bruins were able to grind it out against teams in the half court set. So far, they haven’t shown that same ability in the early part of the season.

There is still talent on the UCLA roster; there is still ability. Let’s face it, losing the type of NBA talent the Bruins lost from last season is hard to replace. While Ben Howland brought in a great freshman class, this year’s freshman crop is a step down from the phenomenal class of 2007-08 (on a national scale that is). This team will improve as the season ages and the youngsters gain experience, but when they meet a well-coached, experienced team in March, it will spell their end.