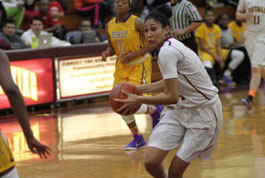 The 2014-15 season has been anything but easy for Christ the King Girls’ squad. They’ve had to navigate through a very tough schedule that has included the likes of NYC powers Nazareth Regional, Molloy, Mary Lewis Academy and Bishop Loughlin (ranked No. 1 in New York City by MSG Varsity at the time) in consecutive games in the same week.

The trials and tribulations have been noticeably tough on the Royals, but it nonetheless did not prevent them from finishing the regular season with a record of 14-7 (9-1 in divisional games) and clinching the CHSAA Brooklyn/Queens Division I girls’ basketball title. Although it’s been nothing short of a group effort, one player in particular has been the main spark for the Royals this season.

Kaela Kinder, a 5-10 junior guard at the Middle Village school, has been the go-to option for the Royals during many occasions, and may be one of the most underrated prospects in New York City. She is known for her athletic off-guard handles and for attacking the basket in transition, and according to head coach Bob Mackey, was referred to as her team’s X-factor in the preseason. Coach Mackey believes that when Kinder is playing better, so is the team.

She is a well-rounded prospect who does a bit of everything on both ends of the floor. On offense, she can either hit you with a quick jump shot or catch you off the dribble and attack the basket. On defense, her wingspan gives her an advantage over opponents and she is always one of the first players attacking the glass when the ball goes up. Her 5-10 stature allows the upper-hand on many defenders, especially with her exceptional ball handling skills.

Her versatility ends up being the dreaded can-do-it-all scouting reports for opponents. She scores, grabs boards, moves the ball and does the small defensive things that lead to blocks and steals. In a game against Mary Lewis Academy at Nike’s Zoom City Arena during NBA All-Star Weekend, Kinder put up 10 points, 17 rebounds, four assists, two blocks and two steals.

She has received many Division I offers from the likes of St. John’s, Seton Hall and others.

Kinder is flourishing in a program that has produced some of the best female hoop stars in the game. She follows in the footsteps of WNBA All-Stars and Olympic Gold Medalists Sue Bird, Chamique Holdsclaw and Tina Charles, all former Royals and recipients of an array of accolades  during their time at Christ the King. Each were named Women’s Basketball Coaches Association (WBCA) All-Americans and won at least one New York State Championship in high school. With the numbers she’s been putting up lately, Kaela could very well be on her way to joining the ranks of her predecessors.

What is her fuel? She gives credit to one person as her sole motivator.

The Far Rockaway native has always done her best to make her number one fan proud. You can always find him at Kinder’s games in the same seat at CTK. John Kinder, her father, has been sitting courtside at his daughter’s games since Day 1.

On February 18th, however, Kinder had to do something she had never done before. Her father was scheduled to have hip surgery that day, and with the CHSAA Brooklyn/Queens Division I girls’ basketball title on the line later that night against rival Bishop Loughlin, Kinder had to step on the court without that familiar face and voice on the sideline. This would be the first time ever that she played a game without her father physically there to cheer her on. Instead of letting that be a distraction, however, she used it to her advantage.

Ever more inspired, she played with a chip on her shoulder. She posted a game high 25 points en route to a 69-56 victory over Loughlin. “My dad never missed a game before, and this morning he had surgery so I was just playing for him,” Kinder said after the win.

Playing with a high level of intensity at all times, her focus has not just revolved around outperforming her opponents but also in making her teammates better. Although she is good at scoring the basketball, she can also read the defense and find open teammates.

The road for Christ the King did not get any easier, as the top seeded Royals had to prepare for the diocesan playoffs, a challenge Kinder was ready to overcome with her teammates. When asked how she’d prepare for the playoffs, Kinder simply answered, “Just being smart and continuing to stay on the right track, and not letting my composure get the best of me.”

And that’s exactly what she did en route to capturing the CHSAA Class AA state championship.

As expected, it was a tough road that found the Royals battling their their way to the CHSAA state semis – a place they had found themselves just one year prior. Kinder and her team wanted this year’s result to be different, however. Behind Kinder’s 16 points and 10 rebounds, the Royals avenged their semifinal loss from a year ago and defeated St. Anthony’s to advance to the finals.

The championship was a close one throughout, but an 11-0 run in the fourth quarter helped Kinder and her squad to a 62-55 victory over Archbishop Molloy for the elusive state title. And as the Royals now look ahead to the New York State Federation Tournament in Albany, Kinder continues to her breakout season in hopes of cementing her legacy in a program that has plenty.