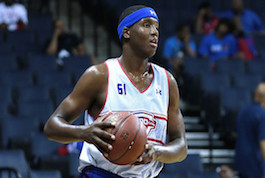 As of this morning, Bill Self had yet to receive a commitment from a single player in this fall’s incoming freshman class. That all changed by the afternoon, after Carlton Bragg, a five-star power forward and top-20 national prospect in the class of 2015, committed to the Kansas Jayhawks. The Cleveland (OH) native also seriously considered Kentucky and Illinois.

More from the Kansas City Star:

On the final day of his official visit to Kansas, Carlton Bragg sat down with men’s basketball coach Bill Self and discussed his future. It was Late Night in the Phog weekend, and Bragg, one of the nation’s top high school power forwards, was hoping to have the right connection with Self.

More to the point, he was hopeful that Self envisioned the 6-foot-9 Bragg as a power forward — just as he did.

“I see myself as a power forward,” Bragg would tell Rivals.com after his visit. “So that’s what I wanted to hear from Coach Self.”

Self agreed with the sentiment, and Bragg’s visit to Kansas went about as well as can be expected. He sat inside Allen Fieldhouse during the annual Late Night in the Phog, soaking in the raucous cheers reserved for the recruits in attendance. He spent time hanging out with Kansas’ current players, including Perry Ellis and Devonte’ Graham. He bonded with Kansas assistant Norm Roberts, who served as his main recruiter for most of the process.

The visit to Kansas — and his connection with Self — is one reason Bragg was ready to commit to Kansas on Thursday, even after maintaining for months that he would wait until the spring. Bragg, a Cleveland native, officially announced his decision to attend Kansas during an afternoon ceremony at Villa Angela St. Joseph High School in Ohio.

Wearing a red and blue tie, Bragg put on a KU hat and first said “Kentucky” before correcting himself and saying “Kansas.”

Bragg, who picked Kansas over two other finalists (Illinois and Kentucky), becomes the first official commitment in Kansas’ 2015 recruiting class. Rated as Rivals’ No. 14 overall recruit in the senior class, Bragg becomes the latest five-star prospect to say yes to Kansas.

For Self, the addition of Bragg should fill a rather noticeable need in the 2015 class: Size. On a quiet day last summer, as Self took part in a charity event in Kansas City, he outlined his recruiting goals for the following nine months.

“We know we got to get bigger,” Self said then. “So if I were going to say there’s a need, the need would be size. But we don’t have a senior, and we don’t know how many (players) we’re going to lose.” 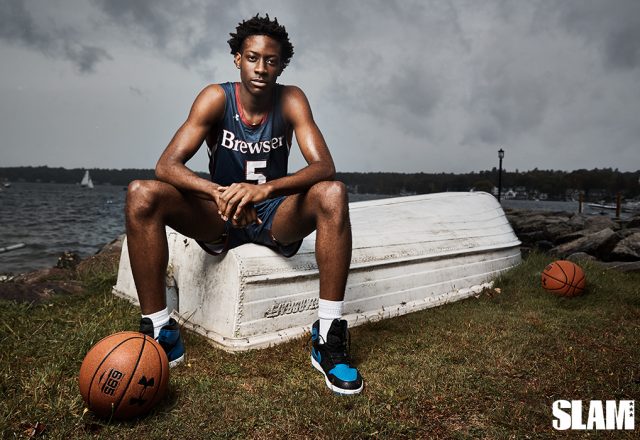