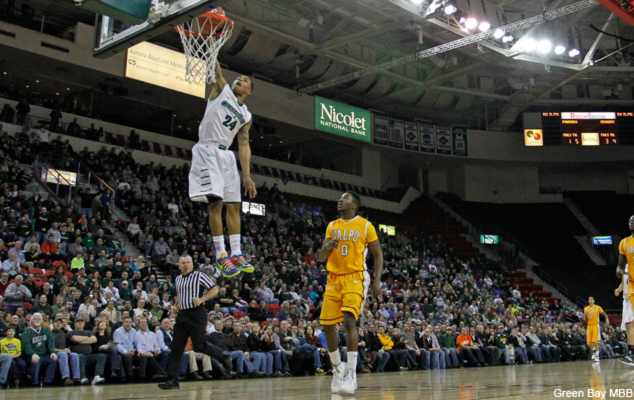 He is that rare Dairy State commodity, a Chicago transplant beloved in prime Cheesehead country.

It’s kind of funny, says Keifer Sykes, the Green Bay junior guard known across the country for his rim-rattling dunks. He’d never met so many fans of a single team before arriving in Wisconsin. “It’s crazy how much they hate the Bears,” he says of the Packers faithful, chuckling. “They get super-serious about that rivalry.”

Including Sykes, there are five players on this season’s Phoenix roster who hail from the Chicago area. Then there’s the kids from Wisconsin—four in total, including sophomore guard Carrington Love from Milwaukee.

Along with Bears/Packers, that means a line is drawn between Bucks and Bulls. There’s always chatter about which city produces the better players. Sykes touts Windy City legend Derrick Rose, only to be met with an immediate retort from Love about the next big thing from his hometown.

But don’t let these ‘rivalries’ fool you—this is one of the tightest-knit teams you’re likely to find. That three other states and one other country (Canada) are represented just adds to the fun. Green Bay head coach Brian Wardle has worked painstakingly with his staff to bring together this group of kids that, despite such disparate beginnings, have grown into a cohesive whole.

“I haven’t been around a team that will sacrifice for each other like this one,” Wardle says on the phone on a recent Monday afternoon. “There’s no hidden agendas, selfishness, complaining about playing time or parents calling me about it—we don’t have any of that. They’re all about winning.”

These kids starred for successful teams at the prep level. They recognize the importance of family. It’s one reason why Sykes (20.3 points, 4.9 assists, 2.3 assist-to-turnover ratio), from inner-city Chicago, and 7-1 senior post Alec Brown (15.6 points, 5.7 rebounds, 3.2 blocks), from Minnesota, have become one of the most dynamic tandems in basketball.

“We have upperclassmen like Brown and Sykes, our two leaders, who are completely humble and unselfish and want the team to succeed,” Wardle says. “A lot of players say it, but they do it. Our freshmen and sophomores see it and it becomes contagious. That gives you a chance to have a special team.”

Which is a pretty spectacular season. In mid-November, the Phoenix pushed in-state BCS power Wisconsin to the brink before salting away Virginia, now-ranked No. 6 in the country, 75-72. Sykes dropped 32 against the Badgers, and posted 21 points and 10 assists against the Cavaliers.

With a 67-53 win over Valparaiso on February 20, the Phoenix clinched the Horizon League regular season title for the first time in 18 years. “It was a great feeling,” Sykes said on the phone, five days later. “It was great to embrace that with the coach that recruited me, the people who helped me with extra film sessions and extra repetition, and all the guys I came in with.”

On March 2, Sykes was named the Horizon League Player of the Year. At the end of the regular season, he was one of just two players in the country averaging better than 20 points, 5 assists and 4 rebounds per game. (His distribution has since “dipped” to 4.8 dimes per game.—Ed.) He was named conference player of the week six times, giving him an unprecedented 10 for his career.

Whether Green Bay is an NCAA Tournament team is, unfortunately, up in the air. In one of the crueler twists of the college basketball season, the Phoenix lost to heated rival Milwaukee 73-66 in an OT thriller this past weekend in the semifinals of the Horizon League tournament. For a league frequently referred to (this season, that seems particularly unjust) as “one-bid,” it did not bode well.

But this team’s theme is Strictly Business, and that’s exactly how they’ll approach these final throat-clutching days before Selection Sunday. They’ll focus on getting healthy. It wasn’t until late February that Wardle could hold a practice with his entire roster.

Sykes will lead the way. The Phoenix have won 24 games (against just six losses) in large part because of their special blend of camaraderie. “We didn’t want the competition to come from within the program,” says Sykes. “We wanted competition to come from our opponents. Our guys want to do whatever it takes to win. That’s why we’re in this position.”

Let’s start with the gym.

Sykes’s father, James, operated a recreational center on the North Side of Chicago. From the time he was 2, Sykes could totter on to the court and play whatever sport he pleased.

James had played football, and his love for sport was passed on to Sykes and his siblings. As Keifer continued to grow as a basketball player, James made sure his son found the right people to further his journey. He helped implement that vaunted toughness so synonymous with top Chicago talent.

Sykes starred for Marshall High, just a 10-minute drive from the United Center. His extraordinary leaping ability was burnished thanks to an interesting practice schedule. The Marshall girls and boys varsity teams shared the gym for about an hour each day, so when they didn’t have the court, Sykes and his teammates ran. Across hallways, up stairs—didn’t matter.

Then, they’d add in segments of calisthenics. Then, they worked on defensive assignments, using the angles allotted to them in the narrow hallways. Other teams weren’t doing this. It gave them an edge.

So did a twist of fate.

According to Green Bay assistant director of athletic communications Ryan Hartwig, Sykes played half his freshman season for the Phoenix as a 17-year-old. He was the youngest player in college basketball, and he averaged 11.2 points and 3.4 assists while hitting 46 percent of his shots.

“I started school early,” says Sykes, “and I couldn’t tell you why. My mom was in charge of that, and I ask her all the time why she did it. But it wasn’t that difficult when I got to college. I worked hard. I’d accepted that.”

How Sykes got to Green Bay came by way of another twist.

Wardle was born and raised just outside the Windy City, in the West loop, and he has long maintained that it is one of the premier locations for hoops in the country. A Phoenix assistant since ’05, Wardle made Chicago a priority when he became head coach in 2010.

Green Bay is just a three-hour drive north, doused in serenity. It offers an entirely different setting from Chicago, which Wardle accurately reasoned many recruits might find appealing.

That’s applied to transfers as well. There are two assistants on the staff with Chicago ties, including Chrys Cornelius, who as an Eastern Illinois assistant recruited Sykes. Alfonzo McKinnie, a junior 6-8 Phoenix forward, began his career at EIU, but when a coaching change loomed following the 2011-12 season, he decided to transfer.

Sykes snatched up the opportunity to recruit his best friend. Once they’d starred on the Marshall High varsity, with McKinnie a year older. How cool would it be if they could finish their collegiate careers at the same school? McKinnie jumped at the chance.

After Eastern Illinois granted McKinnie his transfer request, Sykes came into Wardle’s office and asked about bringing McKinnie on board. “Keifer said he thought I’d like McKinnie, and that he’d fit in the locker room. That’s always my biggest question; we’ve learned exactly what we want.”

Sykes told Wardle that McKinnie was all about winning. When Wardle met McKinnie, he was taken with his gregarious personality. McKinnie raved about the atmosphere at Green Bay. These coaches embraced the players. He could see himself thriving in that type of environment.

After sitting out the 2012-13 season, McKinnie underwent surgery for a right knee injury this past October, and has appeared in just seven games. But Wardle raves about his impact, and can’t wait to see him rediscover his full measure of bounce. In the loss to Milwaukee, McKinnie posted 5 points and 5 rebounds in 18 minutes.

That’s Chicago toughness for you.

McKinnie met Sykes when Sykes was a sophomore at Marshall. During McKinnie’s senior season, he remembers Sykes helping erase a 15-point deficit against Chicago Foreman in the Public League Playoffs. Sykes finished a perfect 10-10 from the free throw line to seal the 65-59 win.

Back then, it was Sykes who’d cheer for McKinnie during dunk contests. Then the story shifted, McKinnie remembers, and Sykes beat him in one.

“His jumping ability is just getting higher and higher,” McKinnie says.

As a Green Bay freshman, Sykes led by example. As a sophomore, he became more vocal. Ahead of his junior season, Wardle met with Sykes. You can guess at the topic. “I told him I needed him as a point guard to take over certain situations, and to be more vocal,” says Wardle. “The locker room is key.

“And as a junior, he’s really taken that stride. He’s a loveable guy, but I tell him that a leader is sometimes alone if he speaks his mind. And as a leader I need him to be able to do that.”

The summer after Sykes’s freshman year at Green Bay, James passed away. Carrington Love, a sophomore on the Phoenix team averaging 7.8 points, has also lost his father. Their birthdays fall within two weeks of each other, and Love calls him a “big brother.”

There’s a genuineness to Sykes inherent in great leaders, says Love. It helps build unbreakable bonds. “Off the court, he’ll do anything for a teammate or his family. If anyone needs help, he’s there, he doesn’t mind. Everything comes from the heart. I love that about him.”

Wardle has imparted a message to his team. Family comes first. Then, this team. “And we have to have that same value of family, with communication and telling each other truths,” he says. “We can’t be holding back feelings or hiding things. We’re direct—I know I am. We’re honest, and that develops and builds trust. They know they’ll get a straight answer from each other.”

For Sykes, that made this Horizon League title all the more special. It was the culmination of so much hard work, and it was accomplished with the closest team he’s ever played for.

Ah, yes, and of course there’s the dunks. There was one that captivated the blogosphere in mid-January, when Sykes came off a screen on the right elbow at Illinois-Chicago and, head going level with the rim, threw down a thunderous one-handed dunk off a lob.

It didn’t surprise anyone associated with the Green Bay team. “Pound for pound, he’s probably the strongest guy on our team,” says Wardle. “And he’s gotten more explosive each year. He’s put in the work in the weight room. His athleticism is God-given, but he’s kept working on it, too.”

That’s a tenet of this program, Sykes says. Strengthen your strengths, improve your weaknesses. He’s put in the hours in the film room improving his grasp on the game, with the flow of the offense. There’s proper stances to learn, positioning to master, hours spent outside of practice tinkering with the mechanics of a jump shot. (A career 45.5 percent shooter, Sykes has gone 81 percent from the free-throw line after hitting 67 percent as a frosh.)

Love knows that the qualities—the composure and cohesiveness, accountability, toughness and grit (all of which were also on display in that Illinois-Chicago game)—are what truly set him apart.

“That dunk was…honestly, we see it every day from him,” Love says, laughing. “I’ve even seen better ones than that.”

It’s that memory from Sykes’s freshman season, when a collision and subsequent cut on his head left two jerseys bloody. After settling into his third new thread of the night, Sykes posted 14 points and 7 assists in a win over Butler.

If the tournament selection committee is watching, how could you not bring this kid into the Dance? 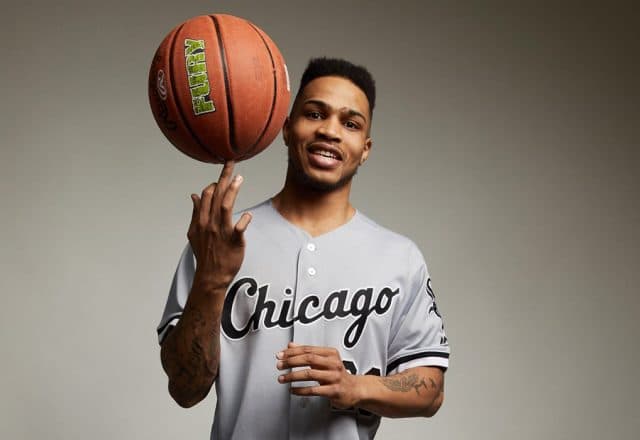