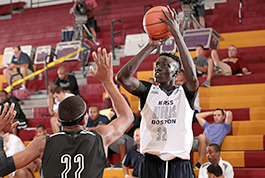 Up until this morning, the Class of 2016 recruiting class had been some-what quiet for John Calipari and Big Blue Nation, with no commitment from a five-star prospect yet. But that all changed earlier today after the Wildcats received a verbal pledge from 6-9 power forward Wenyen Gabriel. Gabriel blew up this summer after impressive outings in the summer youth circuit.

Five-star power forward Wenyen Gabriel announced his commitment to the University of Kentucky on Thursday, giving the Wildcats an important addition to the recruiting class of 2016.

“I really like Kentucky because of how Calipari was recruiting me,” Gabriel told ESPN. “He recruited me (himself) since day one. … His approach has always been the same with me. He’s really excited about me, and I feel exactly the same way.”

Gabriel — a 6-foot-9 prospect from Manchester, N.H. — plays for Wilbraham & Monson Academy in Massachusetts and was one of the biggest risers in the national recruiting rankings over the summer. Scout.com, which did not have him ranked going into the summer, now pegs Gabriel as the No. 10 overall prospect in the class of 2016.

“We’ve seen tremendous growth from him over the past year,” said Scout.com’s Evan Daniels. “He’s grown 2 or 3 inches, he’s such a good athlete and he plays very hard. He runs the floor with ease, he gets his hands on shots. He can step out and make jump shots with consistency. And he can even take the rebound and push the break.”

Gabriel finished the summer by averaging 17.7 points, 14.7 rebounds and 2.8 blocked shots per game at the star-studded Adidas Nations event in Las Vegas.

He joins 6-10 power forward Sacha Killeya-Jones as the second commitment in UK’s class of 2016. Killeya-Jones is ranked by Scout.com as the No. 29 overall senior in the country. Both are considered versatile post players who have the ability to play away from the basket.

The Cats’ 2016-17 roster will also feature incoming freshman Isaac Humphries — a 7-foot center who will play at least two seasons at UK due to NBA age requirements — and New Zealand power forward Tai Wynyard, who is expected to enroll at Kentucky during the middle of the upcoming 2015-16 season.

“We’re all basketball players. We can all play together,” Gabriel told ESPN. “I have no problem guarding any position. I can guard the wing. I can play on the wing … and Sacha can probably do the same. It’s going to be interesting. It’s going to be really special.

Calipari is also still pursuing several other talented post players in the class of 2016, including No. 1 overall recruit Harry Giles.