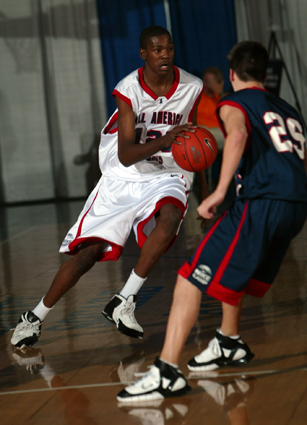 While pro hoopers tend to reach the peak of their abilities in the NBA, we take pride in the fact that we begin covering the world’s best players before they’re the world’s best players: when they’re in high school, still unknown to the majority of the basketball world. This week and next we’ll be looking back at the PUNKS features that introduced a variety of current NBAers to our faithful readers. (Peep what we’ve ran in this series to date at the bottom of this post.) Up next: the Kevin Durant piece below, originally printed in SLAM 92 (November ’05).—Ed.

Kevin Durant probably wouldn’t mind hollering at Nike or Rocawear one day about becoming a pitchman, but as of right now, the only companies the 6-9 sensation screams praises for are Skippy and Smuckers. “I eat a lot of peanut butter and jelly sandwiches,” says the player who’s currently sandwiched between Greg Oden and our own Thaddeus Young in the top three spots of the 2006 prospect rankings. “I eat that every day. That’s my favorite. I put a lot of peanut butter on them!”

So, the secret’s out: Fill up on the lunchtime staple and your basketball skills go through the roof. It probably helps that Durant’s as long as the release-day line for Madden ’06 and he has the versatility of a Hummer H3. Still, PB&J has its place. “One of the things our strength coach recommends,” says Stu Vetter, head coach at Durant’s new hoops home, Montrose Christian Academy, “is that when Kevin is finished lifting, he eats a peanut butter and jelly sandwich because that helps you gain weight and strength. He’s going to get a lot of peanut butter and jelly at Montrose.” Atkins, eat your heart out.

Another thing the 17-year-old Maryland-bred phenom had best learn to digest is all the media attention coming his way. Durant, who starred first at MD’s National Christian and then at Oak Hill (VA) Academy the past three years, has landed at yet another national prep powerhouse for his high-profile senior season. “We’re used to high expectations,” insists Coach Vetter, who’s had a team ranked every year that the USA Today poll has come out and is loaded again this season. “Kevin will simply blend in with these players. We have another three or four D1 players that I didn’t even mention.”

But for some reason, coach can’t stop talking about Kevin Durant. And he’s hardly the only one. Already a top-10 prospect after a junior season where he averaged nearly 20 points and 9 rebounds per (and earned third-team SLAM All-American honors), the lanky superstar took his game to heights the Space Shuttle couldn’t when the summer season tipped off. Whether it was straight dominating at the annual Boo Williams Invitational, earning MVP honors versus OJ Mayo at the NBPA Top 100 Camp or killing in the Las Vegas heat against Oden, people are talking about this Garnett-in-training. Loudly. So feverish was the word on KD’s very consistent outside shot (he hit 42 percent from beyond the arc last season) and smooth face-up moves that many who listed Oden as 1A in the senior class wondered if they needed a 1B for Kevin.

Ask him directly, and the future Texas Longhorn will admit that all the newfound attention “feels good, man.”

No joke—it really doesn’t seem to bother him. Nothing much does. The super-quick Durant doesn’t seem fazed by the new NBA ruling on Draft eligibility (“I’m kind of glad I’m going to college”) or his Amare-like high school travels (“I’m glad I made the move”). Yes, he’s just 17, but the kid’s unflappable.

That is, until the lone drawback of Kevin’s game is brought up. Physically, he isn’t the biggest fella you’ve ever seen in the paint. Kevin could use an additional 20 around the upper body, and he knows it. “I’ve been in the weight room every day since I got back from Vegas,” Durant explains. “I’m probably about 205 right now. By the beginning of the season, I should be at my ideal weight.”

And if that regimen doesn’t work out, a feast on the upcoming competition—and a few more of those carb-loaded peanut butter and jelly sandwiches—should do the trick.