Kings of the City 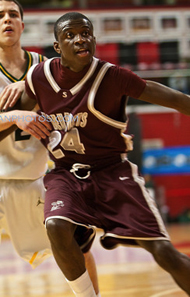 Each year, many of the nation’s top ballers descend to Ohio to take part in the LeBron James Skills Academy in Akron to hone their skills, then put them on center stage in front of college coaches in actual games at the King City Classic in Cleveland. Ryan Jones gave us all the 411 on the LBJ Skills Academy, where the King himself took part in action with all of the campers.

LeBron was in attendance on “D-day” until 5pm in Cleveland.  Our friends at Hoopmixtape stuck around after the action was over to watch “The Decision” with the campers and caught the reactions of many of the next future stars of college basketball. As someone who has lived in Cleveland my entire life and still lives 10 minutes from the Q, it obviously hurt me to see the King take his services to South Beach.  I understand you want to get a ring and that’s fine, but why not do it somewhere where you’ll carry your team on your shoulders? As my man 2Pac says, I ain’t mad at ‘cha. From a fan’s prospective alone though, I would have much rather seen him go somewhere like New York or New Jersey where he would still drop 50 on the regular and potentially go down in that argument for greatest in NBA history.   Now he’s Robin to DWade and playing on a team more stacked than the majority of teams in my fantasy basketball league. The reaction in C-town has been less than ecstatic and local clothing companies such as GV Artwork have shown their distaste through shirts such as this “Lyin’ King” joint.  Enough ranting (for now).

When the ball rolled out on the hardwood, the talent was definitely legit.  The FIBA U-17 World Championships snagged a few of Nike’s top guys, so the camp wasn’t quite as loaded as usual. The top player in the SLAM Fresh 50 for 2011 (and current Diarist), Quincy Miller, and SLAM 2012 Fresh 25 top dawg Andre Drummond both were unable to make the venture to Cleveland due to playing in other events. While this year’s class wasn’t as strong those we’ve been blessed with in year’s past, it was still legit enough to draw just about every high major coach in the country. Most low to mid-major programs didn’t want up making an appearance unless they had an “in” with a player, so it was basically a “who’s who” of BCS coaches that filled the stands.

While college decision makers were doing their thing, we were too.  Here are 10 guys that caught our eye at King City:

Myck Kabongo, 6’2, PG, 2011 – With Teague and Quinn Cook out with Team USA across the pond, Kabongo was easily the top playmaker in Cleveland. The jetison speed that he owns enabled him to get to the cup on just about anyone. Coming off of a killer performance at the FIBA Americas U-18’s in San Antonio where he averaged nearly 20 points and 8 rebounds, it was clear that he still had his swag. The Texas commit should make an instant impact once he hits Austin and should be the next McDonald’s All American from north of the border.

DaJuan Coleman, 6’9, PF/C, 2012 – One of the nation’s very elite sophomores, Coleman was the most dominant big man that we saw in Cleveland. His powerful style of play and 280-pound body was too much for players even a year older than him to handle.  The Jared Sullinger comparisons are definitely there, although he is a bit more athletic and not quite as skilled at this point. The Syracuse native did turn some heads with his outside J though and will certainly be one to watch over the next two years.

Khem Birch, 6’9, PF, 2012 – While this may not be a household name to most high school hoops fans, Birch has as much upside as just about anyone in the class of 2012. Although he could be mistaken for T-Mac in the face, their games are nothing alike.  Khem used his crazy long arms and top notch athleticism to be the top shot blocker the camp had to offer. There is still plenty of work to do on the offensive end for the Montreal native who attends Notre Dame Prep (MA), but the potential is there for him to truly be special.

Rodney Hood, 6’7, SG/SF, 2011 –  Known as a guy who never really put it all together, the Mississippi native has finally began to connect the dots. Everyone always knew that he could bomb from deep, but we got to see all of the other facets of Hood’s game in Cleveland. The lanky wing showed off an adept mid-range game and straight put the clamps on people on D.  No, he’s not the strongest or most athletic guy in the world, but he still gets it done. No wonder basically the entire SEC is recruiting him.

Rodney Purvis, 6’3, PG/SG, 2013 – One of the top five sophomores in the country, it was shocking to see how Purvis was able to get his against top notch comp two years older than him. It may sound silly to say at this point, but he definitely has some DWade in his game with his body control and ability to maneuver himself around defenders in traffic. The consistency on his J still needs to improve (although it’s getting better), but is definitely in the discussion for best freshman in the class.

Nick Faust, 6’6, SG/SF, 2011 – Faust has been one of the hotter names in the last month and a half, showing out at King City after turning some heads at the NBA camp. With great size for a guard, he showed no problems finishing amongst the trees in the paint.  Throw in his ability to stroke it from beyond the arc consistently and you see why this guy is one of the sizzling ones this summer. Nobody really knew how good he was on the national level, but now they do and realize that he could be one of the “next” to come out of Baltimore.

Branden Dawson, 6’6, SF, 2011 –  Not sure if there was a player more unstoppable on the offensive glass than Dawson. The athletic power wing was a tank in the paint, using his explosive first step to smoke fools off the dribble and get to the paint.  Once in the three second area, he exploded up and finished over just about everyone. There is definitely some resemblance to guys such as Corey Maggette and Ron Artest in his game, but Dawson needs to hone his jumper before he reaches that level.

Dezmine Wells, 6’4, SF, 2011 –  It was interesting to see Wells run the show at the point after widely being considered a small forward throughout his entire career. It was clear that he’s not a natural playmaker with the ball in his hands, but he looked really good running the pick and roll throughout the camp. Once the former teammate of John Wall (and now Hargrave Military Academy star) got into the paint, it was over due to his explosive leaping ability and powerful body. The Xavier commit has a chance to be a beast in the A-10, but still needs to increase his range if he hopes to maximize his potential.

Jakarr Sampson, 6’8, PF, 2011 –  After seeing Sampson play nearly 50 times throughout his first three years in high school, I thought I knew his game like the back of my hand. I last caught him at the Spiece tourney in early May when he was a top 75 to top 100 guy.  Fastforward two months and he’s in the mix for top 25 in the class and we can see why based on his improvement. The power forward is a maniac on the court with a motor that doesn’t stop, mixing in some skill as well.  At King City, Jakarr was able to get by just about any big off the bounce and finished acrobatically at the rim. On the defensive end, he used his length and athleticism to seriously disrupt opposing players.  Sampson’s jumper still isn’t quite there yet, but that doesn’t change the fact that he is one of the more coveted big men left on the board.

Kentavious Caldwell, 6’6, SG, 2011 – The fresh Georgia recruit will be the biggest coup that the Bulldogs have had in quite some time. The consensus top 20 player in the country shot the lights out of the ball and easily had the deepest range of anyone in attendance.  What surprised me was how well he was able to create off of the bounce and his nasty court vision. The opportunity is definitely there for Caldwell to put up huge numbers as a freshman and he could very well be Mark Fox’s first McDonald’s All-American at Georgia.