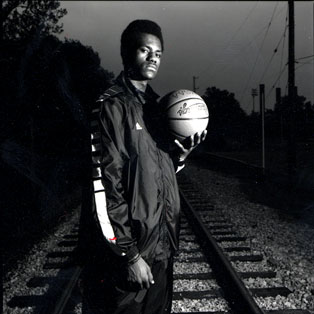 “Are you the one I’m asking for an autograph?”

This from the waitress working the dining room at the Diamond Grille, the old-school steakhouse located on the fringe of downtown Akron, OH. There are four people seated in the booth, only one of whom is 16 years old, 6 feet, 7 inches tall, and dressed like he just stepped off a basketball court. That would be LeBron James, and yes, he is the one.

Seems the guys in the kitchen recognized Akron’s most famous young resident when he came in, and they’re hoping for a signature. LeBron obliges, inking a couple of napkins for the cooks. Curious, I ask if requests like this—guys twice his age asking for autographs—have ever messed with his head. “It did,” he says. “But I’m used to it now. I got it down pat.”

Maybe so, but he hasn’t perfected the skill just yet: A peek at the napkins shows two signatures so diverse, you’d hardly believe they were written by the same hand. I call him on it, pointing out that, if I didn’t know better, I’d assume one of the autographs was a fake.

“I know. That’s good,” he says, drawing laughs from around the table. “That’s so somebody can’t forge it. They’ll do one of them, and then they’ll go, ‘Oh, wait…’ So that’s good.”

LeBron James is 16 years old, and he’s already thinking about protecting himself from autograph fraud. Crazy as it seems, celebrity status is part of his reality. He hasn’t yet begun his junior year, and he just might be the best high school basketball player in America.

For our purposes, the story starts a couple years back, when Dru Joyce brought his man ’Bron down to the gym at the Akron Jewish Community Center. About 5-2 at the time, Joyce was a gym rat who became a regular at these Sunday night skills sessions, held at the JCC and run by a former D1 college coach and full-time stock broker, Keith Dambrot. Li’l Dru brought LeBron, and eventually talked his boys Sian Cotton and Willie McGee into coming down, too. Four junior high kids of varying size and skill, AAU teammates who played for Dru’s and Lee’s pops on the Northeast Ohio Shooting Stars, they had a plan: Wherever they went to high school, they’d all go together. As it happened, Dambrot had recently filled the coaching vacancy at St. Vincent-St. Mary HS, a small Catholic school with a decent hoops rep. Having made an impression on this talented quartet, his timing could not have been better.

“I thought Coach Dambrot was a real good coach,” says Dru, “and that I could learn a lot from him—that all four of us could.”

Dru decided first, the others followed suit, and the self-dubbed “Fab Four” arrived at St. V expected to play a supporting role on an already solid team. Instead, led by LeBron and his cousin, all-state senior Maverick Carter, the Irish went 27-0 and won the state championship. It was a shocking debut, but those who knew LeBron weren’t surprised at all.

“He’s pretty much always been ahead of everybody,” Dru says of LeBron. “I remember in eighth grade, we went down to the AAU Nationals, and he just dominated.”

Li’l Dru’s father—Big Dru to you—remembers those exploits well, having coached the Shooting Stars to three top-10 finishes at the AAU Nationals. “You could always see it,” says Big Dru, a St. V assistant who became head coach after Dambrot took an assistant’s job at the University of Akron last month. “LeBron has those kinds of things every coach wishes they could take credit for, but you just can’t.”

It’s the total package, the prototype baller’s build—tall and thin, with long arms, huge hands, and the potential to grow another inch or two—not to mention the athletic ability, court vision and instincts to go with it. All of which explains why men not usually given to hyperbole can’t help but shower him with praise.

“He’s the best high school player I’ve ever seen,” says Akron Beacon Journal columnist Terry Pluto. “I’m very guarded about saying that, because the last thing he needs is more hype. But I have never seen a better one.”

Last year, Pluto asked Howard Garfinkel about LeBron. As founder of the venerable Five-Star Camp, which LeBron attended last summer, Garfinkel has seen most of the best high schoolers of the past 35 years. Singling out notable Five-Star alumni Elton Brand, Grant Hill and Stephon Marbury, Garfinkel said, “LeBron played as well or better than any of them when they were sophomores at my camp. He totally dominated. I’ve never seen anything like it.”
Then there’s Dambrot. “I view him a little like Magic, in that he can really pass,” says the coach, who, despite the job change, expects to remain close to LeBron. “Then, he’s a little like Kobe, and he’s got some McGrady in him, too.” Asked if he isn’t worried such comparisons might warp LeBron’s ego, Dambrot replies. “It doesn’t bother me, because I think he’s one of the top five players in the country. I know I have my personal biases, but this guy…this guy is so talented. He’s just a great player. Most guys who dominate at his age do it athletically. LeBron has done it with skills and knowledge. There’s nothing he can’t do if he wants to do it.”

Proof? Last season, with his ’cuz graduated and his rep starting to spread, LeBron blew all the way up. He averaged 25 points, 7 boards and 6 assists, but more impressive, he led the Irish to a 26-1 record and another state title, winning Ohio’s Mr. Basketball award along the way. But in a season full of highlights, the brightest might have been this: Oak Hill 79, St. V 78.

It was mid-January, and Oak Hill took the nation’s No. 1 ranking into the game. LeBron responded with 33 points, and if he hadn’t missed a pair of late free throws and a 20-footer at the buzzer, the Irish might’ve been No. 1 at the end of the year. Afterward, Oak Hill’s Kentucky-bound swingman, Rashaad Carruth, called ’Bron “the best I’ve ever played against.”
“The way I played that game, it just felt like can’t nobody stop me,” LeBron says. “I felt like I got better every game after that.”
If he continues such improvement, the consensus is clear: Kid’s not going to college. The good news for UNC, Michigan State, Ohio State, Cincinnati and Cal? You’re on his short list. Bad news? The L is on that list, too, right at the top.

Back at the Diamond Grille. Disappointed that the word “hamburger” doesn’t appear on the menu, LeBron orders fried shrimp. He’s a picky eater, and he doesn’t talk much, at least not around relative strangers or SLAM writers he just met. But he’s cool: smart, laid-back, and quick with a joke—a fairly average 16-year-old kid, his height and earning potential excepted.

As for worries of a blown-up head, know that LeBron is neither overly impressed with himself nor blind to his Big Dog status. After a ragged pickup session at the St. V gym earlier in the day, LeBron sits alone at the top of the bleachers. The state title rings have just arrived via FedEx, and they sit in a box a few rows below. When a teammate reaches into the parcel, LeBron shouts down sternly, “Put it back.”

“Why are you worried about my business?” comes the gruff reply. “This ain’t your team.”

It’s a joke, mostly, and Dambrot says any signs of ego or jealousy are nothing more. “If your best player’s not a hard worker or doesn’t share the ball, it creates issues,” he says. “But LeBron doesn’t have a selfish bone in his body.”

Li’l Dru confirms it: “He’s always been pretty level-headed, and he cares for his friends.”

Blame his mom for that. Gloria James seems to like being the mother of the most popular kid in town—not in a banner-waving, Ann Iverson sort of way, but in the sense that she clearly enjoys hanging with the kids and being involved. Friendly and youthful, she comes off as much LeBron’s best friend as his parent.

At dinner, Gloria sits with Eddie Jackson, a long-time friend she unfailingly calls “LeBron’s dad.” Though not ’Bron’s biological, Eddie is a presence and a provider, and along with a small group of friends and fam—Dambrot and the St. V coaches, area youth coach Frank Walker, and Gloria’s brothers Terry and Curt James—has filled the roles of father, big brother and advisor. It’s not your typical nuclear family, but it works.

Gloria and Eddie chime in only once during the dinnertime Q&A. When I ask if they’re ready for the influx of shady characters and hangers-on sure to appear as LeBron’s fame grows, Gloria is blunt: “If they haven’t been down from Day One, they can’t get on the bandwagon now.”
“Gotta be like that,” Eddie adds with a nod.

“But knowing everybody we deal with,” Gloria says, “I don’t think we have to worry too much.”

By all appearances, she’s right. Surrounded by people who truly seem to be looking out for him, and owning a game that’s prepackaged for NBA use, LeBron shouldn’t have to worry about much. If he can keep his head straight and his game tight, his future looks even brighter than his present. With that in mind, I gotta ask: “Say it’s next summer, after your junior year of high school, and people are saying you’ll be a Lottery pick if you come out now. What would you do?”

“It all depends,” he says. “I need to get a lot more information. If it happens, it happens.”

Just to make sure he understands: “You know I said after your junior year, right? I mean, can you imagine leaving high school early?”

Then he flashes his wit, and even Gloria has to laugh. “I wish I could finish high school right now, tell you the truth,” he says.

LeBron James is 16 years old, just a kid who can’t wait to get out of high school and get on with his life. To which we say: Patience, man. The future will be here soon enough. In the meantime, just keep working—in school, on your game, and definitely on your signature.