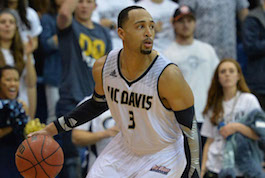 Corey Hawkins has a habit of scoring in ways that cause his head coach, when watching film later, to rewind, then rewind again, shaking his head in disbelief as he asks himself, How did he do that?

Perhaps it’s partly due to genes. Corey is the son of Hersey, an offensive savant who averaged a DI-best 36.3 points as a senior at Bradley. He was the sixth overall pick in the ’88 NBA draft, and enjoyed a 13-year career in the league.

So the younger Hawkins always had access to gyms, and he’d head there to hoist jumpers. Lots of ’em. Losing himself in the sound of composite leather tickling twine. The beat of the dribble on hardwood. Siren call for so many.

As a senior at Estrella Foothills (Ariz.) High, Hawkins averaged over 36 points per game. He set single-season and all-time scoring records for the state. Since he hadn’t immersed himself in the AAU grind, it wasn’t until he began breaking history that attention circled. How does it feel to be the state’s scoring leader?

Hawkins took it in stride. He’s long understood the bigger picture. Stats are important only when placed in the context of a team’s success. (His Estrella Foothills teams won a lot.)

He’d committed early to Arizona State, but as a freshman in Tempe, Hawkins averaged just 8.4 minutes in 24 games. “I felt I had a lot of talent that wasn’t showcased,” Hawkins says. “I’ve always had the utmost confidence that I could compete with anybo`dy.” So, that spring of ’11, he decided to transfer.

Enter Jim Les, who had been a teammate of Hersey Hawkins at Bradley. Though he’d had just one DI scholarship offer out of high school, Les finished his career with 884 assists, a tally that currently ranks 17th all-time in DI. He played seven seasons in the NBA, including one in which he led the league in three-point field goal percentage.

After nine years coaching his alma mater, a string that included a run to the Sweet 16 in ’06, Les took the UC Davis job in May, ’11. He soon learned from his old friend Hersey that Corey was transferring. Here was a kid with the talent to play anywhere in America, but Les knew that Hawkins’s year at ASU had shaped him. He was looking first and foremost for a place where he would be comfortable. He needed trust, a framework he could fit into.

When Les spoke on the phone with Hawkins, he kept his message succinct. The Aggies had won the ’98 DII national championship, but they did not have a pedigree at the DI level. They didn’t have the facilities Hawkins had enjoyed in his year in Tempe. But Les had a vision and a background of succeeding at the highest levels of basketball. He had the utmost confidence that he could build a winner here.

Hawkins visited Davis, and loved the town’s tight-knit feel. Tyler Les, Jim’s son, was on the Aggies roster. Hawkins knew the family well, and he’d once run riot with Tyler at basketball camps conducted by their dads. “There’s a level of respect established anytime you can go where you’re coached by a guy you feel comfortable with. I knew he’d have my best interests in hand,” says Hawkins, who soon signed on.

Here, he could help bring a program to prominence. He’d have the chance to showcase his skill set. Our staff will challenge you. We’ll have your back. We’ll help you get better. We’re gonna work our way up, Les told him.

“Sometimes kids can get focused on the numbers and stats, that they have to average this or shoot that,” says Les. “They lose sight of everything that leads up to those numbers, the fundamentals and practice, committing yourself to what’s best for the team. Corey puts up gaudy numbers, but his chief concern is, How can I help my team win. He does that every day in practice.”

At UC Davis, Hawkins has been a revelation, showcasing one of the nation’s most well-versed offensive arsenals. There’s that shot as a sophomore against UC Irvine. Worth a YouTube search. Driving to his right from the top of the key, drawing contact near the low block, flipping a 10-foot shot over his right shoulder. Buckets.

How the hell did he do that?

This season, he’s averaging 20.8 points, hitting 51% of his shots. He takes 5.6 free throws per game, and hits them at an 80% clip. It’s a style that happens to mirror a former Arizona State star, one who also directs traffic for his team. “It’s the James Harden approach,” says Hawkins. “He’ll get 30 points, but he gets it by going eight of 12 from the floor, and getting the rest from the line. He knows when defenses shift on him, he can involve his teammates. I pride myself on being a good passer, too.”

“I’m amazed at how efficient he is,” says Les. “He doesn’t take many bad shots, and that’s a product of his upbringing. He averaged 36 points as a senior in high school, but he was the most unassuming, least-cocky, least ‘it’s-all-about-me’ type guy. If you have that approach going in, you can put up those types of numbers.”

Despite a recent loss at Hawai’i, UC Davis is off to a 14-4 start, their best-ever at the DI level. “We progress on a steady diet,” says Hawkins, referring to Les’s subscription for growth: strong practices, conducted at game pace. Cohesiveness. “We had the pieces; this year has been about bringing it together.”

In addition to the point production, which leads the Big West conference, Hawkins is averaging 5.4 boards, 3.7 assists and 1.4 steals. Last season, he led Davis in points, assists and steals. Says Les, “Obviously, he came into college with the aura of a great scorer, but he worked really hard to become a complete player. Our staff continues to challenge him, and he’s stuffing the stat sheet now. He’s a better defender and rebounder, he gets assists. And when your best player’s in the weight room, conditioning the way he does, it makes your team better.”

“I’ve always been able to shoot, so I don’t know why I had a label as a driver in my first years here,” says Hawkins.

On Jan. 10, the Aggies took down Long Beach State 73-67 in an OT thriller. Hawkins, fending off a tender hamstring, finished with 28 points and 10 rebounds. The Pavilion, as their home gym is known, was packed and rocking. It was a crystallization of Les’s vision four years ago.

Two years ago, the Aggies had come within a last-second shot of beating the 49ers at home. Invoking total recall, blessing and curse of every coach, Les vividly remembers that encounter, and the frustration he’d felt with the final result. But as he traveled home after this season’s win over the Beach, he had a revelation. This team needed that loss two years ago. It helped us grow.

“There are some setbacks you have to have,” says Les. “Last season, we dealt with injuries. Corey was a marked guy, dealing with double- and triple-teams every night. It helped him grow as a player, and we continued to grow as a team. Good programs with character will survive and prosper.”

This season, Davis is doing it at a school-record rate.