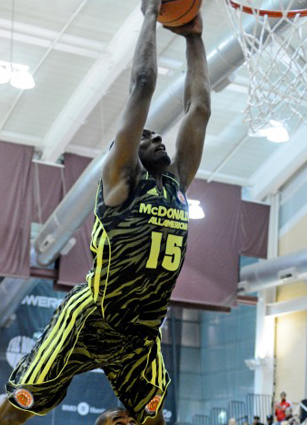 What’s good? Y’all know SLAM is in the building for the 35th annual McDonald’s All-American game in Chicago. We’re kicking the live blog off for the boy’s game so be sure to chime in and comment. I’ma hold it down even though it’s a struggle for me right now. Dropped my laptop and broke the ‘F’ and the ‘V’ buttons. All good, tho. 2 buttons don’t stop no show!! In a minute…

– We’re back!! The boys squads being introduced to the Bulls intro music right now.

– Music just switched to ‘Lose Yourself’.’ Seems appropriate… This is a huge moment for these kids. One they won’t forget. Enjoy it!

– Not quite last year’s turnout in terms of fans, but there’s still a lot of people here tonight.

– We’re less than 4 minutes from tip-off, ‘Rack City’ blaring through the UC.

– T-shirt give aways always gets the party crackin’! Gets me crackin’ too when people are falling over each other to grab  ’em.

– Poythress, you can’t do that. Travelling…

– Grant Jerrett is nice down low.

– Shabazz with the jam!

– Poythress with the nice lob finish.

– Another jam for Poythress

– Tyler Lewis is a trooper. Got his tooth knocked out in practice but he wasn’t missing this game for anything!

– Yogi Ferrell in the game. Hoosier fans got a good one.

– Perry Ellis almost brought the house down with that inbounds play.

– Archie Goodwin with the nice tip-in

– Tony Parker with the nice jam off the dish from Anderson. TO, West up 23-17

– Shout out to adidas for going hard with the neon uni’s this year.

– TV timeouts are EXTRA long, yo. You don’t notice it because, you know,  you’re watching on TV

– Poythress for 3. Coach Cal got another one!

– Anthony Bennett with a nice jam

– That dude, again… Shabazz Muhammad with the nice tip jam

– Former McDonald’s greats being shown on the big board. Bron got booed. Of course they show DRose and the UC goes crazy

– DRose got a louder ovation than when they showed Michael Jordan

– Alonzo Mourning in the building

– He wants be called William, tho…

– He made up for it two times in a row tho. Back to back jams pust the West up 8

– Shabazz Muhammad going to work. 13 in the game on 6-9 from the field

– Amile Jefferson got a little Lamar Odom to him. A little…

– Nice touch pass to Shaq Goodwin for the East dunk

– Perry Ellis with another jam for the East

– Sulaimon 3 on one end, Purvis dunk on the other

– Poythress is a beast. Nice jam down low

– Amile Jefferson with the Kevin McHale up and under move

– Oh, shout out to Devonta Pollard who had to sit this game out with a concussion suffered in practice. And yeah, Shabazz is still cookin

– Muhammad would’ve brought the house down with that windmill

– Marcus Smart struggling in this game. 1 point so far

– Yogi gets great elevation on his shot

– Archie Goodwin has a really nice game. Kentucky fans should be excited

– Nice pass off the glass from Kyle Anderson to Rodney Purvis. East still down 16 with 7:15 to go in the game

– Kyle Anderson blows the dunk that could’ve cut the lead to 8. Things got a little sloppy after that for both teams

– Nice drive by Yogi to gt to the line. Misses the 1st FT tho…

– Another dunk by Shabazz Muhammd puts the East up 7, but Rodney Purvis with the And 1

– 52.6 seconds left. Anything can happen but I’d say the West has this one locked up. Ferrell fouled with 43.5 left to play

– Great look by Anderson to Dunn to cut the lead to 4, but the West comes right back and scores

– Anderson with the Dunk, East still down 4 with 4.1 seconds left and fans are filing out of the United Center

– That’s it from Chicago, folks. The West wins by a final score of 106-102. It’s been real. See you next year… You know SLAM and SLAMonline will be there holding you down as always! 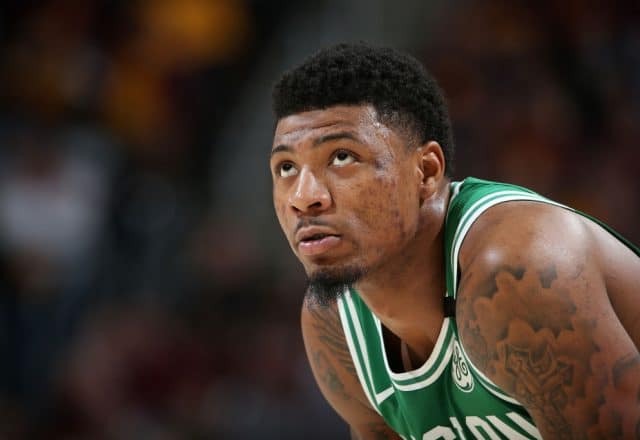 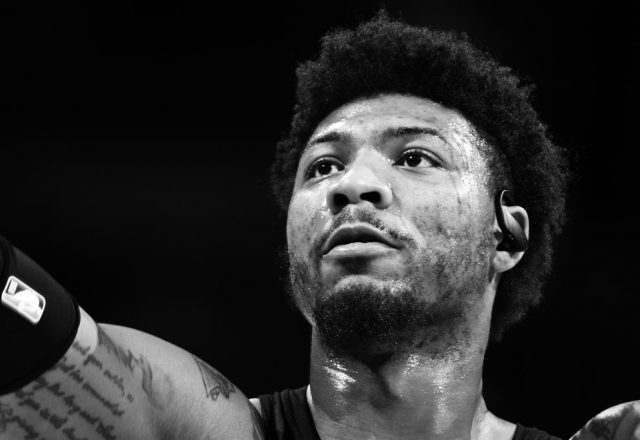