Live from the Kobe Skills Academy 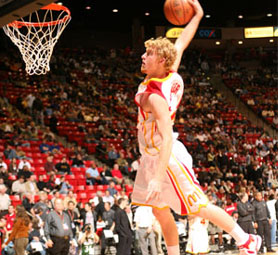 Santa Ana, CA—The shock, sadness, bewilderment and flat out misery is still well and warm within the hearts of Lakers fans. As far as they’re concerned, the earth spun off its axis on the day Kobe Bryant told the world he wanted to be traded from the Lake Show.

Yet there is a glimmer of hope within them, as they anxiously await the next report from Ric Bucher and the other alleged “insiders” at ESPN, that Kobe will stay. They frantically call the sports radio talk shows and suggest trades that could keep Kobe happy. Garnett, O’Neal, Bibby, Chauncey—everyone’s name has been mentioned. Andrew Bynum and Lamar Odom’s respective games are chopped up daily. In the midst of all this hysteria, Bryant and Nike held the first ever Kobe Bryant skills academy here in Orange County this week—a development camp that featured some of the top high school and college “two guards” in the country. This camp as well as several others, represents Nike’s remix of the summer camp circuit. Rather than holding one big summer outing with the top players in the country, Nike is doing several camps held by position with others featuring Amare Stoudemire, Steve Nash and Vince Carter.

The three day camp started last Monday and was held at the lovely new gym at Mater Dei High School with the focus on individual skill development. There were many on-court instructors as well as speakers such as Joe Bryant. The college players and high schoolers were separated with each group having to go through two-a-days.

I showed up on day three for the final college workout and had already been briefed that Kobe wouldn’t be in attendance. He apparently had been there on the previous days to survey the action—I’m presuming it was during times that the few media guys who were there didn’t have access. And understandably so, surely Kobe doesn’t want to answer any questions while his career hangs in the balance. All I wanted was the chance to ask him about the look on Dr. Jerry Buss’ face in Spain when Kobe looked him in the eye and presumably borrowed a line from Shaq saying, “I’m out.” Anyway, the word I got back was that Kobe likes to hang back and watch his instructors go to work and then pull a player to the side and offer some words.

As I walked in, the college players softly strolled off the bus and into the gym—the workouts here have not been easy as evidenced by the limps and grimaces. After some intense stretching, the players broke into groups to work on moves in the high post. One of the guys who stood out immediately was Arizona sophomore-to-be Chase Budinger and not because his trademark red locks have become bleach blonde, thanks to many days on the beaches of SoCal. The reigning Pac-10 Freshman of the year has a very attractive package: 6-8, can shoot threes, good handle, great passer and he competes. Some observers still say he’s got that “laid back beach attitude”, a reference to his days as a volleyball star, but the majority of that has to be centered on the fact that things just seem to come easily to him. Another guy who stood out from the pack was Davidson’s Stephen Curry. Despite being the shortest collegian in attendance, Curry was making it rain from various spots on the hardwood. It’s no shock that his father is former NBA marksman, Dell Curry, a career 40 percent three-point shooter in 16 NBA seasons. Curry also gave a good defensive effort and was somehow active under the boards.

Following the drills, the players participated in a full court scrimmage that allowed no dribbling. This was extremely interesting. It was a true test of stamina and on court positioning. The player who was going to end up with the best shot was the one who did it via movement, not handle. It was a phenomenal drill that should be used by all teams.

The top matchup to watch came from the two top NBA prospects here, Budinger and Henderson. Both guys went at each other hard, but clean. Each displayed a good amount of skills but clearly Budinger is the better shooter while Henderson is stronger and more physical. Henderson is absolutely shredded—his body fat looks like it’s in the 5 percent range. Because of the lack of point guards, Budinger played more of a distributor role on his team and was impressive, also finding ways to score. Curry continued to shine during the scrimmages as did Nevada’s Marcelus Kemp. Kemp was granted a medical redshirt and will thus be entering his 6th college season this year. His game is a bit unorthodox, but he finds ways to score and is aggressive on the defensive end. He wasn’t as athletic as most of the guys here but he makes up for it with hustle. Kemp averaged 18.5 points per game last season and hopes what he’s learned here can help Nevada make another NCAA run. “When I first got the call about this camp, I was really excited because Kobe is my favorite player,” Kemp said. “It’s been a great camp. I’m going to see a lot of double teams next year, so I’ve been working on kicking it out more. I also have learned some new moves and improved my shooting with new techniques.”

Kemp was also impressed with Bryant, who sought him out directly during one of the sessions. “He was here more than I thought he would be,” Kemp said. “The first day he spoke to us as a group and talked about leadership and work ethic. The next day, I guess he was watching me play and he pulled me aside and showed me some new moves I could use that would help me score a little easier. I was star struck. You have to understand, that has been my favorite player for a while.”

I also got a chance to sit down with Henderson and Ellington, two old friends who played high school ball together and are now warriors within the Duke v. North Carolina civil war. It was nice to see that they’re still close—when I asked Henderson how the camp went, I witnessed this exchange.

He stopped after hearing Ellington snicker at his response.

Henderson (now completely focused on Ellilngton): What, I can’t say that? Man. Why you trying to get into the interview? If he wanted to interview you, he would have sat next to you and interviewed you!

When I asked Ellington if he still gets to hang out with his old friend in the offseason, he gave a serious look and said, “I don’t mess with him, man.” More laughs.

I didn’t get a chance to get back to Mater Dei for the night session which featured the high schoolers. However, word on the street was that Pennsylvania’s Tyreke Evans was the best player of the bunch and that little Rotnei Clarke of Oklahoma was “getting buckets” on people.