Live from the Stephen Curry invitational 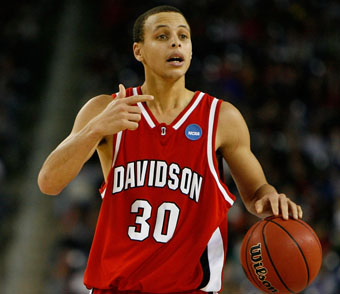 Sitting alone in front of his locker, hunched over with the devastating sag of a player who just fell a basket short of reaching college basketball’s Promised Land, Stephen Curry rifles through his duffle and pulls out a bag of Thomas’ plain bagels. He fingers the one remaining bagel over the packaging, decides he’s not going to bother, twists the long neck of the plastic bag and flings it towards the garbage. It hits against the wall perpendicular to the garbage at an impossible angle and somehow drops into the bucket.

It’s been that kind of tournament for Curry.

The Davidson College sophomore is now a household name, a player who took a pretty good squad of guys on his back and showed them greatness. His tournament-defining performance will be mentioned for years to come, but lost in the commotion of his budding legacy is how he injected a double dose of excitement into an otherwise lackluster tournament that saw all four number-one seeds barrel into the Final Four.

“I had a lot of fun out there,” Curry says, allowing a swarm of reporters to infiltrate his solitude. “I mean it hurts to lose, but it’s a great time for me.”

Curry, the Midwest Regional’s Most Outstanding Player, delighted Detroit’s Ford Field crowd with a remarkable performance in leading upstart Davidson over Wisconsin 73-56 in Friday night’s Sweet 16 matchup. He poured in 33 points – outscoring Wisconsin 22-20 in the second half – leaving himself little room to impress for a follow-up act in the Elite Eight. But with his quick release and uncanny ability to shake himself free, Curry has shown time and again that he only needs a little room to operate.

After Kansas handedly defeated Villanova 72-57 in the second game on Friday night behind a balanced guard attack and solid perimeter defense, Davidson knew it would get its chance to topple Goliath.

“They don’t intimidate us, even though we know what a great team they are,” senior guard Jason Richards, the nation’s assist leader, said before the game. “It’s going to be a tough, physical game, but I don’t think they intimidate us.”

The fearless Curry came out slinging.

After missing his first five shots over the opening ten minutes, Curry adjusted and came into his own. He scored his first points of the game on a three-pointer that broke the NCAA’s single-season mark. He knocked down four out of his next six shots to close the half on an array of layups and jumpers.

Trotting off the court at halftime, Kansas looked stunned that Curry and Davidson were at it again. A team that was expected to lose a week ago – twice – was trailing one of the top four teams in the country 30-28.

Curry opened the second half with five quick points, displaying an off-the-charts scorer’s IQ that epitomizes his genius. On his first bucket, Curry rose above the outstretched arms of two defenders, using the smallest margin of open space and not even looking at the basket until he reached the peak of his jump, drilling a long two. On Davidson’s next possession, he worked off several screens and quickly shot a three-pointer the instant he had some breathing room, snapping his wrist with an exaggerated follow-through that guided the ball into the nylon.

Running out of options and trailing by three, Kansas stuck the six-foot-six Brandon Rush on Curry, who was held scoreless over the following ten minutes.

“I think Rush with his length and his height was a lot more effective [than the other three players that guarded me],” Curry says after the game. “He can stretch his arm out and affect your shot.”

At one point, trying to brush off a screen, Curry bumped into his own man and complained to the ref that Rush caused the contact. The two stars exchanged words, allowing themselves to smile.

“He ran into his own player and he thought he got fouled, and I was like, ‘Man, nobody touched you,’” Rush says from the victors’ locker room. “And we started laughing together.”

With both teams slowing down the pace and working hard late into the shot-clock, Kansas found itself up by two with 17 seconds to play. Davidson called a timeout.

A day earlier, Curry spoke about a childhood fantasy of his that was quickly becoming a reality.

“As a kid you are always out in the backyard throwing up buzzer-beaters to give your team a chance to go to the Final Four or win the National Championship,” Curry said during Saturday’s media session. “And it doesn’t really hit you until you have the actual opportunity to be on that stage.”

Given the stage, Curry and Richards decided to shine the spotlight on the star shooting guard.

“[Richards and I] were throwing ideas out,” Curry says about the discussion during that final timeout. “We came up with a solid gameplan to attack the final 17 seconds.”

Sitting next to Curry, reserve guard Bryant Barr adds: “When they’re talking, the rest of the team is listening.”

The Wildcats’ leaders decided to go with a play called “Flat,” which essentially calls for senior forward Thomas Sander to set a flat ball-screen at the top of the key to free up Curry. Kansas knew what to expect.

“They had four guards there,” says Curry, “which defeated the purpose of the play.”

After two unsuccessful screens, Curry had the ball deep behind the three-point line, where he juked Rush into the air. Curry later admitted that he couldn’t get his shot off at that point because he was off-balance.

Double-teamed, he swung the ball to an open Richards who launched a three from several feet behind the top of the key.

“When he got rid of it I was pretty happy,” Kansas coach Bill Self tells reporters after the game.

“I was open at the top of the key,” Richards says. “It’s not the greatest feeling ever.”

While Kansas celebrated, many wondered what could have been if Curry had taken the final shot. It seemed like a harsh injustice to one of the greatest individual performances in NCAA history. This was Michael Jordan passing the ball off to Scottie Pippen against the Utah Jazz in the 1998 NBA Finals; Mariano Rivera signaling to Joe Torre to replace him with Kyle Farnsworth with two outs in the ninth; Zack Morris telling A.C. Slater to marry Kelly Kapowski in the “Saved by the Bell” made-for-TV movie.

The Jayhawks have already begun to look forward to their semi-final showdown with North Carolina, but the team knows that it overcame the tournament’s toughest hurdle.

“I don’t know if we’ve ever faced a hotter player [than Curry],” Self says after the game, citing Kevin Durant and Michael Beasley as the only better players he has ever coached against. “He’s remarkable.”

Curry and Davidson gave us a tournament to remember, exceeding the nation’s expectations by hanging with the top teams in the country. While the small school from North Carolina will miss Richards’ playmaking abilities next season, the Southern Conference champs have as good of a shot as any to make it back to Ford Field, the site of the 2009 Final Four. Curry confirmed that, no matter what NBA scouts tell him, he will definitely return to Davidson next season.

While David may not have taken down Goliath this time around, next year he will have to deal with becoming the giant.

Aaron Kaplowitz is a freelance sports reporter. He’s heading to San Antonio this week to cover his second NCAA Final Four. Check out some of his recent articles. http://aaronkaplowitz.wordpress.com/