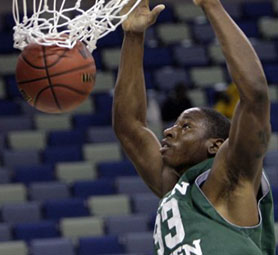 My bracket hasn’t completely exploded yet (but Xavier and Duke — yes, I picked Duke — sure as hell tried to press the big red button), but all of the bombs are planted in Day 2. It all starts with this UNLV-GT game and ends with the Nevada-Creighton Game of the Century. This is a thread to collectively talk each other off the ledge.

– Just got through finished reading Khalid’s thoughts on why it’s a faux pas to like Duke and that the Blue Devils are human too, so we shouldn’t be all over them as much as we are as a society. It’s so well-written that it’s hard to retort, so read it, but don’t worry rest-of-America, I’m working on the counter-point as we speak.

– OK, CBS — so you say North Texas is outplaying Memphis in what would be the biggest upset in three or four years. Oh, we’re not switching over to it? Okay, cool, just have to watch this UNLV-GT game with no one to root for.

Update: – UNLV is very slowly, very painstakingly pulling away. Is there any team/player in all of sports whose nickname is now more ironic than the UNLV Runnin’ Rebels? It makes Utah Jazz (no music allowed, non-white people discouraged) sound ultra-fitting.

– No idea UNLV guard Curtis Terry was related to Jason Terry (they’re brothers), but should’ve been able to tell it from the 500 pairs of socks he’s wearing. That makes Curtis Terry the cousin of Martell Webster as well. This is the antithesis of the Baldwin gene pool.

Update: – I was reading this Sporting News story this morning, which essentially says that Albany is the team that takes teams to the limit in the tournament but won’t get respect until they, you know, do something in it. Well, uh, better luck next year guys. Virginia leads 45-25 at the half.

We needed another Old Dominion anyway.
– While we have this painstakingly slow UNLV-GT game on, (oh, even higher irony. The Terrapins, a turtle, played the most uptempo game of the tournament so far yesterday), I should probably let you know that I’m blacklisting Marquette from future tournament picks. Sweet 16? Seriously? Dominic James is a basketball siren.
– HALLELUJAH! We have a switch to the Mean Green leading Memphis. This is one of those games that could infinitely mess up my bracket, but I’m still rooting for it. It’ll mess up everyone‘s bracket, anyway.

Update: – Well that escalated quickly: 37-28 Memphis at the half. But still keep an eye on this. In the Georgetown-Belmont game yesterday, as with every year when this happens, the underdog hit its first few shots and effectively took out the favorite’s best player (Roy Hibbert) with schemes that could be fixed after a couple of timeouts. After Belmont lost confidence with their jumper, couldn’t get to the rim and Hibbert realized that when he is tripled, two other players are open, the game was over. This is different: North Texas is legitimately hanging in there playing man defense and driving to the hoop.

It isn’t over. Like, say, Albany-Virginia is. I have the pleasure of watching this for the next ten minutes. Hey, is Divorce Court on?

Update: – The worst part of this Albany game is that, had Vermont won that conference tournament, we’d at least have a game on our hands. Now Virginia gets the chance to make it look like they deserved that 4-seed (they didn’t), they are an actual threat to win the Championship (they’re not) and their game against Tennessee/LBSU next round won’t be the worst second round game that I could possibly dream up (it will be).

Update: – If Georgia Tech ends up losing this game, I’m going to be a little upset (yes, that word still exists outside of basketball context this month). They’re starting to get their footing in the post, even with Thaddeus Young severely out of whack. Guards win it in the tournament, I know I know I know, but if you have three guys who are 6’10” that can produce at this high of a level, they could be the only low-seed who can beat the Hibberts, Grays and Odens solely by neutralizing them.
– Albany pronounced dead. Estimated time of death: 2:16 p.m., or opening tip (evidence inconclusive).
– Kevin Kruger, who has the old, imaginary fifth year of eligibility, is trying to take over this game but Wink Adams is taking over with some the defensive play of the game. Forced a five-second dribbling violation up top, which refs apparently still call at the end of the game. UNLV’s big men Essengue and White just look like they care more than all of G-Tech combined.

Update: – UNLV 67, Georgia Tech 61. Score one for mid-majors and trying in general. UNLV got every rebound on both ends in the end and Georgia Tech’s only hustle player, Amidu, had four fouls in crunch time. UNLV gets the treat of playing Wisconsin in the next round, or as HOVA thinks below, Texas A&M-Corpus Christi. Good luck, big guy. I can’t root for a school that sounds like a chip.

– While we wait for the start of LBSU-Tennessee, here’s something that I’ve yet to hear or read anywhere. Twenty-six of LBSU’s 34 games were played in the state of California. Of their seven out of state games, they lost three to non-tourney teams. Two are embarrassing: Temple and Hawaii.

Update: – The difference between a mid-major and a major is not the size of the school. It’s not how long the team has had a basketball program, it’s not about the conference and it’s barely about the prestige surrounding the school anymore.

It’s all about confidence.

And Winthrop looks so confident. Right now, they could carry the world on their back into the second half and still win this thing. And they might just do that.

Because good teams with shooting woes in the first half don’t go away from their gameplan. They don’t necessarily shoot through it, either. They wait for their good looks to come, take them when they come and play good defense in the meantime. Those shots, they know, will eventually start falling.

After a full half of basketball spent shutting down a Notre Dame team and forcing the Irish into Winthrop’s tempo, those shots, they knew, would eventually come back.

So, as for those back-to-back dagger threes from Michael Jenkins and Taj McCullough to end the half, this means more than a four-point lead. This is confidence. And these Eagles, this year, are a major.

– This is important for Texas A&M Corpus-Christi: KEEP SHOOTING THREES. That looks like a joke, with all announcers (and I) say about going to the basket, but that’s how you keep that early 10-0 lead manageable. It keeps the tempo up because both teams have to chase long rebounds and negates the fact that you won’t be able to stop anyone in that starting lineup in a half-court game in the second half. Ride the hot hand until it burns you.

– Corpus-Christi, by the way, is currently making toilet paper out of my bracket, 17-4. H to the Izzo, I hope you talked to Pete Rose yesterday about some wagers.

Update: – Check out how ugly the TAM-CC newspaper website is. Worse yet, check out the lead to the latest news article on the hoops team:

On Saturday, March 3, Texas A&M University—Corpus Christi Islanders scored 85–68 against Sam Houston State Bearkats in Huntsville, gaining the Southland Conference (SLC) title. They are now headed off to the National Invitational Tournament in the Campbell Center in Houston.

Unreadable and factually inaccurate! Does that mean they scored 85, but just 68 against Sam Houston State? Where did the other 17 go? Did they play pickup hoop against the janitors? At least their basketball team seems to be better. 23-7, Wisconsin is 3-22 from the field (13.6%).

– Is Wisconsin really losing because they can’t beat a press? What is this? Girls high school basketball?

Anyways, ultimate Wisconsin irony from the other day. ESPN was with the team when they were watching the selection show on Sunday night and when they called “Texas A&M,” some players didn’t process “Corpus-Christi” afterwards. They then interviewed Alando Tucker, who sighed. “Phew!”

Yeah, “phew!” Maybe if you played the other Texas A&M, you’d actually have to show up.

Update: – Anyone having trouble watching with buffering on sportsline.com or watching the non-TV games, try here.

Update: – Really diggin’ the Horace Grant goggles on Marcus Landry of Wisconsin. This game is going to have the best finish of the tournament if TAM-CC can stick in there.

– More on Winthrop in a second. I’m going to go outside, stare at all the snow and cry like an infant. You don’t get a foot of snow on March 16th. It just doesn’t happen that way.

Update: – I’d tell you a ton about this Nevada-Creighton game, but we haven’t seen much about it. But it looks like it has pretty much played out by the book: Fazekas and minimal supporting cast vs. Nate Funk and a much better team full of shooters and it’s probably the best game in the first round. And, unsurprisingly, we’ve got overtime. Why isn’t anyone making the Fazekas-Rik Smits comparison? Smits was taller and slower, but we internet scouts love same-race comparisons because it makes everything much easier (like how a couple of sites had Anderson Varejao as Joakim Noah’s NBA Comparison because they both had goofy-looking hair).

– We could be looking at a dual Corpus-Christi-Wisconsin/Nevada-Creighton finish. Someone give CBS its schizophrenia medication, Greg Gumbel might finally crack.

Update: – Nevada without Fazekas is better, obviously. Just how the Cavs are 9-2 without Lebron. 77-71, Nevada over Creighton in overtime with Fazekas out two minutes of the extra frame. Somebody get this guy off the team.

– Texas A&M Corpus-Christi’s very short, somewhat realistic dream is over. I think they looked up on the scoreboard and saw that Miami of Ohio lead 9-0, too, and realized immediately that this was a fluke, their season was futile and that the existence of life, as a concept, is useless and that we all die in the end.

Thanks for getting all heavy on us, Island Tides.