In the midst of a dark patch for the storied North Carolina basketball program, Marcus Paige has been a bright spot. 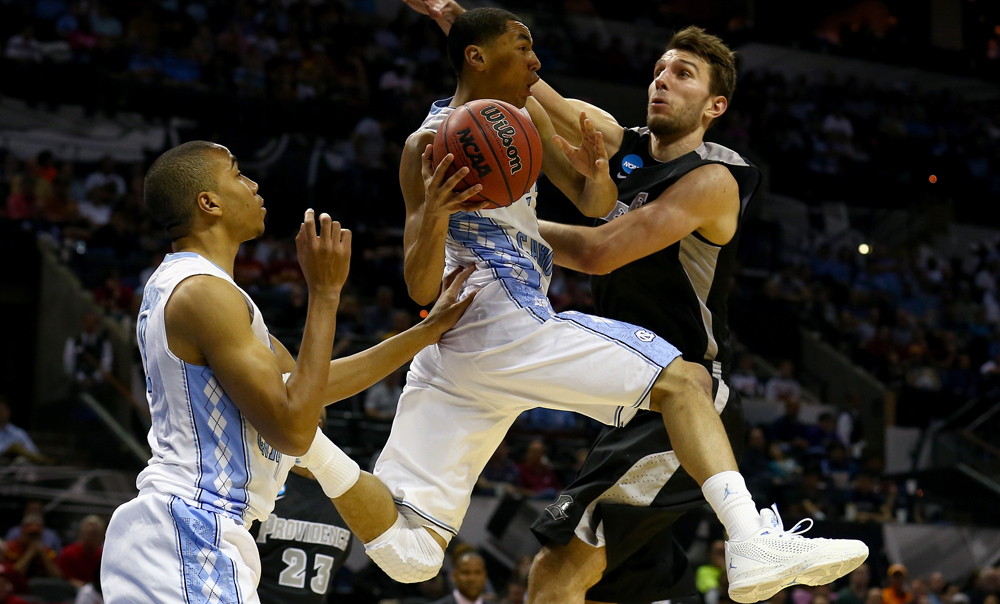 When Marcus Paige was growing up, it was all about Carolina blue. He rocked Jordans, called Vince Carter his favorite player and celebrated when the 2005 team won it all.

“That’s who I would cheer for,” Paige says. “When I figured out Vince Carter went there, I became a huge fan.”

Marcus Paige is from Marion, IA. Of course, having fans spread far from Chapel Hill isn’t out of the ordinary for the Tar Heels. With five National Titles, 18 Final Four appearances and the greatest basketball player ever as an alum, North Carolina’s appeal spreads long past Tobacco Road.

But recently, the program hit a slump. Its current Final Four drought (five seasons) is the longest since the team went from ’82-’91 without an appearance. Furthermore, UNC hasn’t been to the Sweet 16 since 2012, which doesn’t sound like a long time but is the second longest drought for the school since ’80.

“Back in 2012 when we were the No. 1 team in the country, it was probably the last time people felt we had a legitimate shot at contending,” Paige says. “That was a couple of years ago and at North Carolina, it’s expected every year.”

And then, of course, in October a report commissioned by the University of North Carolina revealed that school academic advisers pushed athletes into sham classes from 1993-2011.

When you add all of that up, the 2014-15 season is one of the most important in recent memory for the Tar Heels. “Having a big year for us will help the university in a lot of ways,” Paige says. “With everything that’s happened the last couple of years, it’s important for us to get out on the court and be successful.”

The key is Paige. Entering his junior season, Paige is coming off a year in which he averaged 17.5 ppg and 4.2 apg. He was voted a pre-season All-American and is considered a contender for National Player of the Year this season.

“He does everything you can ask a guard to do,” says North Carolina coach Roy Williams. “He is an outstanding shooter who makes big shots late in games, he runs our offense, is unselfish and likes to get people the ball in places where they like to score. Big-game situations don’t bother him and he can play tenacious defense for the entire length of the shot clock.”

Paige comes from a basketball family. Both his parents played at small colleges in Iowa and coached high school basketball. His sister, Morgan, played basketball at Wisconsin.

From a very early age, Paige was around hoops and honing his point guard skills. “I remember going to my mom’s practices after school and bouncing the ball,” Paige says. “I wasn’t big enough to shoot, but I watched.”

After playing with older kids in his younger years, Paige took his game to the next level when he hit high school. His junior year, he led Linn-Mar to an undefeated season and state title.

All the while, he was catching the attention of his dream school, which in 2010 had gotten Iowa phenom Harrison Barnes to commit to UNC.

“He has all the intangibles,” Felton says. “He can really shoot it. He can pass. He’s tough. He’s a natural born leader. He’s going to lead this team so many ways—not just with his scoring.”

While he didn’t have a freshman campaign like recent top college PGs Derrick Rose and John Wall, Paige averaged a steady 8.2 points and 4.6 assists in his first season at Chapel Hill. His breakthrough came the next year, when his scoring more than doubled.

“He could be the best point guard in college this year,” Felton says. “I think he can play in the League without a doubt.”

As a sophomore, Paige and Co. were eliminated in the third round of the NCAA Tournament by Iowa State. That tournament eventually concluded with UConn point guard Shabazz Napier carrying his team on his back to a National Title.

When Paige watched Napier take the Huskies to the promised land, he saw the model for what he could accomplish this season.

“I definitely see it because we play similar positions and do similar things,” says Paige, a 6-1 southpaw. “I think this year my team won’t have to rely on me the same way that they did, but in terms of leadership, I can do the same things these guys did to get their teams to that level.”

If you go to Paige’s dorm room, you’ll see reminders of North Carolina’s greatness. There are posters of Carter, Michael Jordan and Sam Perkins hanging from his walls. As Paige enters his junior season, he doesn’t want North Carolina’s basketball success to be just memories on a wall. He wants to put the focus back on the court and re-establish the Tar Heels as a perennial title contender—the kind of program a kid from Iowa would root for growing up nearly a thousand miles away.

“At the end of this season,” says Paige, “hopefully everyone is talking about how we had guys step up and make it a special year despite what was going on off the court leading up to the year, and how we brought back the tradition of North Carolina being a powerhouse.”

David Cassilo is a SLAM contributor and the boys basketball writer at cleveland.com. Follow him on Twitter @dcassilo.