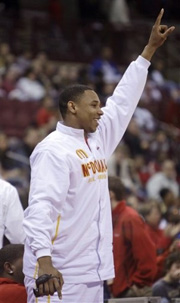 McDonald’s All-American practices jumped off on Monday for us bright and early at 9 a.m. on Monday morning. While most of the players looked mighty fresh and rested, the amount of coffee and laptops with everyone else made you think you were chilling at a local Starbucks.

The day didn’t start off especially well for us either. After rolling downtown to pick up our media credential from the gracious staff for the McDonald’s game, my media pass fell off my lanyard en route to the gym…forcing me to make a full 180 and jettison back to the Renaissance to score another credential, making us miss the first little bit of practice. A monstrous traffic jam later and we were on the Ohio State campus at the RPAC center checking out the top high school ballers in the country.

Practices for both teams were held in the same four court complex with curtains dividing the two squads to they could get their privacy in. While there usually aren’t many plays ran in the McDonald’s game, the coaches from both squads both put in a number of sets for their guys to run if they did opt to run some offenses. While we applaud the efforts of coaches Dru Joyce and Norm Persin for the East, along with Eric Flannery and Kremer for the West, I highly doubt we’ll see too many guys running those sets once the frenetic pace of the game kicks in.

The East squad spent the bulk of their time on the hardwood scrimmaging full court, allowing us to really get a feel for some of the guys who we hadn’t caught since last summer on the AAU circuit. On the other hand, the West team did a bit more skill work and got a number of shots up. We spent the bulk of our time observing the loaded East squad in the scrimmage session, but don’t worry West, we got you tomorrow.

Here’s a look at some of our observations from the practice session:

— The most impressive cat we saw in Monday’s practice had to be Perry Jones. Always considered a bit of an enigma with his superman talent and pedestrian production, the 6-11 forward seems to be putting it all together. The Baylor commit drilled a number of mid-range jumpers off of the bounce, had a handful of high flying dunks, and established himself as a big time shotblocker on the defensive end. Jones continues to get more consistent, which is bad news for opposing foes in the Big 12.

— One of the more highly touted unsigned recruits left out there, CJ Leslie, turned some heads with the activity and athleticism he showed on both ends. Considered by most as a new age hybrid forward at the next level, he got plenty of burn at the small forward slot in practice and showed mad potential in the process. The bouncy big man from Raleigh really showed his potential as a beast on the glass and as a shot blocker, due to his uber-quick leaping ability. It wouldn’t surprise us if Coach Cal made the trip down to Columbus to make a stronger push for one of Kentucky’s bigger targets by the time Wednesday rolled around.

— Another one of the more chased unsigned seniors, Josh Selby, was straight unguardable in the scrimmage session. Everyone knows he’s not a pure point guard right now, but he’s mos def in the mold of a Monta Ellis type combo guard who can play point guard in a pinch. Baltimore’s finest did a nice job running the pick and roll and basically got any shot he wanted out there, before having to answer to a group of approximately about 20 media members about his latest school list, which is Kentucky, Kansas, Connecticut, Tennessee, and Arizona.

— Smooth shooting guard Reggie Bullock isn’t going to get you any SportsCenter Top 10 dunks anytime soon, but was one of the more consistent players here. At 6-7, he was able to shoot over whoever guarded him, both from the land of three and pulling up from mid-range. The UNC commit showed his old school type of game by giving up nothing easy on the defensive end and not allowing anyone to get breakaway’s at all. This hard nosed style of play should make him a favorite of Roy Williams the second he steps foot on campus at Chapel Hill.

— NYC area guys Tobias Harris, Jayvaughn Pinkston, and Kyrie Irving all took part in the scrimmage for the East squad. Harris and Pinkston went head to head, with Harris getting the best of his NYC counterpart countless times head to head. Tobias, who is headed to Tennessee, bro

ught the full arsenal in terms of shooting the ball and putting it on the deck. Pinkston struggled mightily and it was clear he just wasn’t quite at the same level as the other forwards in the group. Kyrie Irving didn’t particularly stand out either in terms of scoring, but made some really nice reads with the rock in his hands and proved adept at running the pick and roll.

— The lone members of the “Thad Five” in attendance were DeShaun Thomas and Jared Sullinger. Both players struggled at times against the bigger, more athletic guys like Jones and Leslie at times in terms of getting their shots off. But both Thomas and Sullinger made up for things by showing “that dog” and outworking their bigger, more athletic foes inside and out. Jared really turned some heads when he put it on the deck a few times from the wing and finished with a pretty finger roll, with the left hand nonetheless.

Next Up: Powerade Jam Fest recap