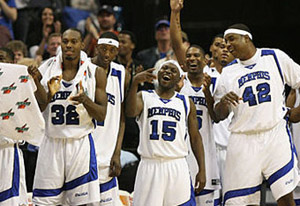 With the regular season wrapped up and teams punching their tickets to the Big Dance, what better time to take a look back at some of the best and most entertaining college teams of the SLAM era? Earlier this week, we took a look at a Fab Five story from SLAM 52 (June ’01) written by long time contributor Alan Paul, and yesterday we brought you a ’99 National Champion UConn Huskies from SLAM 29 written by another long time contributor, Michael Bradley. Today, we have a story from our good friend Cub Buenning about the highly talented, yet controversial ’07-08 Memphis Tigers team led by John Calipari and Derrick Rose from SLAM 114 (February ’08) . As we all remember, this team stormed through the regular season and March Madness only to fall short to Kansas after they couldn’t hit their free throws. This year’s Tiger team could be a sleeper pick to advance deep into March and turn a few heads. Enjoy this look back at a classic piece, and expect plenty more to come as the NCAA Tournament approaches.—Ed.

“The whole offense is about driving the ball!”

Fall basketball workouts are in full swing on the University of Memphis campus, and after about 40 minutes of wind sprints, as well as conditioning disguised as lay-up drills, the players seem excited to finally be getting some game action.

The hot new young point guard heeds his coach’s plea and blows by his opponent (someone actually viewed as one of the nation’s top defenders) but misses the teardrop over the weak-side help. Despite the ensuing roar from the hundred or so media, local boosters and even an interested group of onlookers from China lining the practice court, the bright-eyed kid dulls.

“Don’t drop your head!” From across the gym, the coach is relentless.

“Hey, don’t drop your head! You missed the shot, but Joey got a dunk!”

Although this type of positive reassurance from the head of one of the nation’s elite college programs—and a favorite to take home the hardware next spring—would normally pep up a freshman in his first weeks of collegiate ball, this frosh is a bit more stubborn. What the kid fails to realize is that his teammate was able to take advantage of his man helping out to scoop up the missed shot and turn it into an easy, and loud, deuce.

What Derrick Rose doesn’t know is that his trash became his new teammate’s treasure, and what he hasn’t quite grasped is that his coach looks at the put-back dunk as a higher-percentage shot

than the one he just took.

Is this choreographed offense? Can a missed shot really be considered setting a teammate up within a half-court set?

Head Coach John Calipari and the Memphis Tigers are an experiment to inform you as such. With an attack built around pressure, experienced guard play and strong, athletic big men, the Tigers want to beat their opponent off the dribble on every possession. And this year’s edition might be the most suited to do so.

Back-to-back years of making it to the Elite Eight have left Coach Cal’s crew wise, but more importantly, hungry. With a bench as deep as the mighty Mississippi that snakes through this Mid-South metropolis, it’s all or nothing.

“That’s real. We’ve already come into this season thinking, National Championship or failure,” says junior guard Chris Douglas-Roberts. “We have to be in that last game.”

A player who can do pretty much everything on the court, Douglas-Roberts is the Tiger’s de facto leader. One year removed from a First-Team All-Conference USA season of 16/4/2, CDR is a pre-season All-American ready to take his team to new heights. “I feel we’re a more experienced team,” he says. “Yes, we went to the Elite Eight, but we failed. We know now what it takes.”

Believe that all of these names will play key roles, if not limited minutes, and win games for the Tigers during their upcoming season. Believe that Coach Cal will find a way to also find minutes for the ultra-strong and athletic freshman swingman from St. Patrick (NJ), Jeff Robinson. Believe that there are not enough words to do comprehensive justice to the talent on this roster.