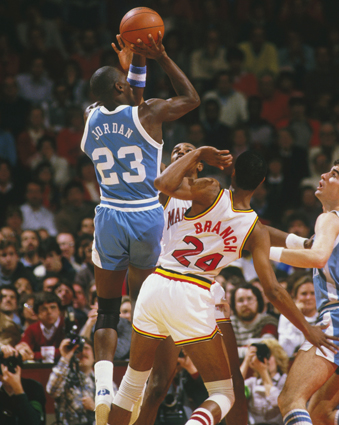 Today’s Michael Jordan’s 49th birthday, which is as good an excuse as any to run some classic SLAM x MJ content. In late 2010, we devoted an entire issue to Money, one filled with photos and features of the greatest basketball player to ever walk the Earth. It also included the Michael Bradley-penned story below, which chronicles MJ’s love for his alma mater, the University of North Carolina, from the early 80s right through to present day. Enjoy, and happy born day, Mike! —Ed.

The road to that love affair began the summer before Jordan’s senior year at Laney HS, when he and Peterson attended North Carolina coach Dean Smith’s basketball camp. Each arrived with a teammate, and the four ended up sharing a suite in a UNC dorm. Although Peterson never ended up on the same court as Jordan, the reports from his pal, who was in Jordan’s group, were positive.

“He told me, ‘This guy can really jump. He’s fun to throw alley-oops to,’” Peterson says. “I asked if he could shoot, and my friend said, ‘No, he’s an inside guy.’”

Then-UNC assistant and now head coach Roy Williams remembers his first encounter with Jordan. He had spoken with Jordan’s high school coach “Pops” Herring about getting Jordan—“He was known as ‘Mike’ back then,” Williams says—to the Carolina camp. On the first day, while registration was going on, Williams was in Carmichael Auditorium, the Tar Heels homecourt, supervising pickup games for groups of campers. Jordan played so well in the first session that  Williams asked him to stick around for another. A half-hour later,  Jordan walked the mile from the camp dorm in 90-degree heat to play some more. Needless to say, Williams was impressed with Jordan’s drive and his game.

“That night, I’m sitting down with a plate for dinner with [then-UNC assistant] Eddie Fogler, and he asked me if I had seen anything I liked,” Williams says. “I told him, ‘I think I just saw the best 6-4 high school kid I’ve ever seen.’”

After the UNC camp, Herring asked Williams about other summer opportunities. Williams suggested the Five-Star Camp in Pennsylvania’s Pocono Mountains, because its counselors did a good job coaching fundamentals. Williams called Five-Star director Howard Garfinkel and gave Jordan a ringing endorsement. “I told him, ‘You’re going to love this guy,’” Williams says. Garfinkel did and ended up giving Jordan a second week free—in exchange for the player’s working in the cafeteria. When the second week was done, Jordan had been the leading scorer at the camp, the one-on-one champ and the MVP of the Five Star all-star game. “He went from being unknown to being one of the best players in America,” Williams says.

By then, he was the number one player on the Tar Heels’ list, and they offered Jordan a scholarship. In November, 1980, he committed. Now, all he had to do was convince his buddy to do the same. Trouble was, Peterson wanted to go to Kentucky. But the two had discussed going to the same school, and Jordan persisted. “I didn’t realize how good he was going to be,”  Peterson says.

The two players ended up roommates as freshmen at Carolina, and Peterson recalls his first impression of Jordan was as “a joking type.” He was also amazed at how easily his roomie could fall asleep. “If it was time to crash, he was out in two minutes.” More than anything, Peterson noticed Jordan’s competitive side. It didn’t matter whether they were playing pool, ping-pong or basketball, Jordan wanted to win. For instance, although he led all scorers in the 1981 McDonald’s All-American Game with 30 points, Jordan wasn’t awarded the MVP. It went to Adrian Branch, who scored 24 and was headed to Maryland. “From that point on, whenever we played Maryland, I knew [Jordan] was going to be something else,” Peterson says.

Jordan averaged 13.4 ppg and shot 53.4 percent during his first season with the Tar Heels, earning ACC Freshman of the Year honors. Peterson’s high school teammate had given the proper scouting report: Jordan could run and jump, but he wasn’t able to shoot very well outside the paint. And his approach to defense wasn’t always enthusiastic, although it did improve as the year went on. But nobody remembered anything else about Jordan after he hit the 15-foot jumper to beat Georgetown in the ’82 NCAA title game. From that point on, he was a star. And even though there were questions about his shooting and D, Jordan had been set on the path to greatness.

Peterson says you could see it the following summer during pickup games at UNC’s Carmichael Auditorium. Players from Duke and North Carolina State would join the Tar Heels for the runs, which could get pretty spirited. Jordan didn’t play like a freshman; he was way beyond that. “When he hit that shot, he just took off,” Peterson says. “His confidence soared.”

Jordan was named All-American as a sophomore and averaged 20.0 ppg, thereby rebutting those old wisecracks about how Dean Smith was the only person ever to hold Jordan under 20 a game. The Heels finished 28-8 and advanced to the NCAA championship game, where they were upset by Indiana. Jordan had improved his outside shooting and his defense. He boosted his rebounding average from 4.4 to 5.5 rpg. He was becoming a more complete player and setting the stage for his big final campaign. At the same time, he avoided the aloofness of many top-shelf players.

“He was wonderful with his teammates, gregarious and open,”  Williams says. “He developed the mentality of pushing his teammates more in the NBA than when he was here. He was in his own way a leader, but he still had other players, like James Worthy and Sam Perkins, that he deferred to. Once he was in the NBA, he became a vicious leader, and I mean that as a compliment.”

Jordan’s junior year was an individual triumph but one that ended in extreme  disappointment. He was a consensus All-American again and won the Wooden and Naismith Awards, but he was handed another Tourney exit by the Hoosiers, this one a high-profile demise, due to UNC’s top ranking and national title expectations.

Faced with the depressing plight of returning to campus after the Indiana loss, Jordan avoided basketball and found solace in a new challenge, one that has been a borderline obsession ever since: golf. Peterson was taking a psychology class at North Carolina with Tar Heels golf team star (and later PGA standout) Davis Love III and was lured to the course as a means of forgetting about the season. Peterson asked Jordan if he wanted to go, and a monster was born.

“We went to the driving range the first day, played nine holes the next day and 18 holes the day after that,” Peterson says. “We were hooked.”

Jordan embraced golf, but as he hit the links with a vengeance, his true love remained the basketball court, and he was about to move on. Not long after the Tournament, he announced his decision to leave Carolina, a difficult choice but a near necessity given his expected Draft status, the opportunity to thrive on the professional level and the chance to get some cool shoes named after him. Jordan returned to North Carolina to complete his degree in cultural geography in 1986, and he continues to come back to Chapel Hill to watch games and visit his former coaches and friends. As much as he is identified with the Bulls, it is UNC that is his home.

“He gets fired up for the big games,” Williams says. “My first year here, he called me after a tough loss and told me how it killed him. He was at the National Championship game in 2005 and in Detroit at the Final Four last year. I saw him at halftime [of the title game], and he was so excited.