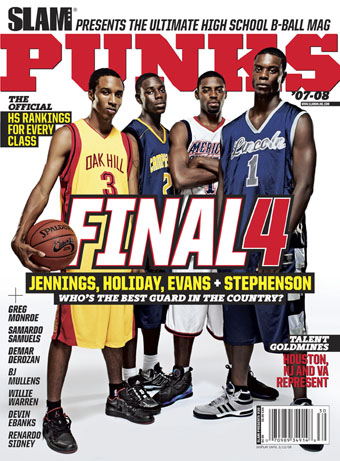 It’s easy to say this break between the end of summer and the start of basketball season is a down time for high school hoops. Contrary to popular belief, that’s false, regardless of what my long break between posts might indicate. Hopefully, you’ve all had the chance to check out our new PUNKS section on the site by now. The microsite, sponsored by Nike, you can get up-to-date news specifically about high school hoops, just like Mutoni does on the front page. There’s also the ongoing top 50 high school teams countdown, which should be finished by the beginning of the season (note: one team that was omitted, LeFlore HS of Mobile, Ala., would have easily made it, but the countdown was finished before top 2009 prospect DeMarcus Cousins transferred to the school). Then, we have the SLAM Fresh 50 rankings for the top high school players in the class of 2008, Fresh 25 for 2009 and Fresh 10 for 2010. I know I haven’t updated it in a while, but I actually have a reason this time. My newest rankings will be in PUNKS, our annual high school-only magazine, which is in stores now, and also features a couple stories by yours truly. Look out for my recap of the summer of 2007 in that. The best features of the PUNKS site, however, have nothing to do with today’s high school players. Similar to Russ’ DITC features, we have old school features from the SLAM archives about some of the best prep ballers from yesteryear , as well as SLAM All-Americans, going all the way back to 1994. Sounds good, right? Check it out and judge for yourself.

People always ask where I get my info from when it comes to high school players. Although I travel to events and see a lot of top prospects and sleepers around the nation, I’m in Philly (East Coast bias, stand up!), so obviously I can’t see every kid out there. While I do have a pretty well-connected network of sources (from high school, AAU and college coaches to people who just see a lot of ball), it’s 2007, so I do use the Internet to stay on top of things. There are a million sites out there (this one is pretty good) that claim to be the best when it comes to high school hoops, but I wanted to recommend the ones I frequent on the regular.

If you’re really into high school recruiting, a lot of the sites with the most/best info require a subscription, unfortunately. My SLAM privileges get me access to Prepstars, which has solid info and isn’t over the top as some of the other sites. One of those such sites is Hoop Scoop, which has a lot of names and info, but goes as far as ranking the top fifth-graders in the nation. For those of you who complained about us ranking 10th-graders, trust me when I say it gets a lot worse than that. The two mega-sites when it comes to recruiting, whether it’s basketball or football, as well as more than you needed to know about anything in sports in general are Rivals and Scout. They’re almost too well-informed when it comes to what schools a kid is looking at, what events he’s going to, what he ate for breakfast—you get the picture. On the free tip, a good place to start is USA Today, at least when basketball season starts. I don’t always agree with their national rankings, but they do a good job covering the nation. Of course, the best sources for in-depth info about a particular team, player or region are the local papers in that area. To keep up with the constant frenzy of verbal commitments by high school kids to colleges these days, I hit up CSTV’s Hodge Report . Another site I make sure to visit is the Big East Basketball Report, which focuses on Big East teams, but often has info about prospects around the nation. Two college basketball writers who write about recruiting quite a bit are Jeff Goodman of Fox Sports and Gary Parrish of CBS Sportsline. Last but not least, my man AlonzoWeatherby from Reebok recently started a blog and with his inside info of grassroots hoops, expect to read some interesting stuff on there.

Before I go, I want to shout out my man Stevie Newton. Stevie is one the kids I work out in Philly. He played for Simon Gratz High School (‘Sheed’s alma mater), one of the most famous high school basketball programs in the nation—let alone the city—where he was a hell of a defensive stopper. Stevie grown an inch or two and added to his offensive game since his Gratz days and he’s now a 6-0 combo guard, whose pull-up J is wet. Anyway, back on Labor Day, right before he was getting ready to go to college at Mercyhurst North East, a junior college in Pennsylvania, Stevie was shot at a cookout in his neighborhood. Fortunately, he was only hit in the arm and wasn’t seriously injured, but he will have to miss the basketball season with a medical redshirt. Back in July, I mentioned Keith “Simms” Mitchell, who got shot earlier in the summer and ironically, is from the same ‘hood and goes to the same juco as Stevie. Shout out to my man Jeff Porter, the head coach at the ‘Hurst, for taking all these Philly kids with bullet holes in them. I’ll be back with another School Daze soon, featuring my top 10 prep schools and my take on the fall signing period.