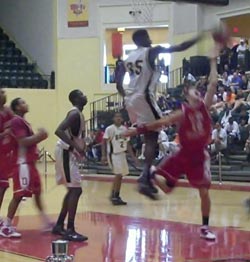 As a high school and AAU player back in the middle of this decade I remember yearning to go to Nationals year in and year out with whichever AAU team that I was playing for at the time. I loved the traveling, environment and competition but as a perpetual junkie of following players throughout their careers (trust me, I realized this early) I loved the Nationals because it brought a lot of the best players in the country to one spot and I had the chance to play against/watch them compete.

With teams out in the dessert in Vegas, both the 15U and 16U Super Showcases within days of the Nationals and the calendar nearing the end of the most busy recruiting month of the year it was easy for some evaluators and coaches to say that the field of competition was watered down. There was an abundance of talent on hand to take a look at not just in the 2011 class but also in the 2012 and 2013 classes too.

The one issue that I did agree with others on regarded the quality of play that was on hand—not as a result of a lack of talent level or effort but rather because it was the tail end of the AAU season and players were tired as hell. And it showed in the form of missed layups, short jumpers and facial expressions that screamed “GET ME HOME! NOW!”

Overall, though, the Nationals were a great chance to see top talent and evaluate it while comparing and contrasting opinions with coaches and other evaluators.

Now lets get to the meat and potatoes section. Aggrey Sam already told you about the Showcase and how Each 1 Teach 1 took the 17U chip. Clearly content with his AAU play and his recruitment at this point, Austin Rivers decided to sit out the Nationals which caused E1T1 to drown early in pool play before even having a shot at the Championship Bracket.

So it makes sense that two teams that didn’t compete in the Super Showcase were fresher and made the 17U Final. The Arkansas Wings–a team that played on the Nike EYBL but did not qualify for the Peach Jam–took home the title over the athletic, sharpshooting Carolina Ravens, a team that was just as underrated heading into the tournament. Spearheaded by a big three of Kye Madden, Darion Griswold and Aaron Ross that could get it done inside and out, the Wings took full advantage of their versatility to muscle baskets from the interior, hit tough and contested midrange shots and also hit the occasional deep jumper to keep their opponents off balance all tournament long.

In a game where the Wings had a lead that hovered around 7-10 points for much of the first three quarters, the Ravens showed heart by never giving up and coming back to finally tie the sc

ore on a Demarcus Harrison three pointer with 20 seconds to play. From there the Wings put star player and tournament MVP Kye Madden the ball to create and after a crossover dribble he was fouled in the lane. Madden calmly sank both free throw attempts in a one and one situation with 4.7 seconds left on the clock. With three fouls to give at hand for the Wings, the Ravens didn’t even get a shot at tying the game and the Arkansas Wings were crowned National Champions.

In the 16U division the Finals turned out to be a rematch of one of the semi-finals of the Super Showcase. The dominant All-Ohio Red squad squared up against a BABC team a week and a day earlier with All-Ohio Red coming out on top by five, 47-42.

This championship was an all out battle. In the first half both teams struggled to get going at first but the pace started to pick up in the second quarter. All-Ohio looked to be in firm control behind the steady play of guard Myles Hamilton until BABC point guard Jaylen Brantley knocked down two threes in a row to keep his team in the game going into the half. The third quarter was the Georges Niang show on offense as the undersized power forward simply could not be stopped as he used an array of moves and finished with both hands around the rim consistently. All-Ohio wouldn’t go away, as small forward and match-up nightmare Teddy Hawkins hit a three to keep the game close at 43-38 going into the fourth. BABC star big man Nerlens Noel was saddled with foul trouble the whole game and was quiet until the end where he made his presence felt in the fourth quarter by incredibly blocking four shots in a row without fouling out to ice the game, 56-53.

Those are the National Championship recaps and here are the players who impressed me most, as Aggrey Sam would say: