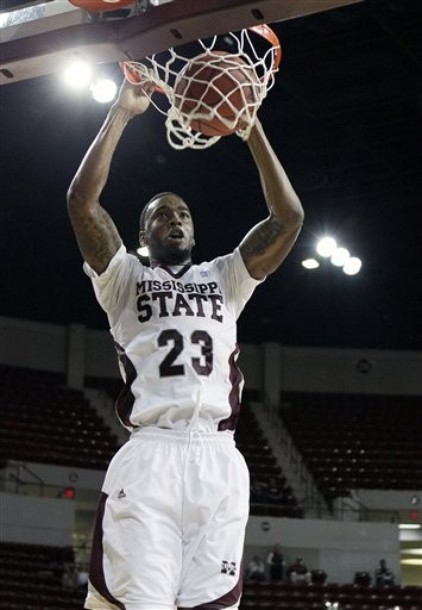 After jettisoning across the country and changing agents once in the process, Arnett Moultrie landed at his pre-draft destination. Now receiving representation from Derek Lafayette, he ventured out to L.A. and calls Impact Basketball home as far as his training needs are concerned. On the left coast already for pre-draft and AAU stuff, SLAM was invited to come in and check out Moultrie’s first two days of training.

Before we get started on what he did at Impact, many of you may be asking yourselves, ‘Who is Arnett Moultrie?’

Flying under the radar at Raleigh Egypt HS in Memphis, he wasn’t offered a scholarship from the hometown Tigers. UTEP coach Tony Barbee, who coached under Cal at Memphis for six years, had heard about the 6-10 angular big man through some of his Memphis connects and wooed him to UTEP. After posting averages of 9 and 8 as a freshman, he caught the eye of NBA personnel wondering who the athletic big man approaching 7 foot in C-USA was. A summer with USA basketball, a NCAA tourney appearance, and an even better sophomore season had UTEP looking like a program on the rise nationally. Coach Barbee pulled a carpe diem and bounced to Auburn, leaving Arnett with a tough decsion: Stay at UTEP for new coach Tim Floyd or bounce to the League?

Moultrie chose neither. In a relatively unprecedented move for a player who would have surely been picked in the 2010 NBA Draft, he opted to transfer to Mississippi State and sit out the season. This was supposed to be the year for Mississippi State, too. They had a senior point guard who could create his own shot against anyone (Dee Bost), a 6-8 wing who was a top 30 recruit (Rodney Hood), a former #1 HS player in the country who was the biggest enigma of college basketball (Renardo Sidney), and the most highly touted transfer in the country (Moultrie). Everyone knew that Kentucky was the favorite, but Mississippi State was expected to at least put up a fight and hold their own. Unfortunately, they couldn’t even hold onto themselves.

Two teammates got in a fight on national television, there were issues on and off the court all season long, and the team constantly underachieved. The team went 21-12 and was bounced in the first round of the NIT. Dee Bost graduated, Rodney Hood announced he was transferring, and Renardo Sidney left for the NBA. Throw in a few more transfers and it’s easy to see why Arnett Moultrie opted to take his game to the League instead of sticking around a program rebuilding from the ground up.

With his collegiate career over, it’s now time for Moultrie to get his game right for the Draft. Upon walking in the gym in Reseda, the first thing that stood out about Moultrie was how big the dude really was. He’s every bit of 6-11 and looks closer to 245 pounds than his listed weight of 225. Given the athleticism he already possesses to go along with size like that, it’s not out of the question that he could play both power forward and center in the pros, making him even more valuable as a prospect.

Once the balls hit the court, I was immediately taken aback by how Moultrie shot the ball from mid-range. Looking over some clips on Synergy Sports Technology, you could see that while he could shoot the ball, it wasn’t exactly his forte when he was in Starkville. The consistency that he showed on his J out to 18 feet led us to believe that he could develop into a legit pick-and-pop threat, especially as he continues to clean up his shot and get his release point a little higher.

Not just a guy who wants to hang around the perimeter, the 21 year old showed that he can also do work with his back to the basket. Displaying a jump hook with either hand, you could see the raw potential that he had as a big man by some of the pretty counter moves that he showed when he got the ball on the blocks. Anyone who had seen him play before already knew the type of athlete he was, so it wasn’t a surprise to anyone in the gym when he was getting a foot above the rim to throw down some breathtaking dunks during the drills.

In workouts of this nature, it’s difficult to evaluate defense, passing, basketball IQ, etc. You’d hope that you’d be able to see a guy with the mobility of Moultrie get out and defend the pick and roll, or perhaps get a feel as to why he only averaged 1 block per game despite being a freak athlete. But it was more-so an exhibition of the players’ offensive talent, which was enough to leave the half dozen NBA executives who were in the gym visibly happy when they walked out. Looking at his Draft status, we’ve been hearing that Moultrie will land anywhere from the late lottery to the middle of the first round. He’s going to surprise some people with his ability to shoot the rock and with the upside that he has once he receives NBA skill development. Though his Draft stock is up in the air, the one thing that is certain is that he will have a more stable environment wherever he lands than he had his last two years in Starkville.