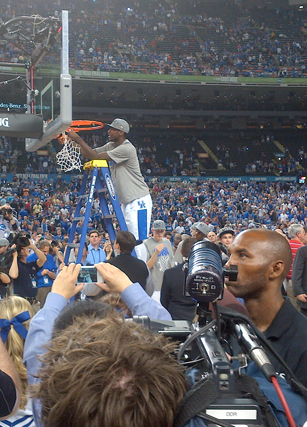 “The road ends here,” the NCAA tells us. Indeed it does. A college season that started as the only game in town and picked up pace with games such as a November prelude to tonight’s very matchup reaches its culmination on a stormy night in the great city of New Orleans.

At the season’s start I thought two college teams were head and shoulders above the rest in terms of talent: North Carolina and Kentucky. UNC had some odd nights off this year, but it’s hard to even judge the Heels fairly after all the injuries they had.

Kentucky had no such problems. The Wildcats, dripping with future pros, played great basketball all season long. Not that Coach John Calipari was just rolling the balls out; he took a group that could have been entirely focused on individual goals and quickly molded them into a cohesive unit. UK rolled through the regular season and despite a meaningless loss in the SEC Tourney entered the NCAAs as the top-ranked overall team. Nothing that has happened since the Tourney tipped has dispelled their position as favorites.

Kansas is obviously no Butler. It’s one of the most storied programs in the land, won a title (over Calipari’s Memphis team) in ’08 and boast some big-time talents as well, most notably Thomas Robinson, Tyshawn Taylor and the giant Jeff Withey. But it’s not an all-time great Jayhawk roster, and they honestly could have easily fallen to Purdue or Ohio State in this Tournament.

All of this background adds up to Kentucky being the inarguable favorite. Vegas puts the line at -6 for UK, and in many ways, the Cats should cover with ease.

BUT, as has been said a billion times, the game is not played on paper. Kansas should be the looser team to start, and they boast the experience of winning games late, like they did just 48 hours ago. Kentucky carries a burden of history—the program itself has not won a title since ’98 which is a long time for this fanbase, and Calipari was carrying around the label of “best coach not to win a title” two years ago. As former SLAM writer Dan Wetzel so eloquently spelled out in a Yahoo column that ran yesterday, TK/LINK, Cal really needs this win to shut some people up.

Will that weight make Cal tight? Will it make his players tight? Will the Jayhawks feel so emboldened by their role as an underdog and recent late-game success that they keep this close to the last minute? And if they do that, couldn’t they almost be EXPECTED to win at that point?

So…start commenting if you’d like, and then follow along as I live blog all the action starting around 9:05 EST.

Hello friends. I’m live at the TOP of the Superdome. The weather outside was nuts earlier. Crazy thunder, lightning and sheets of rain. It’s windier inside though! Like the other night, it’s got to be like 58 degrees with 22-mph winds in the Upper Press Box. I brought a waffle shirt to keep me warm this time though.

And again, I’m lucky to be in here. Pretty calm now as the teams shoot casually and the school bands play 80’s music. It’ll be rocking in here soon enough.

-The Fray (who I’d never heard of before reading the press release about them yesterday) with a unique rendition of the National Anthem. Not who I would’ve gone with, but what do I know?

-And “the ball is tipped…” and the tip is won by Kansas. Quick Taylor bucket puts Kansas up, 2-0.

-Kidd-Gilchrist gets fouled HARD on move to the basket. Makes 1-2 from the line. 2-1, Kansas.

-Teague with an effortless end-to-end to tie game at 5.

-Dome is packed again. I’d give edge to Kentucky fans, but the neutrals are pulling for Kansas in hopes of an upset, so I’d say sound is split pretty close to 50-50.

-Hmmm, after those two quick UK buckets I might go 60-40 Kentucky faithful.

-Big block from Withey though.

-Davis answers with a block of his own. Leads to a MKG drive. Fouled. Hits both FTs. 19-12, Kentucky.

-Robinson dunks to cut lead to 19-14. “SLAM” flashes on the scoreboard. Where are our royalties????

-Rugged play so far. Lot of flying bodies. Kentucky doesn’t have to play pretty, though, so it’s not like the physicality fazes them.

-Kansas has obviously shown a stronger ability to come back than any team in this Tournament, but Kentucky is not who you want to get down too far too.

-Oh, that Kansas dance (and the Kentucky student section one that followed) during the timeouts was a “flash mob” dance. #LAME

-National Player of the Year Anthony Davis has yet to score, but he’s still made several key plays at both ends of the floor and, because Kentucky has so much talent, his points haven’t even been needed. And with that, Lamb hits a baseline jumper, giving himself 12 points and the Cats a 39-21 lead.

-Kidd-Gilchrist gets to the hole to make it 41-23. Not sure he can shoot; not sure if it matters.

-Robinson answers with a basket to put deficit back at 16.

-Then, after a Kentucky turnover, Kansas gets last possession of half. Sweet move from Taylor makes it 41-27, Kentucky, as teams go into locker rooms.

-WHEW. TV timeouts and flash mob dances notwithstanding, that was a pretty action-packed first half. Kentucky really played well on offense, sharing the ball and shooting 53 percent from the floor.

-I need to take a little walk and warm up my fingers. I’ll be back.

-Back. Other numbers…Kansas shot 33 percent from floor. Robinson was just 3-11 but still managed 8 points, tied for team-high honors with Taylor. For Kentucky, Davis ended half with 0 points, but he has 9 rebounds, 4 assists and 3 blocks.

-Kentucky re-takes floor to loud applause with six minutes til second-half tip. Kansas comes out with 3:30 left. The Jayhawks need to have figured out a way to get some stops.

-Kentucky gets the ball to start second half, runs another well-executed half-court possession and Jones draws a non-shooting foul. Cats turn ball over moments later and then Robinson scores for KU. 41-29, Kentucky.

-I really hope my UKs and KUs have been clear tonight.

-Withey misses an alley-oop dunk that would have cut lead to 10. Needless to say, Kansas cannot afford to miss easy opportunities.

-After Davis gets his first point of night on a free throw, a Jones steal and dunk pushes lead to 46-30. Timeout, Kansas.

-Johnson scores two times in a row for Kansas to cut lead to 46-34. Timeout, Kentucky.

-Doron Lamb on fire. Back-to-back threes give him 20 points and put Kentucky up, 54-38, with exactly 10 minutes left.

-After two FTs from Davis, Johnson hits a three for Kansas. 56-44, Kentucky.

-Announced attendance for tonight: 70,913. Few empty seats in the far upper reaches behind the baselines and in the student sections, but there’s a lot of people in here. I’m a pretty big fan of this building (save for the wind up here!). As I’ve tweeted, I would REALLY like to see the NBA bring All-Star Weekend back to NoLa and just play it here in the Dome.

-After a Taylor basket, Withey gives Davis a taste of his own medicine with a big block that leads to a Taylor and-one at the other end. Taylor makes the FT to cut lead to 9, 59-50.

-This Kansas team does not quit.

-After another lengthy timeout, Robinson makes 2 FTs to make it just 59-52.

-Two Robinson FTs make it 62-57. Is this why ESPN put Kentucky on the cover of its choke issue??

-Traveling call on Johnson, so Kentucky gets ball back with 23.5 seconds left. Lamb gets fouled with 17.5 left and makes both FTs. 67-59, Kentucky. Fans going bonkers.

-And that’s it! Kentucky is your 2012 NCAA Champion. Fireworks ensue!

-I’ll come back and clean this post up and answer any comments directed at me, but it’s time to go see some net cutting. (And do some reporting! This is not the last time you’ll be reading me on Kentucky.)

-Thanks so much for following along, everyone!