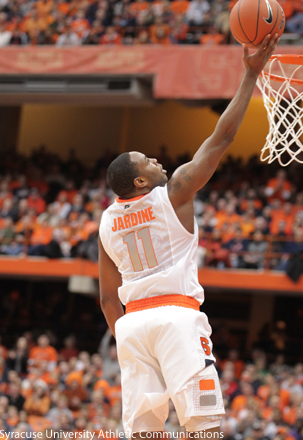 College basketball contrarians may still be basking in the afterglow of the Year of the Mid-Major, but they’d be wise to watch out for a backlash from the big boys. It was fun to see Butler and VCU in the Final Four, if only because it stifled the BCS conference shills, but the little guy can’t stay on top forever. About the closest thing to a surprise next March could be Vanderbilt, and the ’Dores get their mail in the pricey SEC neighborhood.

Blame the returns of some big-time players for the old-money programs’ expected success. Harrison Barnes, Tyler Zeller and John Henson re-upped in Chapel Hill, OSU welcomes back Jared Sullinger and Terrence Jones is in UK colors again. Add in top-flight freshmen to those holdovers, and you have the prospect of a pretty interesting showdown in New Orleans. There might be room for an interloper, but bet on the chalk this year—for a change.

3. Ohio State
Key Players: William Buford, Shannon Scott, Jared Sullinger, DeShaun Thomas
The Skinny: Sullinger might have been the top pick in the ’11 Draft had he left, but he wants a lockout-free season and the chance to lift the Buckeyes to the title. Buford and Thomas will be big helps, as will new point man Scott.

6. Syracuse
Key Players: Rakeem Christmas, Scoop Jardine, Kris Joseph, Dion Waiters
The Skinny: If Christmas and CJ Fair can combine to replace the inside production of Rick Jackson, the Orange will be lethal, because its backcourt is packed with talent.

8. Memphis
Key Players: Will Barton, Joe Jackson, Adonis Thomas
The Skinny: The Tigers aren’t babies anymore, and they have everybody back from a dangerous ’10-11 outfit. Adding Thomas to the mix makes them even more dangerous, while JC newcomer Stan Simpson could be a difference-maker up front.

9. Baylor
Key Players: Quincy Acy, Pierre Jackson, Perry Jones, Quincy Miller
The Skinny: The Bears’ late-season collapse torpedoed their ’11 Tourney hopes, but there should be no repeat this time. Acy, Jones and Miller are top-shelf, and if JC newcomer Jackson can handle the point, look out.

10. Louisville
Key Players: Chane Behanan, Wayne Blackshear, Kyle Kuric, Peyton Siva
The Skinny: Coach Rick Pitino said last year was just a warm-up for ’11-12, so here we go. The Cards have plenty of perimeter pop and should be pressing fools, but it’s up to the big fellas to make this year special.

11. Florida
Key Players: Brad Beal, Kenny Boynton, Mike Rosario, Erving Walker
The Skinny: The Gators will have a backcourt like few others in the country (all four players listed above will belong to it), and it will have to produce huge numbers every night, because the big guys are a little green. It will.

12. Xavier
Key Players: Kenny Frease, Tu Holloway, Mark Lyons, Dezmine Wells
The Skinny: The Musketeers have the inside-outside combination to dominate the Atlantic 10 and the depth to make a real mark on the national scene. Pay particular attention to Holloway, one of the college game’s more underrated stars.

13. Pittsburgh
Key Players: Khem Birch, Ashton Gibbs, Nasir Robinson, Travon Woodall
The Skinny: The Panthers’ Final Four drought currently stands at forever. Gibbs and Robinson form a great starting point, but if the kids don’t step up, it will be forever and a year.

14. Michigan State
Key Players: Keith Appling, Branden Dawson, Draymond Green, Delvon Roe
The Skinny: Everything seems to be in place for some big fun, provided someone steps up and runs the team. It won’t be Kalin Lucas, who left after what seemed like his eighth season at MSU, but it could be Appling or even the multi-talented Green.

15. Kansas
Key Players: Ben McLemore, Travis Releford, Thomas Robinson, Tyshawn Taylor
The Skinny: The Jayhawks lost a lot of talent. But you never have to worry too much about Kansas. Taylor and Robinson will score, and the youngsters have great pedigrees. Want to bet against ’em? We’ll take your action.

17. Marquette
Key Players: Vander Blue, Jae Crowder, Darius Johnson-Odom, Jamil Wilson
The Skinny: The Golden Eagles are going to score a bunch—bet on that. But it wouldn’t be such a bad idea this year to play a little better at the other end. Lock it down some, and Marquette could be really dangerous.

18. Alabama
Key Players: JaMychal Green, Tony Mitchell, Levi Randolph, Trevor Releford
The Skinny: The big-league crowd was furious ’Bama and its 12-4 SEC mark didn’t rate an NCAA invite, but everybody should be happy this year. The Tide has talent at every position and some righteous rage after last year’s snub.

19. Missouri
Key Players: Lawrence Bowers, Marcus Denmon, Michael Dixon, Kim English
The Skinny: Mizzou features a deep roster, one that includes last year’s top-five scorers. The Tigers can get after you at both ends and, even with Coach Mike Anderson gone, should play an exciting 40 minutes every night.

20. Texas A&M
Key Players: Jamal Branch, David Loubeau, Khris Middleton, Kourtney Roberson
The Skinny: This is not a bad spot for new coach Billy Kennedy, who steps up in class from Murray State. Middleton is a future pro, and freshman guard Branch has the skills to run the show. Don’t be surprised if the Aggies are your Big 12 champs.