New Blood and the Establishment 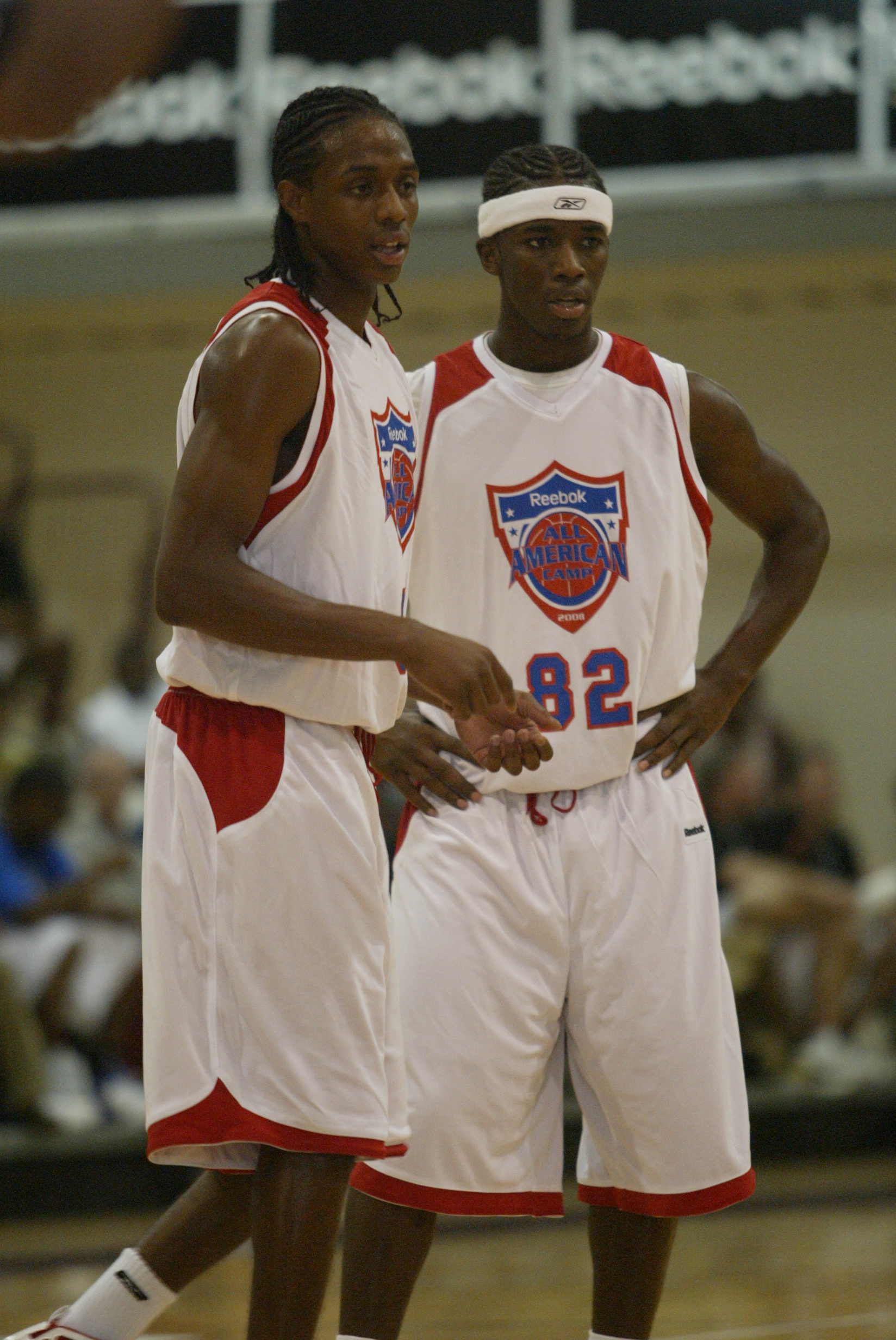 Last night, at the conclusion of the Reebok All-American Camp at Philadelphia University, I realized a few things. First, what I was preaching to anybody who would listen last summer was true: 2007 spoiled us. That class (the Beasley, Rose, Love crew) was special, from top to bottom. The class of ’08 had some true superstars and some nice depth after that, and while it didn’t compare to ’07 overall, it was a solid class. 2009, however, is a different story. There are some very good players, but most of the consensus top 10 prospects wouldn’t have come close to making the McDonald’s game if they were a year ahead.

That said, the top of the class is very intriguing to me. For the most part, it’s been somewhat static since these kids were freshmen. Yeah, a couple kids have skyrocketed high in the rankings and others have fallen off dramatically, but many of the big names have been talked about in grassroots circles for a minute. Now, the class of 2010 is a little more wide-open, but that has more to do with the lack of players who have asserted their dominance than the deal with ’09, where the rulers haven’t been knocked off their thrones.

This brings me back to Reebok. There weren’t enough truly elite prospects in Philly this week to say there was even a chance for major upheaval in the world of high school hoops, but there certainly was a big enough contingent of pretty anonymous (at least previously) kids that somebody could make a name for themselves and somebody else could be easily labeled as overrated. Below are a few of the players with national reps that didn’t lose face this week:

Kenny Boynton, 6-2 combo guard, American Heritage (FL), 2009: It’s not even debatable who the best guard in the camp was in terms of consistentcy and production, as Boynton flamed each and every player he faced with his arsenal of killer crossovers, strong athleticism, outstanding range and terrific competitiveness, not to mention his smothering D.

Junior Cadougan, 6-0 point guard, Christian Life (TX), 2009: The Canadian floor general just gets it done–he uses his strength to bully smaller guards, finishes determinedly in the paint and keeps them honest from the outside, but most importantly, he wins.

Karron Johnson, 6-7 post, Mt. Zion (NC), 2009: Johnson is definitely a post player–not a wing, although dribbling and outside shooting have gotten better–because his physicality, athleticism around the rim and dominance on the boards make him much more effective than he is on the perimeter.

Kevin Parrom, 6-5 wing, South Kent (CT), 2009: Parrom, who some touted as the second-best player in New York (after Lance Stephenson) after his junior season (Parrom recently left St. Raymond’s in the Bronx for prep school), showed that with his improved shooting and ballhandling he’s now a true wing, but maintained his inside game and work on the glass.

Michael Snaer, 6-5 wing, Rancho Verde (CA), 2009: Snaer’s usually reliable J was a bit inconsistent, but his relentless aggressiveness, playmaking ability, rebounding from the perimeter and intense D more than made up for it.

Brennan Cougill, 6-9 post, Heelan (IA), 2009: Cougill’s rugged post moves, soft hands, nice touch, ferocity on the boards and wide frame were all impressive, but the fact that he knew his limitations was even better.

Mike Shaw, 6-8 combo forward, De La Salle (IL), 2011: The precocious youngster played on one of the most unselfish teams in camp (well coached by Philly’s own Ellis “Chuck” Gindraw), but even without the benefit of constant touches it was hard to ignore Shaw’s versatility, high skill level, impressive frame and somewhat polished inside-outside game.

Jayvaughn Pinkston, 6-6 combo forward, Loughlin (NY), 2010: Possibly overly hyped when he was younger, some have cooled on Pinkston’s game because he hasn’t grown much, but the widebody’s physical nature and unique mix of quickness, post-up ability and off-the-bounce game make him a matchup headache.

Sherrod Wright, 6-4 wing, Mount Vernon (NY), 2009: The next in line at Money Earnin’ has been patiently waiting his turn and judging from his strong drives, nice stroke and solid athleticism, he’s ready to take his place in his school’s lineage of stars.

Richard Howell, 6-7 post, Wheeler (GA), 2009: While Howell wasn’t perfect, my perception of him changed as he didn’t attempt to be a full-fledged wing; rather, he’s a work-in-progress as a face-up post who can pass, handle and shoot effectively from 15 feet and in, while also providing a physical presence on the boards and in the paint.

Pe’Shon Howard, 6-1 combo guard, Oak Hill (VA), 2010: By playing on a national stage during the high school season, many are already familiar enough with Howard’s game to list his shortcomings, but he showed progress in becoming more of a point guard, largely made an effort on D and while his shot selection wasn’t the best, his persistence was admirable.

Brandon Triche, 6-4 wing, Jamesville Dewitt (NY), 2009: Triche (son of ex-Syracuse baller Howard; DC/Seikaly/Sherman era) started out his high school career as one of the more touted players in his class and while missing action on the AAU/camp circuit due to injury might have taken away some of his luster, he showed at Reebok that he was a solid all-around wing by rebounding, playing tough D, finishing strong and hitting open jumpers.

Taking into consideration that there were about 160 kids at the camp and there were competing events running at approximately the same time, it was a great opportunity for lesser-known players to get some shine. Some of those included:

Sam Dower, 6-9 post, Osseo (MN), 2009: As solid as they come, Dower’s post moves, short jumper and rebounding made him one of the more effective post players at the camp.

Rahlir Jefferson, 6-6 wing, Chester (PA), 2009: I’ve known Rahlir for a couple years now and while he’s a great kid, I wouldn’t play myself by writing his name if he didn’t show off his ridiculous athleticism, terrific motor, defensive stopper potential and unselfishness.

Tyrone Garland, 6-0 combo guard, Bartram (PA), 2010: A classic Philly scorer, Garland’s smooth yet aggressive mentality was effective, as he drove into the lane and knocked down shots off the dribble, as well as showing good point-guard instincts as a distributor.

Matthew Staff, 6-9 post, Memorial (TX), 2009: A face-up four man, the mobile Staff was excellent in the pick-and-pop from deep, but also contributed on the boards and showed a high skill level.

Timothy Frazier, 6-0 point guard, Strake Jesuit (TX), 2009: Frazier, one of the quicker players in attendance and used his frenetic stop-and-go game to penetrate and drop dimes, apply defensive pressure and get his own offense going when necessary.

Dundrecous Nelson, 6-1 combo guard, Murrah (MS), 2010: Nelson’s ability to get to the rack and finish among the trees, start fast breaks with his defense and use his athleticism to help out on the glass all stood out, but tremendous motor was the hallmark of his game

Jared Harrison, 6-0 point guard, Salmen (LA): Hailing from new Knick Chris Duhon’s alma mater, Harrison was one of the better point guards in attendance, as he played tough D, distributed the rock, finished at the rim and rained in jumpers from both mid-range and deep.

Jerian Grant, 6-4 wing, DeMatha (MD), 2010: Son of former NBA player Harvey (Horace’s twin), Grant should follow in his older brother’s footsteps as a high-major recruit (Jerai will be a sophomore at Clemson), due to his length, solid ball skills, excellent fundamentals, nice outside touch and surprising explosiveness.

Patric Young, 6-8 post, Paxon (FL), 2010: Powerful and athletic, Young immediately passed the “look test” of a future big-time recruit, but he also backed it up with an outstanding motor, defensive presence, a thirst for rebounding and determined (and sometimes dynamic) finishing on offense.

Shaquille Thomas, 6-6 wing, Paterson Catholic (NJ), 2010: The nephew of Tim and little brother of New York Liberty rookie (and slamonline.com blogger) Essence Carson, Shaq’s game is worthy of his bloodlines, as the slender and athletic youngster is skilled, versatile and fearless on drives.

Dexter Fields, 6-2 wing, Olympia (FL), 2009: An aggressive, if undersized wing (at least in college, although he does have the strength for that level already), Fields was always making plays–from tough drives to the rack, to hustle plays on D.

Ironically, in a camp oriented toward individual talent, a team without a huge national name (although they had several high-major recruits) won the unofficial camp championship. As always, the camp concluded with the all-star games, which was cool as far as entertainment, but would have appalled basketball purists. The co-MVPs of the underclassmen game were Wayne Blackshear (a 6-5 wing from Chicago’s Curie High School in the class of 2011) and Ashton Pankey (a 6-8 post from Jersey’s St. Anthony’s in the class of 2010), while the aforementioned Boynton won honors in the main game.

Another story at the camp was Aaric Murray’s coming-out party. The Philly native capped a week where he continually flashed potential (albeit raw) with a 16-point, 6-rebound performance in the all-star game that only increased the buzz he had already created for himself.

All in all, the camp was solid, if only for creating a platform where relatively unknowns like Murray could showcase their talents on the big stage. It didn’t have the star power of LeBron, but I guarantee at least a handful of kids there–who didn’t come into the camp highly touted–will become a household name on the next level and maybe beyond. Whether I recognized it or not is a different story. Still, the performances of players like Boynton, his backcourt mate Brandon Knight, a more motivated Renardo Sidney and Washington duo Abdul Gaddy and Avery Bradley show even the hunted understand it’s kill or be killed in this business.

Brandon Jennings was at the camp last night. He wasn’t talking about his recent decision (believe me, I tried), but it was good see him (now that’s a killer on the court) looking happy amongst his former peers. I have a lot to say (and write; maybe now–maybe never) about him going to Europe, but for now I’ll just say I agree with it.

Also, Jason Terry was at the camp, too. He’s acquainted with top Seattle guard prospects Bradley and Gaddy (who committed and subsequently de-committed from Arizona, Jet’s alma mater, this spring) and could often be found sitting on the bench, really getting into the game. Good to see, as well. Watch out for the Mavs and his new signature sneaks.