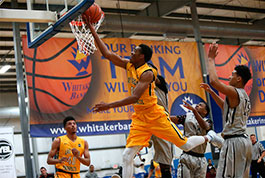 The Nike EYBL has revolutionized the grassroots game to where it is today. Instead of playing eight or more games in a weekend, Nike set up a system in which not only are players competing for something, but are also saving their bodies. Playing four games per weekend in the spring, the EYBL’s 40 teams are competing for the playoffs in mid-July, coming in the form of the Nike Peach Jam. As one can imagine, competition is legit, rivalries are born, and new names emerge on each stop of the tour.

Session two brought the EYBL to Lexington, home of one of Nike’s flagship programs in the Kentucky Wildcats. Former EYBL standouts Willie Cauley-Stein, Devin Booker, and Dakari Johnson all made their way through the Kentucky Basketball Academy to show love to their former grassroots teams before they make their way to the league. Being an open period in which college coaches can attend games, guys like John Calipari, Coach K, Roy Williams, Thad Matta, and Co. were all supplanted courtside for what was an amazing weekend of hoops.

Here are a few of the top youngsters that caught our eye in session two of the EYBL:

While Tatum may have put up better numbers throughout the weekend, Michael Porter did a lot of things that most 6-foot-9 cats simply dream of doing. Nicknamed “Baby KD,” Porter was totally fluid doing work from the perimeter and had zero problem breaking down smaller guys to get to the rack. He used his size to finish over the top of the D and provided a shot-blocking presence in the paint. When Porter has his “A game” going like he did in Lexington, there isn’t a better sophomore in the country besides DeAndre Ayton.

The biggest point guard in the EYBL, Troy Brown showed off the unique package of skills that have made him a consensus top-5 guy in the class. The Centennial product finished creatively in the paint, made some ridiculous passes in transition, and was able to defend all three perimeter positions. Troy is still developing as a decision maker (as seen by a few of his turnovers), but it’s simply rare that you see a lead guard with his combination of talent and size at just 16 years old.

A guy who I hadn’t seen yet in person, Trae Young lived up to the hype and more in Lexington. He used his deceptive athleticism to get by defenders and then finish creatively at the tin. His ability to shoot it from deep kept the D honest and anytime he had the rock in his hands, he was a threat to make a play. Already with offers from virtually the entire Big 12, Young has established himself as one of the very best lead guards in the class of 2017.

Markus Howard may not be the biggest guy, but he simply got buckets on anyone who guarded him throughout the weekend. He was fearless attacking the rim, drilled countless deep J’s, and locked up against guys six inches taller than him at times. The Arizona native will have big shoes to fill, as he”ll be replacing Duke-bound Derryck Thornton as the next lead guard for Findlay Prep.

‎A guy who is continuing to emerge on the national level, John Petty showed that he could hold his own with the nation’s finest at the 17U level. As smooth of a wing as you’ll find in the class of 2017, Petty created his own shot with ease and had no problem scoring from all three levels. He was deadly pulling up off of the bounce, got to the rack with straight line drives, and hit threes with his feet set. With offers from SEC programs rolling in virtually every week, Petty definitely showed that he’s a top-25 player in the class.

The youngest player who is getting serious burn in the EYBL, Javonte Smart proved that he is no ordinary freshman. Standing 6-foot-4 with an outstanding motor, Smart ran the show for EP Elite, created opportunities for others, and locked down on guys from all three perimeter positions. Like most young point guards, the Baton Rouge native needs to cut down on his turnovers, but you can definitely see the similarities between he and EP himself.