Cali's top HS programs and prospects battled it out in Santa Ana. 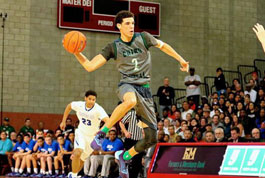 The top programs in California and in the nation took center court this past weekend in the 21st Annual Nike Extravaganza on the campus of Mater Dei HS. Over the course of two days, the yearly showcase gives Southern California fans a glimpse of basketball’s future stars up close and personal before they’re off to college and in the NBA.

The Nike X is regarded as one of the top HS showcases in the country and always seems to exceed expectations every year. Some notable Nike X alumni are Stanley Johnson, Brandon Jennings, Carmelo Anthony, Jahlil Okafor, Kyrie Irving, Kawhi Leonard, Klay Thompson and Kevin Durant along with many more.

Check out the list of top performers from Nike X below.

You can expect the Cal-bound wing to be in the group of top scorers amongst freshman next season in the Pac-12. Hickman can score from anywhere on the floor. He’s really lengthy, quick and seems to have one intention every time he takes the court: get buckets.

Bibby showcased his ability to let it fly from deep—like, Steph Curry-esque deep. He’s also a very crafty type of player who hits defenders with a series of dribble combos and pulls from anywhere on the court. Poses high IQ when playing off the ball, setting up his defenders when coming off curls. Kind of helps when your pops was an NBA vet and your head coach, too.

A lot of players tend to disregard how lethal Freedman can be when you let him get into his rhythm. I’ve yet to see him get his pocket picked in the full-court and that’s credited to how he outsmarts anyone trying to stick him. He plays north and south and is never in a rush. If you beat him to a spot, he’ll counter it. You reach, you’re looking at the back of his jersey as he’s either lobbing it up to MJ Cage or finding one of his shooters on the perimeter. Freedman can also shoot it from deep and is excellent in pick-and-roll situations.

The Oregon-bound big man had himself another great weekend and continues to make a case as why he’s one of the top bigs in his class. Cage plays well around the rim and gets great position when sealing down low. When he’s not hovering around the basket, he likes to extend out to the short corner and can knock down that 15-footer with ease. Defensively, he creates havoc with his length and will swat a couple basketballs to the first couple rows of the bleachers.

At 210 pounds, Edgar Jr., is built like a football player who rocks a basketball player’s uniform. He uses every ounce on that chiseled frame to his advantage to outmuscle anyone who gets in between him and the basket. He can also shoot it from deep, but what I liked the most from the senior guard was his ability to crash the boards on the defensive end. It seemed like every time a shot went up, his objective was to corral every rebound in sight.

McRae is up there with the top guards in 2019. Despite his age, he showed poise when playing point orchestrating the offense and capitalizing off what the defense gave him. Really showcased his superb handle and loves hitting that jumper at the top of the key, which seems to be his bread and butter.

Worku is that player on scouting reports with multiple stars by his name. Coaches will constantly emphasize not letting him get into a rhythm because it’ll be a long night if that happens for opposing squads. He can just go. He’s another player who’s outsmarting defenders and looking to get them into early foul trouble if they tend to face-guard him. His handle is on point and has a nice jumper in his arsenal. He also plays well reading defenses in the pick-and-roll.

Griffin is as active as they come. The type of player that’s always giving 110 percent that coaches might have to tell to chill out a bit. He has that scorer’s mentality and is determined to put the basket in the hoop no matter who’s guarding him. He also has great length and is always in the passing lanes on defense.

Aside from Bibby, Ratinho may have the best jump shot that I’ve seen this past weekend. Everything is in tact—from the catch, balance and rotation to the follow-through. It looks the same every time and there’s never any wasted movement. Even all his misses looked good. The USF-bound guard has a great feel for the game was very lethal from beyond the arc when he stepped on the floor.

What haven’t you heard and/or seen that you don’t already know about Lonzo Ball? The UCLA commit has garnered more national attention this year in part to his uptempo-style of play. The oldest of the three Ball brothers tends to never disappoint under the bright lights and he really does it all—he’ll pull from five feet behind the 3-point line, throw his signature one-handed full-court pass to one of his teammates, break you down (and help you up after he breaks your ankles: https://vine.co/v/iA1rHOL1Xed) or block your shot on defense. Every game he continues to show why he’s one of the top players in the nation.

Unlike his two other brothers, “Gelo” really likes to play both inside out. If he’s not lighting you up from deep, he’s taking you in the post (preferably the right block) and bodying you up for his patented right-handed hook shot. Although he has that score-first mentality, the middle of the Ball brothers is extremely unselfish.

Aside from older brother Lonzo, Melo is another fan favorite amongst the crowds in most gymnasiums. He’s literally pulling from anywhere if you give him any kind of room. Overplay him and he’s blowing right past you for a layup. One of the things he possesses that may be overlooked is his passing ability. A lot of times defenders are so focused on not letting him score that he’ll drop dimes to wide open teammates down low when he’s penetrating. Melo will also have to fill that point guard void when older brother Lonzo is in Westwood.

O’Bannon played a vital role in the Gaels’ double-digit deficit to cut it to single digits. He’s really aggressive on the offensive end and displayed his ability to score from anywhere on the court.

The McDonald’s All-American showed why he was selected to participate in the prestigious HS game in March. There’s no awkwardness whatsoever in the Gonzaga-bound big mans gait. His movements on both sides of the ball are fluid. He finishes with authority in transition and uses every inch on that frame to his advantage.

If there’s one word that describes T.J. Leaf it’s versatile. The future UCLA Bruin possesses so much in his repertoire. For someone his size, he has a nice handle and can go the distance for the easy lay-in after grabbing a board. He has amazing court vision to see teammates open on the perimeter when defenders attempt to trap the post. He’ll take smaller defenders into the post and can even knock down a few 3-pointers if he’s left open behind the arc.