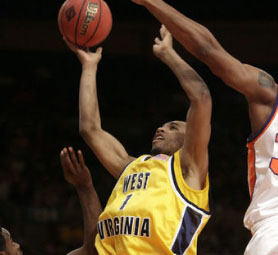 To be honest, I didn’t think West Virginia would be able to handle Clemson after the Tigers took care of Air Force in the semis on Tuesday and the Mountaineers squeaked by Mississippi State on a three-point, fadeaway, buzzer-beater by Darris Nichols, but the Mounties not only held their own in last night’s NIT championship game, they totally dominated and manhandled the Tigers with their aggressive defense.

In the semifinals against Mississippi State the Mounties seemed less determined than they did in the championship game and largely slept through the first half and only came alive with 12 minutes to go in the second when West Virginia stole the ball and Frank Young connected on a three and cut the lead to single digits. Darris Nichols canned a three to cut the lead to one but Dietric Slater, who led the Dawgs with 18 points, held WVU at bay for a bit with a short runner before dialing in from the right corner to put the Dawgs up by three. Nichols came right back with a layup to start the see-saw scoring battle that culminated in three threes from seven footer Jamie Smalligan (the Grant Wahl lookalike that Lang loves, who plays like his name in the paint) and Nichols. With less than a minute left, Smalligan stepped out beyond the three again and got fouled but only made two out of three to put the Mounties up by one. Mississippi State came right back and went up one after Barry Stewart slashed through the lane and hit a runner. When Jamont Gordon got fouled by Da’Sean Butler (the freshman phenom from Newark, NJ was hardly the factor he was in the championship game) it looked like it was a wrap for the Mountaineers but Gordon miss the back end of a one-and-one and West Virginia ran the rebound up court and got two shots at close range that somehow didn’t fall before the ball was batted out of bounds by the Bulldogs. West Virginia took a timeout and set up the play that everybody reading this probably by now has seen. The toss-out went from Ruoff to Nichols, who hit his dramatic shot while practically sitting down on the Bulldogs bench with a defender in his lap.

The game between Clemson and Air Force was nearly a mirror image of the first part of the doubleheader. Clemson went up by 15 with a few minutes left in the first half, led by Cliff Hammonds who made four out of six shots, including three of five three pointers. Trevor Booker and James Mays also shot well and were pivotal to Clemson’s advantage on the boards. Recent mag subject Air Force, like West Virginia, looked flat in the first half and probably would’ve gone into the half down by more than eight if it weren’t for the Falcons three-point shooting. Senior Matt McCraw hit two out of three from beyond the arch and Nick Welch and Tim Anderson also hit one each. Dan Nwaelele didn’t hit any (two attempts) despite the fact that he’s got the range from way out. Vernon Hamilton was pretty impressive for the Tigers as well. He’s not really known for scoring or for dishing out dimes but he had four assists at the end of the half. Conversely, Oak Hill Academy alumnus K.C. Rivers (he led the team in scoring during the regular season) shot horrendously and played like a sophomore with his poor shot selection. He only took five shots and they were all from beyond the arc and he only knocked down one. The second half was a different story though because Rivers got his ish together and finished with 19 points (6 of 11 including 5 of 10 threes and six caroms).

All of the Tigers starters, with the exception of Mays (9 pts, 6 rbds), scored in double figures. Hamilton finished with eleven and had five assists but he also committed five of the Tiger’s eighteen turnovers, which was a factor in Air Force’s surge toward the end. They scored 16 points off turnovers and shot 60 percent from the field. Nick Welch was a big factor. He was perfect from the field. He didn’t miss a single shot (7 of 7 including 2 of 2 from behind the arc)! All of the other senior starters for the Falcons also stepped up their games and made a hard run down the stretch with everyone contributing but in the end they came up short. They should’ve stuck with fouling Hamilton who is an awful free throw shooter even for a point guard. He missed four crucial ones down the stretch that let the Falcons back in the game but instead of fouling him they fouled someone else who shot just as worse. The Tigers shot 41 percent from the line but the Falcons didn’t shoot that much better (43 percent). They almost came back and salvaged what was already a disappointing end to the regular season highlighted by a big loss in conference championship play that was only part of the reason why they weren’t invited to the big dance. Now with all of the seniors gone so goes their chances of ever getting that close again…especially if, as rumored, coach Jeff Bzdelik bolts AFA for the Colorado job.

Since Clemson held on to defeat the tougher opponent in Air Force, I figured they had the advantage over the Mountaineers. I also figured Hamilton and Rivers could consistently break the Mounties’ backcourt down off the dribble like whatever you want since that’s what they pretty much did against the Falcons and the Mountaineers’ backcourt got eaten alive by Mississippi state. WVU coach John Beilein must’ve figured the same thing too because he unleashed a suffocating 1-3-1 shifting zone on the Tigers to slow down their offense in the first half and help propel the Mounties to a 12-point lead in the first half. They forced 11 turnovers and scored 13 points off the Tigers carelessness with the ball. The Mounties also confounded the Tigers by sliding off the zone into a man to man and trapping in the corners. Hamilton, Mays and freshman swingman David Potter all got caught in the trap while their heads were turned and coughed up the ball a few times each.

There’s a rumor that Beilein might be headed to Michigan. If that’s the case then that’ll be a big loss for the Mountaineers because they’re a tremendously talented team with a lot of discipline. They have seven freshman on the squad right now and a couple of them are seasoned vets due to their contributions this year. Particularly Da’Sean Butler. His game is nearly identical to K.C. Rivers. They’re both big fast swingmen with excellent handles who can handle themselves down low and can gun from way outside. Both of them nailed a three in the first quarter. Butler finished with seven for the half and Rivers had nine. Frank Young was killing em crazy though. Nobody had an antidote to the sick shit he was pulling off. In the end when all was said and done he walked away with the MVP trophy (I think there was one) and was a decisive factor in the second half. But the second half belonged to Butler.

He came off the bench five minutes in and went nuts (first he turned the ball over though) with a series of layups and a three pointer. When Clemson tried to clamp down late with a full-court press, Butler and Nichols broke it down and Clemson fell apart. Mainly because Hamilton started hogging the ball and kept it out of the hands of Rivers. Why Clemson went away from him left a lot of people in the press corps scratching and shaking their heads in dismay. Rivers only touched the ball a couple of times at the start of the second half and didn’t score until the four-minute mark with the Tigers down by 16. At that point he went nuts with a layup and one, then turned around a stole the ball. Hammond redeemed himself with a couple of layups before Rivers nailed a couple of threes in the span of a few seconds to bring the deficit down to 10. Then he got another steal and dished it to Mays for a ridiculous reverse cram that left a bad taste in WVU fans’ mouths. But at that point the game was out of reach. Rivers fouled out before 5-9 Chris Poole nailed a three to make the final tally look respectable but the trophy belonged to West Virginia.