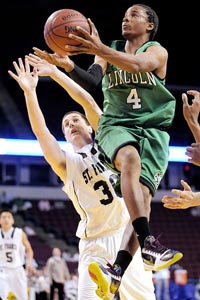 Its a funny thing how rankings work these days. A few years ago when John Wall was a sophomore in high school, even with all of the recruiting services around, Wall was hardly noticed. Last week, Wall was the top player selected in the NBA Draft.

My point is this: Even with all of the rankings that have shaped the basketball world for the past decade, players still fall through the cracks. With the way the game works these days, its probably for the best.

One of the latest players to be uncovered and find himself in a similar frenzy is west coast star Norman Powell, a 6-3 combo guard who combines rare athletic a

bility with a feel for getting to the tin. Schools have hopped onto Powell’s bandwagon from all over the country and he’s open going into the live period.

I got a chance to sit down and talk all things basketball with Norm this past Saturday June 26th as he took in the action at the Adidas Phenom Camp in San Diego.

SLAM: Alright, Norman Powell from Lincoln High School in San Diego is here with SLAM and you’re one of the fastest rising seniors in the country. How did it feel to go unnoticed for so long.
Norman Powell: Shoot, I don’t know. Its crazy, like from where I was an where I’m at right now. It feels good because this is what I wanted but I still feel that like, I’m not rated where I want to be and so it makes me want to work harder to get up there more.

SLAM: Why do you think you were so unnoticed before, what changed in that time period that helped you go from unnoticed to, now you’re noticed?
NP: I think really that people all around, people were saying I was good, that I should be able to go to any school I want. But the steps to like, getting out on the circuit they didn’t take, it was more talk. Then I came to Lincoln with Coach Jeff and Coach Glen and Coach Jason and they all helped together to get me on an AAU basketball team and from there I just, you know, started exploding.

SLAM: And what AAU team do you play with?
NP: Dream Vision.

SLAM: Cool. So how does it feel to finally get the attention that you deserve? You’ve been the same player?
NP: Yea.

SLAM: So you didn’t just change overnight…
NP: You know, I’ve had to humble myself because a lot of people, when they get to your head because they think your all that but its really humbling. I know how to humble myself and take care of it because when it gets to your head that’s where the problem starts.

SLAM: What are you doing in the gym to get to the level that you’re at?
NP: We go in there and well, first I get my music on to get pumped up and all that. Gotta get my mind right. In order to be good you have to have your mind right and ready to practice so basically then I get some shots up, work on defense [defensive slides], probably get up about a 1000 shots probably about three times every week.

SLAM: Definitely working on that shot. Are there any players or teams that you want to play against next year in San Diego, like a rival?
NP: Yea its Lincoln and Morris. We beat them this year but they’re still talking.

SLAM: Who normally wins?
NP: Linoln. We won by one this year but we was up by 35.

SLAM: Wow how’d that play out?
NP: First three quarters they couldn’t handle us, we had fresh legs that we were rotatin’. Then the fourth quarter rolled around and we stopped rotating and they started chipping away and coming back. They had the ball last shot but it didn’t matter.

SLAM: Shows you can’t get humble for a minute…
NP: Yea!

SLAM: How was the NBA Camp?
NP: It was great I liked it, I learned a lot. There was a lot of skill development and NBA players, active and retired ones.

SLAM: Who was your favorite player from the camp?
NP: Jerry Stackhouse.

SLAM: Who is your favorite NBA player now?
NP: Now its Kobe Bryant.

SLAM: Gotcha. So how’s the recruiting going, who’s on you?
NP: Good, colleges are coming from everywhere so I’m liking it. Got offers from UCLA, USC, San Diego State, USD, Arizona, Arizona State, UTEP and Cal.

SLAM: And you just started playing AAU this year?
NP: No last year. I played in July last year and that’s when my name wasn’t out there, but it was like ‘Oh let me look at him, he’s athletic.’ But really my name came out at the last tournament in July. I was playing against Mater Dei and Tyler Lamb. I dunked on Tyler Lamb and that’s when it all kindof happened. ESPN was there and ranked me an 88. Right now I’m a 96. I’m ranked 33rd in the country though.

SLAM: So do you have any favorites?
NP: I mean, like the west coast is good but traveling makes all the other places look great. I would say my favorites right now are San Diego State because Coach has been on me before all this stuff happened, from Day 1. UCLA Coach Scott Garson, he’s funny I like him. Arizona Coach Archie Miller I don’t know if we ever stop emailing each other. James Harden got me interested in Arizona State. Coach Laflour from UConn always has me laughing too.

SLAM: What about back east?
NP: Back east we got UConn.

SLAM: A lot of guard tradition there.
NP: Yea and also Kansas, they were number one so I’m definitely interested in them but I gotta see who’s ahead of me there.

SLAM: You got Josh Selby there right now. What’s gonna factor into your decision, playing time?
NP: Yea exactly. I wanna come in and I wanna play right away. Like not be a John Wall but be in a similar circumstance.

SLAM: John Wall was in a similar circumstance to you. He wasn’t really so known and then he was the number one player. It kindof helped him. You see yourself in that kind of mold?
NP: Yea, hopefully. He’s nasty all around; left hand, right hand, give it to you with the shot, he’ll give it to you going to the bucket in transition, he’ll set up other players so he’s just nice all around and so obviously I hope my skills can come around with dedication to get like his.

SLAM: So you’re hops compare to his?
NP: Just a little bit, he has a little more bounce than me.

SLAM: So who would you compare yourself to in the NBA?
NP: In the NBA? That’s hard! Russell Westbrook, from Cali. He dunked on Lamar Odom and he didn’t dunk until his senior year of high school and look where he is now!

SLAM: Exactly. Do you have a favorite video game?
NP: For X-Box 360 NBA 2K10, Modern Warfare, Grand Theft Auto, I’m on it! I don’t play it that much because I have to balance everything. This summer I’ll take my X-Box 360 on the road though.

SLAM: Aright have fun, great interview thanks a lot.
NP: No problem. 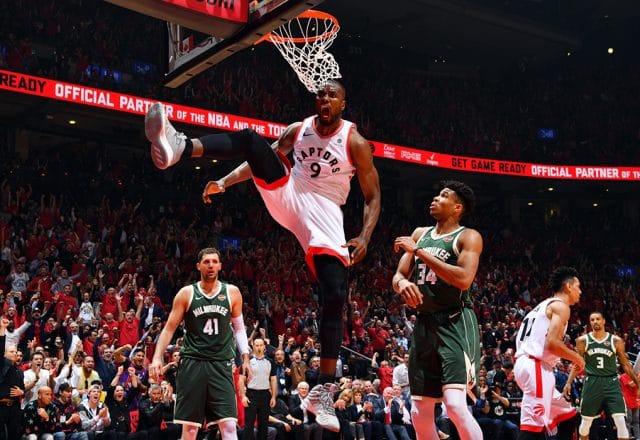 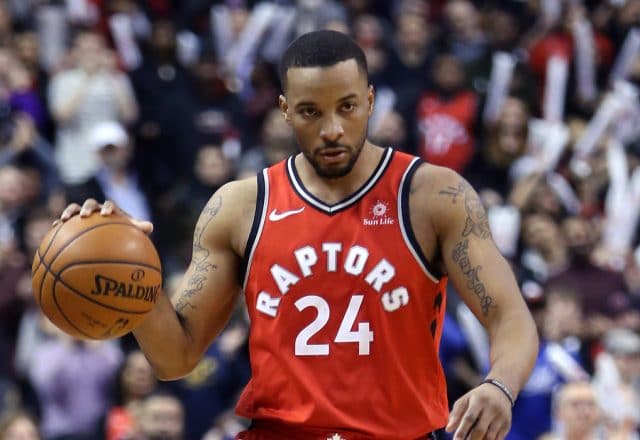