Not Just Another Charity Event 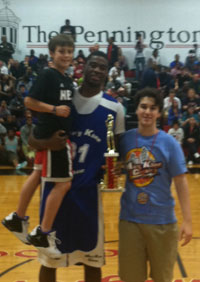 Charity event: By basketball standards, the image that comes to mind is sloppy basketball combined with a ton of selfish play, including seeking the highlight reel dunk and going to get buckets in the hopes of winning an MVP trophy.

Saturday afternoon and evening at the Mary Kline Classic held at the Pennington School in central New Jersey couldn’t have possibly had a more different vibe.

The MKC, founded by the high school recruiting analyst and philanthropist Alex Kline as a result of losing his mother to a brain tumor at the age of 10, was founded on the principles of gathering friends together, having fun and driving donations and publicity for cancer research.

It’s safe to say that in its second year of development, the MKC lived up to its principles in a big way.

“The fact that 100 percent of this is going to cancer research—all $20,000—it just makes everything worthwhile,” stated Kline at the conclusion of his event as players came up to him to share their appreciations for having them. “It was a fun event—everyone enjoys it—but it’s not about playing time or MVP or who’s dunking on who. It’s about the money and the support. Basketball has become such a business these days, so the fact that you can take one night to make it fun is worthwhile.”

It might have been fun, but that all starts with Alex Kline, a 17-year-old kid who has built a following by relentlessly paying attention to the recruiting trail of teenage kids who are trying to earn scholarships to play basketball at the Division I level across the nation.

In case you haven’t heard of him, check out the story that The Wall Street Journal did on him. Or Sports Illustrated. Or The Today Show.

And, most recently, the New York Times, which revealed that Kline has joined Yahoo!’s Rivals.com network as a national recruiting analyst via his site, TheRecruitScoop.Rivals.com, which was formatted to fit Rivals platform on Monday.

How has Kline been capable of creating this much buzz surrounding himself and the cause to donate to the fight against cancer?

Primarily, the high school senior has utilized his keypad efficiently in this new digital era, which has allowed him to live a unique life while bringing people together—college coaches, high school players and die-hard fans—to help a good cause. Kline currently has 22,000+ followers on twitter thanks to his informative recruiting updates.

“I started around freshman or sophomore year,” Kline elaborated. “I thought it was a fun idea to write about basketball and get into players’ lives and see what they’re up to. I never imagined it would turn into this craziness, but the support has been amazing. I’m not a basketball player, nor have I ever been, but the support has been amazing even though I’m different.

“That’s the great thing about this business—you can be different but still fit in.”

Before the game started, Kline had a different idea about how to kick off the festivities. This past winter, the trio of Jessica, Mike and Kyle Ratner lost their father to cancer. Kline encouraged the family to speak at his event, which was highlighted by Jessica (junior in high school) giving an emotional speech (with 9-year-old, third grader Kyle by her side) that truly showed how difficult it is to lose a loved one to cancer.

“It’s people like Alex and people like you,” Jessica preached to the entire gym, tears streaming down her face, “Who donate their time and their money to cancer research, that are going to defeat this disease once and for all.”

With that, the whole gym stood up to give a standing ovation, and the underclassmen game was nearly underway with the rising seniors game following it.

The games weren’t nearly as MVP-driven as they usually are, clearly a product of the event’s budding reputation. 2013 NJ point guard Jaren Sina (Gil St. Bernard, NJ) made creative passes that dazzled the crowd, en route to 14 dimes and a team MVP award. The 6-9 Jermaine Lawrence (Pope John XXIII, NJ) stole the show in the underclassmen game to the tune of 27 points to go along with his teams victory and an MVP award. He was extremely impressive, scoring in every way imaginable, but the most impressive thing he did happened following the game.

With about a minute left in the game, 9-year-old Kyle Ratner checked in, LeBron James jersey on and all. The jersey wasn’t there for show, and Kyle scored two baskets—

including one at the buzzer that caused all of the players to lift him over their heads as if he’d just made a game-winning bucket (the likes of which LBJ has been taunted for not delivering often enough).

With his MVP trophy in hand, Lawrence scooped Ratner up and accepted the award with Kyle in his arms, a truly unique moment at the Mary Kline Classic. “It was a great event,” said Lawrence, who has been on a tear of late and has been rising in scouting discussions often. “It was for a bigger cause—something way bigger than basketball.”

In between games, there was an exciting dunk contest (highlights and game highlights, below), featuring ultra-talented underclassmen Rondae Jefferson (Chester HS, PA) and Wayne Selden (Tilton School, NH), on display, along with a three-point contest.

“It was good to come out here to support the research of cancer and to just have fun,” explained Selden. “I’ve been talking to Alex since early last year about some recruiting stuff and we kind of connected and then he invited me so I couldn’t say no.”

Jared Terrell, another talented player from near Selden (New Hampton Prep, NH), had accepted an invitation to the event despite never having met Kline, once again proving that in this digital era, nothing is too crazy.

“With twitter, if you have the news then people will follow,” explained Kline. “Once people saw me as a reputable person, saw me interviewing future NBA guys, they thought that was really impressive at a young age. The Wall Street Journal caught on, a couple other outlets caught on, and I’ve just been fortunate enough ever since to be doing this.”

Kline is just wrapping up his senior year and is about to head to college at Syracuse University in the fall.

As for his future, he isn’t really sure which door he wants to use his undeniably shining keys to. All he wants to do is something with the game of basketball while impacting lives.

“I’m not exactly sure what my future holds, but I want to make an impact in the world of basketball that lasts a lifetime,” explained Kline. “With this event, high school players are able to give back to the basketball community by doing something they love for an amazing cause that will ultimately impact people’s lives in a positive way. To me, there is nothing more valuable than that.”

Choose wisely, Alex. The basketball world—through any means of media necessary—will be anxiously waiting to see the positive mark you leave on the game as time progresses.