An annual post-season tradition, the top HS seniors in the Big Apple will converge in April for a match-up that will feature the top hoopers from the city public schools against the top ballers from the Catholic league. More info below from NYC & Company:

The NYC Mayor’s Cup Basketball All-Star Games will showcase the best male and female high school seniors from New York City’s Public Schools Athletic League (PSAL) against the best seniors from the Catholic High School Athletic Association (CHSAA) as they compete for the right to call their league the “Best in the City.” The doubleheader, which is the only all-star basketball game played between the leagues, will feature a girls all-star game followed immediately by a boys all-star game. Now in its fifth year, the event has featured 32 NCAA Division I signees, including the last four male NYC Player of the Year recipients.

Event Website
All of the most up-to-date event information, including the official team rosters, can be found at Facebook.com/NYCMayorsCup. The page will also feature post-event box scores, photos and full game videos.

Live Streaming Video
Fans who can’t make it to the event in person can watch live streaming video of both the girls and the boys games at Facebook.com/NYCMayorsCup. 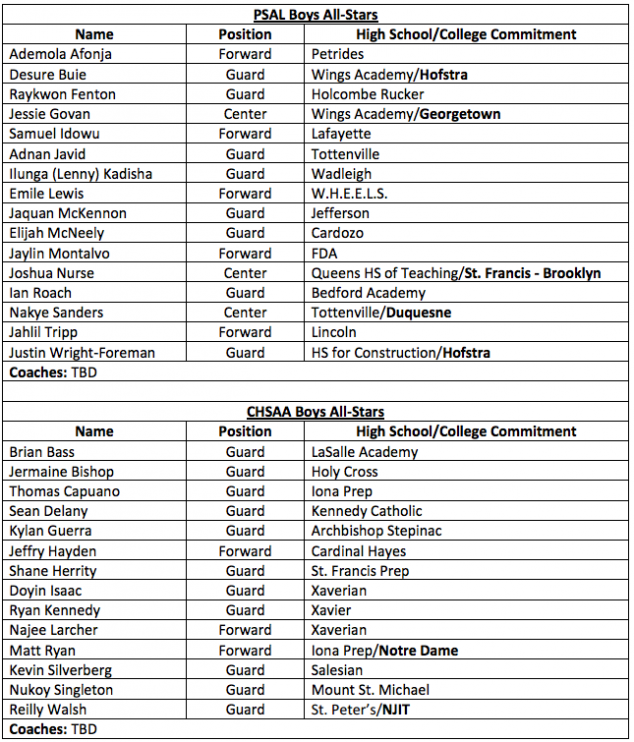