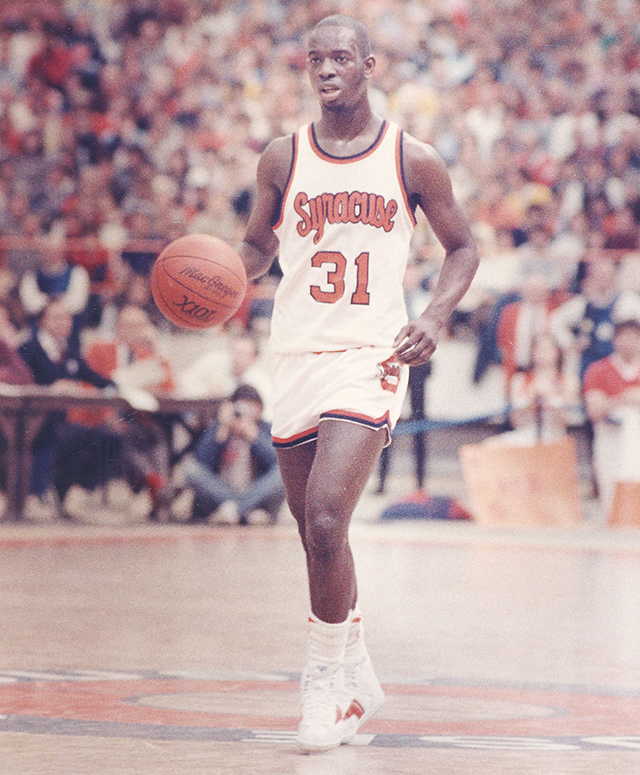 There are some athletes who will always be forever young. They will always be 19, always be dazzling, always, in some ways, be perfect. This is especially true in basketball, where teenage phenoms don’t always see their skills translate to the next level. After the initial disappointment, they gain the unintended benefit of being frozen in time: forever brilliant, forever legendary and, again, forever young. That is why it is shock coupled with sadness to learn that Syracuse great Dwayne “Pearl” Washington was, at the time of this writing, being hospitalized with a brain tumor at the age of 51. I was devastated to hear the news and also did a triple take at the thought of young Pearl being 51 years old.

The historical importance of Pearl Washington cannot be overstated. From the 1951 betting scandals at City College of New York until the creation and rise of the Big East conference three decades later, college basketball had very little purchase in the Northeast of the United States. The same way that today college football just isn’t a “thing” in the Northeast the way it is in the rest of the country, college hoops was just that trophy UCLA won every year. The old glory of the NIT had faded and no one was clamoring to show the independent, mostly football-free, mainly Catholic, private colleges play basketball. This famously changed when Dave Gavitt brought this crew of small schools together, secured a television contract with this fledgling network called ESPN, and turned the Northeast onto college hoops.

Sports historians today give much of the credit to Gavitt along with a crew of colorful coaches like John Thompson, Lou Carnesecca and Rollie Massimino. Future NBA Dream Teamers Patrick Ewing and Chris Mullin also get their deserved due. But none of this, I would argue, happens without Pearl Washington. If Gavitt and ESPN built the motor that drove Big East basketball, Pearl was the gasoline. For the uninitiated, and it is stunning how little video evidence there is of his game, Pearl was “must-see TV” before that was a thing, a dynamic point God with a flair for the dramatic.

He was the No. 1 high school prospect in the nation, Brooklyn born and raised, a product of legendary Boys & Girls High. Pearl was a local legend in the world’s biggest city, his nickname given when he was just 8. In the Howard Housing Project in Brownsville, the older folks would look at his moves, and referencing Black Jesus himself, Earl Monroe, they said, “Who do you think you are, the Pearl?””

Pearl could have gone anywhere, but instead of attending one of the traditional powerhouses like UCLA or Kentucky, he stayed close to home. He was different, bringing Brooklyn to the courts and operating with an instantly iconic “shake and bake” wiggle that left defenders flustered. His young coach, Jim Boeheim—who looked more like an insurance salesman than future Hall of Famer—had the sense to give Pearl the chance to flow and bring that high school dynamism to the court. For much of America, this was a dazzlingly new kind of college hoops. For us in NYC, we were finally seeing our ball on TV. It was thrilling either way. When Pearl hit a half-court buzzer beater against Boston College in January of 1984, it was officially on. Georgetown, led by Ewing, won the NCAA Championship that March, and in 1985 three of the four Final Four teams were from the Big East.

Pearl’s pro career did not blossom, as he averaged 8.6 points a game over just a four-year career. But while his career ended, the love affair that the Northeast had with college basketball had been fully reborn and never ended.

The love affair with Pearl hasn’t ended, either. According to Syracuse’s website, he has been overwhelmed with visitors and #PrayersForPearl was even trending on Twitter. He has spent the intervening years being a kind and giving person. Now people are giving back. So many die cheaply in this world. If we all treasured life and fought to live as hard as Pearl Washington is fighting, our society would be a profoundly better place.

UPDATE: Sadly, Syracuse.com reports that the tumor in Pearl’s brain is malignant. Now, more than ever: #PrayersForPearl.

Pearl Washington to Have Surgery for a Brain Tumor