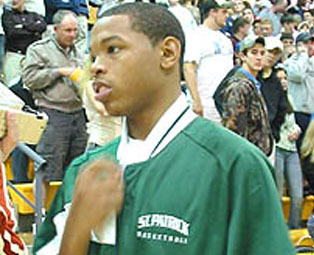 I know, I know. Long time no high school coverage here at School Daze. My apologies. Be prepared for a flurry of posts recapping some of what I’ve seen recently in my home base of Philly, as well as various other prep-related issues. I’m getting ready to head out to the Philly leg of the Primetime Shootout Tour (previous stops were in ATL and Dallas), which takes place this afternoon and evening at Villanova. The tour continues tomorrow and Sunday at its traditional location of Trenton, NJ (they’re calling it the New York/New Jersey stop, but top squads from other places will also be there; check out if you’re in the area), where I’ll be taking notes for a School Daze column on Monday and watching some kids I’ll be writing about for the magazine.
Anyway, here’s a quick preview of some of the event, arguably the top annual high school showcase:

–Neumann-Goretti of South Philly, the top-ranked team in the city, will take on South Jersey’s St. Augustine in the first game at ‘Nova. N-G features Syracuse-bound duo Rick Jackson and Antonio “Scoop” Jardine, a 6-9 post and 6-2 lead guard, respectively. Jackson, a lefty, is a shot-blocking and rebounding machine who can score on the blocks, while Scoop is a high-scoring guard with range on his patented lean-back J and an array of floaters. Neumann also features top-ranked freshman guard Tony Chenault and 6-5 junior Jamal Wilson, a high-rising athlete getting interest from a variety mid to high-major colleges. I haven’t seen St. Augustine recently, but I know they feature 6-8 widebody Eugene Teague, who should be a good counter for Jackson.

–The second game is a matchup between American Christian of the Philly ‘burbs and Linden of North Jersey. Tyreke Evans, rated anywhere in the top five in the junior class depending on what recruiting service you look at, is a 6-5 combo guard who simply put, gets buckets. His supporting cast isn’t bad, with 6-5 NYC native Michael Glover (little brother of ex-St. John’s star Anthony) and 7-0 beanpole Keenan Ellis (most recently of North College Hill in Cincinnati, O.J. Mayo’s old squad) holding it down in the paint. I don’t know much about Linden, but Darryl Lampley, a 5-11 guard I’ve seen in AAU play, is a fierce competitor.

–Next up is Jameer Nelson’s alma mater, Chester, taking on St. Patrick’s, currently the No. 1 team in the country, according to USA Today (I don’t have time to get into a debate about rankings now, but I promise I’ll address it in the future). Chester is led by the aforementioned Nasir Robinson, a 6-5 junior committed to Pitt, and a host of other D1 prospects, including 5-7 junior Karon Burton, 6-6 sophomore Rahlir Jefferson and 6-6 junior Russell Johnson. St. Pat’s features 6-0 ’Nova-bound point guard Corey Fisher, for my money, the best true point guard in the country (I’m not including Derrick Rose, O.J. Mayo or other taller combo guards) and 6-5 monster athlete Jeff Robinson, who’s headed to Memphis, as well as 6-3 Dexter Strickland, one of the top sophomores in the nation . Chester has the speed and athleticism to keep up with St. Pat’s, so this should be a good one.

–The last game of the day is vaunted Oak Hill against Prep Charter of Philly. You know all the usual suspects for the Mighty Warriors by now, but Prep Charter has some talent, most notably the Morris twins, 6-9 Marcus (“Wing Twin”) and 6-10 Markieff (“Big Twin”), who are headed to Memphis after a year of prep school. The twins aren’t your typical tall kids who only play under the basket. Markieff, a big-time intimidator on D and rebounder, easily steps out to 15 feet and even knocks down the occasional trey ball, while Marcus is a legit wing, who is a natural shooter and handles the ball with ease. Both have outstanding court vision and will use that to find PC’s quartet of promising sophomores: 6-1 point guard Parrish Grant, 6-3 combo guard Jesse “Boog” Morgan, 6-7 combo forward Tyree “Chuck” Harris and 6-6 post man Ferguson Myrick.

For right now, I’ll save you a long preview of the weekend games in Trenton, but I’ll be back later with much more from the Primetime and other high school updates. Like I said, if you’re into high school ball or just curious about some of the players Dicky V. and co. will be raving about in the coming years, get out to the Primetime.