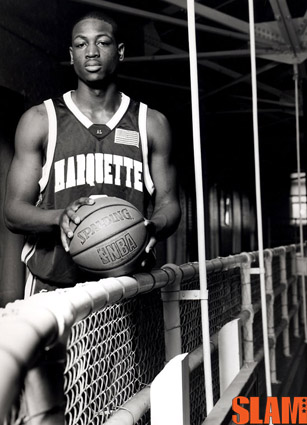 With college basketball season tipping off this week, we’ll be running a number of previously published features that documented a current NBA star during his NCAA come-up. We’ve already posted a Q+A with then Cal sophomore Jason Kidd and a Lamar Odom piece written right before he suited up for the University of Rhode Island, and now we have a profile of Dwyane Wade penned while the 6-5 guard was tearing it up for Marquette University. This was originally printed in SLAM 71.—Ed.

It’s the middle of the day in the middle of the week in the middle of the country, and Dwyane Wade is walking through Marquette University’s downtown Milwaukee campus with the placid demeanor of someone who’s very comfortable in his surroundings. Wade is listed at 6-5, 210 pounds, but he seems smaller right now, with a black adidas sweatsuit engulfing him and his quiet voice shrinking him further. As Wade ambles along, waving shyly at the handful of smiling students and honking cars that acknowledge his presence, he states his current mission: “I’m hungry, man. I gotta get some lunch.”

With that, the Dwyane Wade Show rolls into the student union and right to the cafeteria. After exchanging small talk with the food staff, Wade picks up his grub, pays the cashier and sits smack in the middle of the cafeteria, confident that people will continue to let him be, if they notice him at all. You would never, ever, guess that Wade is about to make public a decision that will change his life forever. “All the questions were just getting to be too much,” Wade begins. “I mean, the reporters was one thing, but now I got people on campus asking me, even teachers. Really, teachers are stopping class to ask me if I’m turning pro. Once it got to that point I was like, I’ve got to make this announcement.”

The “too many questions” situation doesn’t quite equate with the privacy he’s being given at this very moment, but Wade makes it clear that any attention can sometimes be too much. Dude is just low-key like that, and if he’s going to get animated about something, the subject is a lot more likely to be his pretty wife (high school sweetheart Siohvaughn), their adorable son (15-month-old Zaire) or his GPA (on the brink of a 3.0 for the semester) than the attention and riches that his game (explosive and NBA-ready) will soon bring him.

One reason the 21-year-old guard—a first-team All-American who averaged 21.5 points, 6.3 rebounds, 4.4 assists and 2.2 steals per, leading a resurgent Marquette program to a 27-6 record and a berth in the Final Four—is so unassuming is because such a future was never expected of him. Growing up in the gritty suburbs that serve as an extension to the south side of Chicago, Wade balled, but not precociously. “My father is mostly the one that taught me and my brothers how to play,” recalls Wade, his brotha-from-the-Chi accent smoothing over his words. “He’d gone to Simeon [HS] in Chicago and played every sport. He loved the game of basketball and he wanted us to be able to feel the same enjoyment. I didn’t like it at first, but it grew on me. I got serious about it in the early ’90s, seeing Chris Webber and the Fab Five. I had played before, but when they came out with their baggy shorts and all that, that’s when I really wanted to play.”

Dwyane didn’t have to go far to get his game on. “We had a rim in our backyard with paved concrete and grass and dirt off to the side,” he continues with a smile. “Everyone would come over and play. Right now the backyard seems real small, but back then it seemed big. Sometimes people would be there when we woke up, playing in the backyard. We’d play three-on-three, or 21, every man for himself. That’s where you really get better, at least at one-on-one moves.”

With little fanfare, Wade took his moves to Richards High in Oak Lawn, a school known more for football than basketball, but that did serve as home to Wade’s talented stepbrother, Demetris McDaniel. “My older brother was the man at Richards, and that made me want to go there,” says Wade. As Wade’s coach at Richards, Jack Fitzgerald, says, “to be honest, Dwyane wasn’t really a full-time varsity player until his junior year. When he was a sophomore we had a great team and his stepbrother—who finished up as the leading scorer in school history, and still is—was the star. Plus, Dwyane was a little kid then. Demetris would bring him to practice, and he was a scrappy kid that liked to play, but he was small. He grew in the summer going into his junior year about four inches and just came onto the scene like gangbusters.”

Wade began his junior year of high school by quitting his fall job as a cornerback/wide receiver. “I love football,” Wade says. “I’ll watch the NFL before I watch any NBA, and playing was one of the most fun things in my life, but my coach asked me to stop and I agreed.” Sacrifice made, he got down to business on the court. Wade averaged 21 points and 8 boards per as a junior, and Fitzgerald leaned on him heavily. “His thing in high school was that he was a ferocious offensive rebounder,” the coach recalls. “So I generally liked to play him as close to the basket as possible. But our main rival, a school called Hillcrest, ran this 1-3-1 press that our guards could not break. So I had Dwyane run the point and he did the job. It wasn’t enough to beat them, though, because Dwyane couldn’t pass to Dwyane.”

Dwyane’s stats and overall play finally started to earn him some recognition. “Before the summer after my junior year, I’d never played AAU ball,” he remembers. “Then the Illinois Warriors asked me to play.”

Balling with a Nike-dipped, Land of Lincoln dream team that included Darius Miles, TJ Cummings (UCLA), Matt Lottich (Stanford), and Todd Townsend (also at Marquette), Wade began to display his gifts to a wider audience. He also started to attract some colleges, but few were as devoted to him as Marquette, which was the rare school that had noticed him as a junior. Marquette brought in a new coaching staff that summer, and head coach Tom Crean and assistant Tim Buckley picked up where the previous staff had left off—showing legit interest in the lithe two guard from the south side. Marquette wisely maintained its interest even when it became probable that Dwyane wouldn’t qualify academically as a freshman. “That summer I played AAU, my recruitment picked up. I did get a lot of letters from a lot of schools, but they were just letters,” Wade says. “Once it came down to offering me a scholarship, a lot of schools just fell off. They’d seen I didn’t have the grades or felt I wasn’t the player they wanted. But with Marquette, I was the only shooting guard they recruited, and that made me feel good. That’s why I committed before my senior season. I didn’t want a lot of schools to jump on the bandwagon.”

The bandwagon stayed pretty empty even as Wade averaged 27 and 11 for a 24-5 Richards team. Wade was not invited to any of the national high school all-star games (though he did play in the Wendy’s NY-Chicago game) and he finished seventh in the state’s Mr. Basketball voting. “I can’t even remember the names of all the guys ahead of me. I know Darius won, and Eddy Curry, Lottich and Cedric Banks, who plays at UIC, were ahead of me. The thing was, I felt like my coach did a great job even getting me that many votes—it’s like I didn’t even get covered in my local newspaper.”