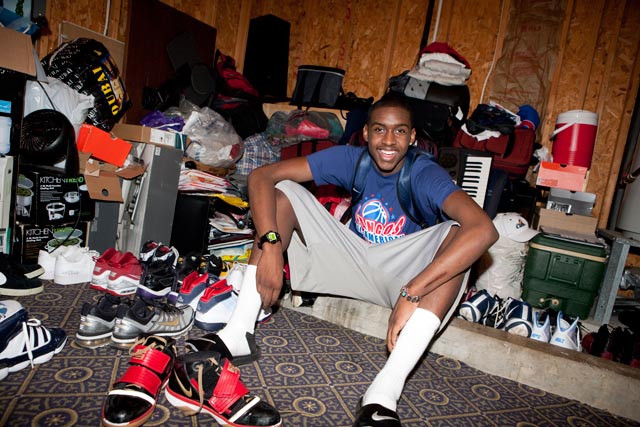 Following in the footsteps of guys like LeBron James, Kevin Love, Tyreke Evans and Harrison Barnes, high-scoring forward Quincy Miller of Westchester (NC) Country Day is SLAM’s ’10-11 Basketball Diary keeper. Check him out in the new issue of SLAM, on his personal Twitter feed, and of course, right here at SLAMonline.com. For the next 12 months, this spot is his. Do your thing, Q…

Wassup? I’m out in Las Vegas right now, working out a little bit — they got some pros out right here now, so it’s a great opportunity. Then we got the adidas Super 64 out here next week, so I’ll be running with my D-One Sports crew. I’m looking forward to it.

The summer’s been good so far. We were out in Indy last week for the adidas Invitational, which was alright. We actually went 1-3, but it was a good challenge for me. I was getting double-teamed a lot, so I had to do other things instead of scoring — I had to rebound, pass, play defense, block shots, everything [Q still got some highlights, though—Ed.]. It was frustrating at times offensively, but it was fun seeing what I could do. I’m not the type of kid to let it bother me, anyway.

Before that, I was out in San Antonio with USA Basketball for the FIBA Americas U18 championships. That was one of the greatest experienced I’ve ever had. To have a group of 12 players, every one of them going Division 1, most of them one-and-done supposedly — it was just great competing with them every day, twice a day in practice. Plus getting coached by Coach Capel from Oklahoma, Coach Hewitt from Georgia Tech, and Coach Witherspoon from Buffalo, it felt just like a college atmosphere. It was intense — we always had to go hard.

I was impressed with a lot of my guys out there. Patric Young was the hardest worker, I can’t even lie. I think Austin Rivers was the best pure scorer, and of course Kyrie Irving is the best point guard I’ve ever played with. Oh, and I gotta mention Vander Blue, he played the best defense out of all of us.

For me personally, I feel like I played great. I was the second-leading scorer and leading rebounder, plus I hit the game-winner for us to win the gold medal against Brazil. My last shot before that was an airball, but then I hit a three from the corner to win it. That was my career highlight, by far. This was my first experience with USA Basketball, and I definitely want to come back. My mentality going in was just to get better and see what that college atmosphere is like, and that’s what I did.

Oh, and college? Yeah, I know you’re wondering. I probably got about 10 schools right now, and honestly, it’s still wide open. All my schools are even. I don’t really even have a time table. I’m having a little fun with it, though — sometimes I tweet about the different schools I’m looking at, just to keep people guessing. And you know there’s always that behind-the-scene thing with different guys trying to talk each other into going to the same school. But like I said, it’s wide open. Stay tuned.

What else? I gotta shout out my mom, Aniesha Scott, all my family, and everybody at D-One Sports, Quality Education and Westchester — especially my man Deuce Bello. Oh, and shout out to Kevin Durant, the best player in the League right now! Alright, that’s it for now. They got my diary in the magazine, too, with a little more information about me, so make sure you check that out too. I got a lot going on the rest of this summer, so check back and I’ll let you know how it goes.