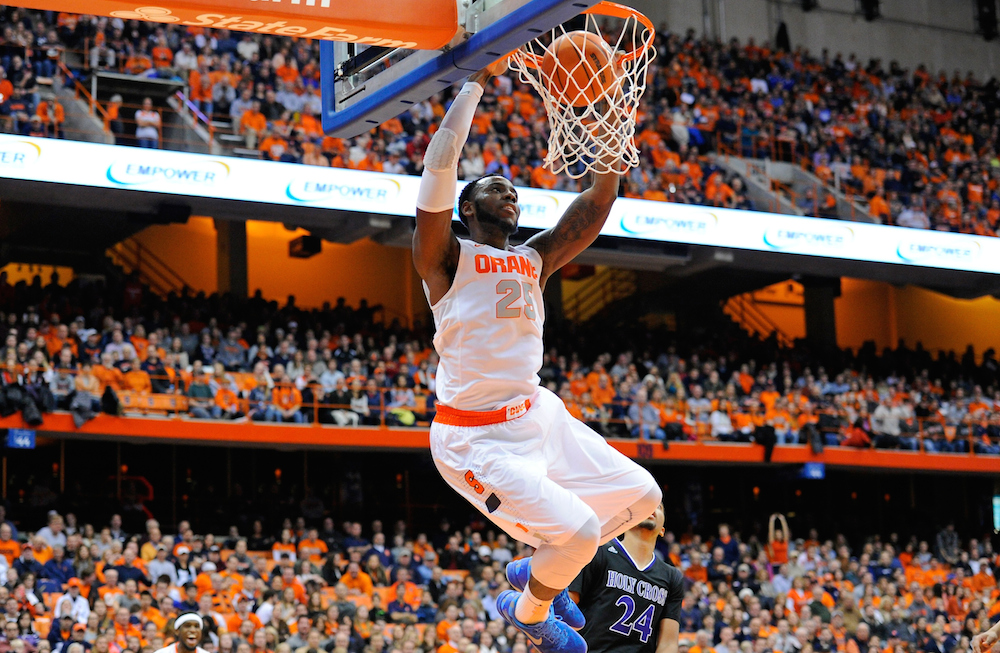 The ACC rules the NCAA Tournament this year. No conference has more teams in this year’s Sweet 16, as five squads from the ACC—Duke, Louisville, NC State, North Carolina and Notre Dame—have earned a spot in this year’s regional semifinals. One person who has a unique perspective on what this means is former Syracuse big man Rakeem Christmas. The Philadelphia native and All-ACC first-team selection tore up the five aforementioned squads, as he averaged 17 points, 9.2 rebounds and 3 blocks in six games against those teams.

Christmas took a few minutes to talk with us about the Tournament, who he has winning it all (hint: it’s not an ACC team), Jim Boeheim’s legacy at Syracuse and his upcoming pro career.

SLAM: Which team is going to win the NCAA Tournament?

Rakeem Christmas: I think Kentucky is.

SLAM: You’ve played against five of these teams, correct? I have it down as Duke, North Carolina, NC State, Notre Dame and Louisville.

SLAM: If you had to power rank those five teams what would that look like?

SLAM: What is it that makes Duke so good?

SLAM: You had to guard [Duke center] Jahlil Okafor earlier this year. Would you say that he is the best player in college basketball?

RC: Yeah. He knows how to use his body, he knows where he needs to get and he knows all the things he’s good at and what he’s not good at. So he keeps doing what he’s good at and it’s working for him so far. He’s having a hell of a year this year. He’s a very good player.

SLAM: Yeah you guys did a really good job against him and he still had a pretty good game. He’s just that talented of a guy.

RC: He just uses his body, he knows where he needs to get and he gets there and he gets the ball. He takes his time and he tries to finish it, and he’s good at finishing around the rim.

SLAM: How many of the teams that you have played against do you think eventually can make it to the Final Four?

RC: Duke and Notre Dame can get there. It’s March Madness, it’s just about runs and a lot of people are making runs. NC State, I didn’t think they were gonna get this far. They’re playing hard and they’re winning games so I guess it’s about runs. You never know what’s gonna happen.

SLAM: You said Kentucky is the team to beat. What is it about Kentucky that makes them so good, in your eyes?

SLAM: Let’s really quickly talk about Syracuse. It was announced that Coach Boeheim is going to retire in three years. Did you have any indication that he planned on doing that?

RC: I had no idea. I know coach Boeheim loves coaching and that’s what he’s good at, so I had no idea this was happening. It wasn’t like he was gonna tell us.

SLAM: What did he mean both to you and to Syracuse hoops?

RC: He means a lot to Syracuse. He’s been around for years and he’s one of the best to coaches out there. He knows how to get players ready, that’s what he did for me. I didn’t know exactly what I was doing and he had to coach me up to this year and I figured I’d listen now. He does a great job with his players and getting them ready for after college, and I’m thankful I lived there.

SLAM: Yeah, I used to live Upstate and Boeheim is like a God up there.

SLAM: The next thing on the horizon for you is playing pro ball. How are you getting ready for the NBA Draft?

RC: Just been going out here and getting a lot of jump shots up. That’s something I’m going to have to show scouts this year is that I can hit a jump shot. Just go out there, give it my all and just try to carry over what I did at Syracuse—getting rebounds, blocking shots, making plays and just giving it my all.

SLAM: How would you describe your game? As a guy who even if you’re not going to get buckets you’re going to find other ways to make an impact on the floor?

RC: Yeah. If I’m not scoring I’m trying to get rebounds, trying to block shots. Just try to give my teammates a little and make some plays. I’m really just the kind of person who wants to go out there and help my team win.

SLAM: Have you heard any evaluations from scouts or anything like that on where you’re going to get picked?

RC: I have no idea, I haven’t talked to them about that. Like I said, right now I’m just trying to focus on working on hitting that jump shot from the free throw line and getting ready for the Draft process.

SLAM: Last question, if you had to pick a team to play for in the NBA, where would you most want to play? I know you’re from Philly, are the Sixers maybe a team you wanna head to?

RC: I’ll play anywhere. Anyone that wants me to come for them, like I said, I just want to go out there, have fun and play the game that I love. Anywhere would be a good choice for me.