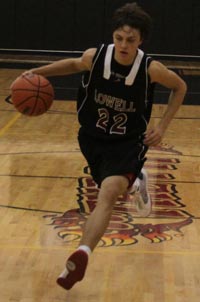 March Madness earns its moniker one way or another every season. Storylines range from high-profile programs adding to their dynasties to folk heroes from smaller schools leading their team on deep runs in the Tournament.

Lowell (IN) HS senior Austin Richie plans on being part of the latter.

The 6-2 combo guard, with shooting range and a release that has to been seen to be believed, averaged 28.8 points per game

as a junior and parlayed a successful run on the club circuit this past summer — that included a 35-foot buzzer beater to give his team a tournament championship — into over 10 Division I offers.

Prior to May he held offers from Valpo and IUPUI. Now he has his choice of Western Michigan, Drake, Loyola Chicago, Bucknell, Holy Cross, Appalachian State, UTEP, Louisiana Tech, TCU and Portland among several others to add to his original two suitors.

“Growing up playing basketball, you always dream of achieving certain goals,” said Richie, who is the state of Indiana’s returning leading scorer. “After I go play for a Division I program, the next goal is playing in the Tournament. I don’t know why anyone else would really want to play college basketball if you don’t get to play in the Tournament.”

While Richie spent most of this summer playing with the northwest Indiana-based CAPS All Stars, he played in Nike’s Elite Youth Basketball League with Chicago based powerhouse Meanstreets. Besides playing alongside Anthony Davis, a player who went from unknown – to a consensus top-10 player in the country – to Kentucky commit in a span of three months, Richie got a sneak preview of what’s to come.

“I loved playing with them,” Richie said. “I thought it was a good experience just for the fact that it was a college basketball feel. I was playing with 10 other Division I players. They were a talented group. It was real good test playing in the EYBL because I thought it showed myself where I was at physically and basketball wise. The biggest thing is just the strength part of it. As I get stronger, my game will take another step also.”

“He’s a very dynamic scorer,” said Jackson, who is now at IMG Academy in Florida. “He can play on and off the ball. He really has a knack for putting the ball in the basket, but just has to work on getting stronger.”

“He has to get stronger and continue working on his ball skills because he’s only about 6-1 or 6-2. I know he’s scored a lot in high school, but when he competed with us against the upper echelon teams he had a little difficulty getting free and open.”

When a player has the range on his shot, and a variety of pull-ups and floaters that Richie has – it’s not natural. It is worked for. His crazed competitiveness and tireless work-ethic aren’t mutually exclusive. The progression between his sophomore, where he led the state in free-throw shooting at 95 percent, and junior year in high school is evidence.

“Personally, I think it’s night and day from my sophomore season to junior season,” Richie said. “I’ve been building some strength, speed and agility. I’ve been working out with my trainer for about a year and half now, and he’s got me doing some good stuff. So, I think this year it will be the same thing with more improvement.”

With hopes of figuring out his college destination by November, location, student body and some of the other things some recruits look for aren’t really on Richie’s priority list. He is very specific why he’s considering the several programs that are on him.

“Those schools are the ones that offer what I’m looking for,” Richie said. “The coaching stability, the relationship with the staff, the style of play and my role that I’m going to play in their style, if I can play in the Tournament – to me those are the most important things. That’s just how it goes.”

If for some reason he chooses to hold off on his decision until the spring signing period, his opposition shouldn’t assume he will be playing with college on the back of his mind.

“I don’t think I’m going to play with any other mindset besides, I want to win.” Richie said. “That’s how I step on the court every time: What can I do to put my team in the best position to win?”

Once he gets to college, he plans on doing the same thing he’s done his entire basketball career.

“I expect to make an impact wherever I go,” Richie said. “I think a lot of schools that have been recruiting me see the same thing. Especially with my work ethic, as I get stronger and faster, it will only take my game to the next level.”

“I’ve always believed in myself being just as good anyone I step on the floor with. I think that’s the only approach you can take to the game.”