Road to the Final Four: Just Say Noah to UCLA 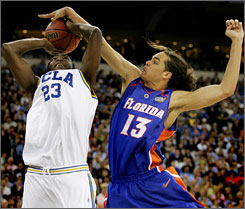 That number is completely made up. It could – and should — be argued that, even if this is a pretty good estimate of how many people loathe the 6-11 Florida forward, an article shouldn’t be led off with something that so blatantly skirts the truth.

Then again, some national voices have written columns over the last few days, namely ESPN’s Pat Forde, that label Noah as a victim and avoid the truth the whole time. These are the back-of-your-head thoughts that, when you watch Gator basketball or read over the articles about Noah, are brought obnoxiously to the forefront.

Real tough life you live, Joakim. The fact that you have to be responsible for anything at all may be new to you. That decision to return to Florida last year must have been a tough choice, sitting on a pro tennis star career’s worth of inheritance.

And, yes, Joakim, if you don’t have this amount of points, this amount of rebounds and this amount of blocks, it is, in fact, your fault. These are three of the fundamentals of basketball statistical categories. You will be criticized if you do not produce them as a National Champion Division 1 basketball player.

And there are days where you simply didn’t. Florida limped out of the gate, it should be remembered, losing to the first two big conference schools it played (Kansas and Florida State) this season. And in the Gators’ midseason lull, where they dropped three of four to Vanderbilt, LSU and Tennessee, Noah dipped even further. In a six-game stretch, the junior averaged 8.3 points per game, including 4 points in 21 minutes in that LSU loss.

Al Horford, too, sympathized with all of the “expectations on (Noah’s) shoulders” to Forde. But Horford, the bedrock of this team and the model of consistency down the stretch, was robbed of a second-team All-American slot en lieu of the face of the 2006 Championship Team.

Want to know why that is, Joakim? Because the media likes your game. I like your game, even. It’s hard to tell from the 400 or so words above and from the restraining order I’ll be faxed tomorrow, but we get you.

You’re young. You don’t see the point of trivial midseason games that would lock up a number-one seed. The LSU game is not a championship rematch to you, it’s another game. Against Kansas, a game that you knew would be an elite test, you even tipped home a game-tying layup despite the overtime loss.

But if you lose or if you don’t turn on the switch and we don’t see that almost maniacal intensity, expect to see plenty of complaints about how many points you got.

Sixty-seven percent of people in America actually like you, Joakim Noah. As long as you see that each of those points and blocks and rebounds matters.