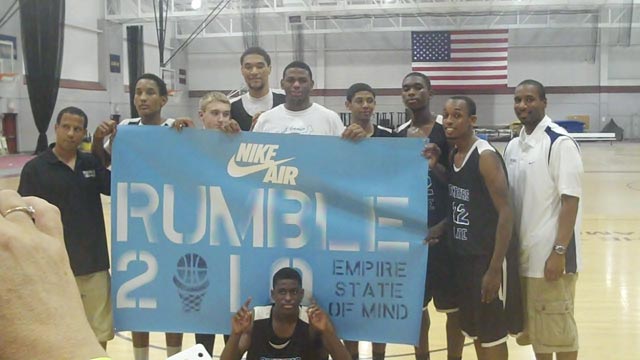 Every year on the second weekend in June, the Rumble in the Bronx attracts some of the top AAU Basketball teams from all around the country to the heart of New York City and this year was no different.

The annual tournament is hosted by the City Rocks AAU organization, which is based in Albany, NY and they did a fantastic job of running the event from start to finish. It all began at the top with director Jim Hart, who had a vision of the tournament long before it began in 1999.

Some of these teams in

cluded South Florida Elite, Garner Road (NC), Team Missouri, BABC (MA), Team Melo (MD), Rhode Island Breakers, Pennsylvania Playaz, Hammond Canes (IN), Arizona Golden Gators and the Dallas Mustangs, to name a few. That list doesn’t even mention that most of the top teams in the tri-state area came to compete this past weekend at Fordham University, Manhattan College and a few other local gymnasiums.

Recently the tournament has been popular enough that Hart has had to turn some teams away.

“I limited the amount of 17U teams to 48 because we want to keep the competition elite,” says Hart.

The Rumble in the Bronx is also unique in that they have “outdoor concession stands, music and an atmosphere,” according to Hart. Rappers such as Jay-Z, Fat Joe and Michael Rapaport have been spotted at the event in the past along with superstars like Allen Iverson and Rafer Alston, who coaches with the New York Panthers. Even Boston Celtics GM Danny Ainge was spotted on Saturday at Manhattan College watching his son play, just a day before Game 5 of the NBA Finals.

As pool play came to a close late Saturday night, the Playoffs began to heat up the action early Sunday morning with each team battling for their ultimate goal of a championship.

In the 17U division both of the semi-finals included teams from New York (NY Panthers and New Heights) but neither of them could outlast their opponents to reach the finals, where East Coast Elite and Connecticut Basketball Club fought for the ‘chip.

CBC 6-7 guard Tavon Allen (Worcester Academy ‘11) came out firing on all cylinders to take an early lead on their counterparts. They looked to be golden after watching Elite lost Pittsburgh-bound prospect Jaylen Bond to an ankle injury. That wasn’t the case, however, as 6-2 shooting guard AJ English (Appoquinimink HS, DE ‘11) brought Elite back with 14 points (3 treys) to keep the game within striking distance 32-29 at the half.

In the second half highly touted CBC 6-11 monster Andre Drummond (St. Thomas More ’12) came alive in the lane but Elite’s own 6-11 Malcolm Gilbert (Academy of the New Church ‘11) play

ed solid defense in the middle and held Drummond in check for the most part, blocking him 5 times in the process.

AJ English continued his hot shooting to lead his team to the winners circle by scoring 28 points and earning MVP honors.

Other Rumble in the Bronx champions were: