Russ Smith Is At It Again 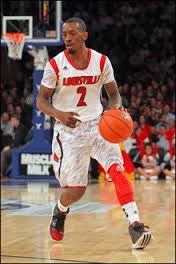 On Tuesday, the Cardinals will visit President Obama and the White House to celebrate their newest banner.

Russ Smith won’t be there, either.

Instead, Smith, who led the Louisville title team in scoring during the ’12-13 regular season, is with a team of collegiate players from across the nation in Estonia. He’ll be joining DIII Lycoming head coach Guy Rancourt and 11 other college players on the East Coast All-Stars to rep the red, white and blue in this week’s Four Nations Cup.

“Man, I don’t even know. I don’t even know what to expect to be for real,” Smith said of this upcoming FIBA challenge. “But what I can say is that we’re going to play hard and try our best to win some games.”

For Smith, the ECA’s two-day training camp at Fordham University last weekend was his first organized game action outside of a Dyckman run on Saturday. Outside of training individually, the guard with a “Russdiculous” moniker, is still riding Louisville’s title wave.

“It’s been pretty crazy in the state,” Smith says of Kentucky’s post-Championship reaction. “Then I came home for a bit, spent some time home here [in New York]. I got a lot of love here as well, so it’s been really good.”

He has all the reason to step back and embrace his success. Smith’s career could arguably be considered one of the most decorated of all active players’ in the nation. You could say his trophy case is overflowing with hardware.

Since joining Rick Pitino in Louisville in 2010, Smith has played integral roles on Cardinals teams that have won a National Championship, made two Final Four appearances and won the Big East Tournament twice while earning a 90-25 record.

Yet despite all of his success, Smith, a soft-spoken and down-to-earth kid, is often considered a knucklehead and a detriment on the court.

“I don’t really mind it. Sometimes it brings a negative perception,” Smith says of his nickname and wavering on-court perception. “But I just play basketball and I’m a winner. At the end of the day there are guys with names like Mr. Fundamental, but they don’t have two-straight Final Fours and a National Championship. I have rings, man.”

After winning said ring and averaging 18.7 points per game last season, Smith was considered a shoo-in to enter his name into the 2013 NBA Draft. Yet the enigmatic Cardinal decided to return for his senior season.

“After last season, with the year I had, one would think I should be in the League or I should be a first-round pick,” Smith says. “But I don’t get into that. This is an opportunity for me to get better, fix some of those wrinkles in my game that need to be ironed,” he explains, both of returning to school and joining the ECAs. “I’m not here to get to the NBA or prove something to anybody. I know I can play at the next level. This is about getting the wrinkles out of my game.”

In order to smooth out some of the rough edges of his game, Smith is doing things like bypassing the nation’s capital for a small town in Europe. He’s looking forward to using the opportunity to improve his decision making, clock and time management and shot selection—which he calls his “biggest hurdle.”

“Just getting better fundamentally,” Smith says of his goal to improve. “With the reputation of overseas guys, I have to play really solid and I can’t make any mistakes. Offensively and defensively, we just gotta take it one possession at a time. I wanna get guys involved and get guys the ball and just become a smarter player.”

This trip to Estonia will also allow his to receive valuable minutes running the team as the starting point guard, a role Peyton Siva held under Pitino for the last four years. That could be a task Smith is asked to handle next fall.

“I feel like it’s [going to be a challenge] running a team,” Smith says of his new position for the Cup. “It’s not so much playing the one but running the team and making the right decisions the whole game. I think that’s the biggest challenge.”

The electric scorer also said that he doesn’t know exactly what position he’ll play for Pitino next season, but did say that he and his coach have been in close contact about this ensuing campaign—a season that will carry enormous expectations on campus.

The defending champs will be returning three starters in Smith, Chane Behanan and Wayne Blackshear. The Cards will also have super role players Luke Hancock and Montrezl Harrell as well. Add in a typical stellar recruiting class and you have team ready to wreak havoc during the inaugural American Athletic Conference season.

“We have a very good chance to repeat, a very good chance to,” Smith says of his team. “But it’s not talent or even depth that gets you into the Final Four. It’s how well you are as a team mentally and how well prepared you are from a scouting standpoint. Coach P is great at preparation, man. There’s some ridiculous stat that he’s like undefeated in Sweet 16s or has just one loss in the Elite Eight. It’s ridiculous. Coach P prepares really well.”

Maybe Coach P will have to get some new body art next April.

“I think he’s done,” Smith laughed. “I don’t think he wants to make any more deals with us.”

After a likely productive week in Estonia, Smith may find himself laughing yet again. Following a week of fine-tuning his game, he’ll likely be the one chuckling at those who ridiculed him for ditching the festivities in DC. And when the basketball world drops everything to tune in during March, Smith will be probably be there, too.

Photo (right) by An Rong Xu