Sayonara to the Sunshine State 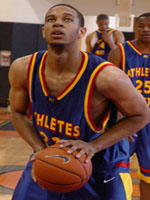 While I’m not sad to be back in the N.O. (driving around Orlando isn’t what I consider fun; the airport is even worse), I must say the AAU Boys Basketball Super Showcase (and what I saw of Nationals) is some of the best ball I’ve seen all summer. Whether that’s a testament to me not being on the East Coast, the overall level of talent being down or a higher quality of ball in Orlando, I don’t know–but I was thoroughly entertained (mostly) by the event(s) and got to see a lot of players I’d either not seen in a while or only heard about. What stuck out to me the most was the team dynamic; as much as people talk about the individual aspect of AAU (I probably don’t help by writing about individual players, but it’s not like casual readers want to hear about the summer success of the Gauchos, DC Assault, Team Breakdown, etc.), winning games attracts college coaches. I’ve seen multiple kids get looks from schools based on their team’s success, whereas more talented players (not the superstars, come on now) might get overlooked because their team loses early in the tourney. While powerhouse squads like Team Final, BABC, New York Gauchos, All Ohio Red (16-and-under champs) and 17-and-under Super Showcase Gold Division champs Athletes First held it down (and got plenty of love from coaches), I have to give a shout out to teams like Birmingham Ice and Illinois Warriors, who overcame a (supposed) lack of talent to make major noise. Of course, continued excellence breeds consistent exposure, which brings sponsorship money, which brings in top players and so on and so on. Thanks again to James Parker from AAU and Marques Edge from Disney for hooking things up. Here’s my last installment of evaluations from Orlando, featuring 10 kids who left strong impressions on me:

Tucker Halpern, 6-8 combo forward, 2009: Halpern, a product of the New England prep ranks, was solid all-around, with his combination of shooting, athleticism, ball skills, touch around the basket and willingness to mix it up inside.

Gregoryshawn Magee, 6-9 post, 2009: A skinny lefty with a nice touch out to 15 feet and great agility for his size, Magee’s game is still a work in progress, but his eye-catching athleticism and shot-blocking ability had the sleeper opening a lot of coaches’ eyes.

Keith Gallon, 6-9 post, 2009: “Tiny” could still use some conditioning work, but his guard-like quickness, ballhandling and passing, ability to utilize his wide frame in the post and on the boards, soft touch and solid athleticism make the Tractor Traylor (think the Michigan version) clone near-unstoppable when motivated.

Tommy Mason-Griffin, 5-11 point guard, 2009: The recent Oklahoma commit has shed some weight from his formerly-chubby body and it shows, as he looked a lot quicker on his dynamic dribble moves and springier on his frequently on-target deep jumpers, something the Houston native will need to pick up the mantle as the next Oak Hill floor general.

Pe’Shon Howard, 6-2 combo guard, 2010: Speaking of Oak Hill guards, Howard continues to show improvement, as he is also noticeably quicker–which, in turn, makes him better at creating his own shot, setting up teammates, staying in front of point guards on D and finishing at the bucket, as well as knocking down the trey ball.

Xavier Henry, 6-7 wing, 2009: The newest SLAM diarist got buckets at will in Orlando and while I wish the outrageously-talented lefty didn’t take so many degree-of-difficulty shots, it’s hard to argue with the results (his team won the chip), as the 230-pound (at least; no way he’s still at his listed 215) monster scored in the post, on the break, from deep and going to the rack.

Daniel Orton, 6-10 post, 2009: Orton has always looked the part of a high-major player, but the flashes of potential are starting to turn into production, as the strong and athletic Oklahoma native’s rebounding, shotblocking and finishing ability kept improving as the games went on.

Drew Crawford, 6-5 wing, 2009: One of the underrated prospects on the tough Illinois Warriors squad, Crawford–who I heard is a 4.0 student–displayed a versatile game, including a pure jumper from beyond the arc, tough rebounding and D, strong finishing at the rack and a knack for always being in the right place at the right time.

Ramon Galloway, 6-3 combo guard, 2009: Since I knew “Mony,” a Florida resident via Philly, as an eighth through 10th-grader, it’s great to see he has kept his wet J and quickness, but has added the size, athleticism and point-guard abilities to merit high-major coaches checking out his game.

Mychal Ammons, 6-4 wing, 2011: A precocious shooter from deep, the efficient Mississippi native has superb athleticism and already possesses a solid basketball IQ to go along with his picture-perfect stroke and overall smooth game.