Think Chicago basketball is all prep stars and the Bulls, with nothing in between? Time for a little College Hoops 101: The Windy City Edition. 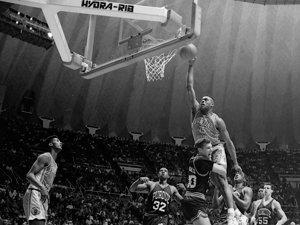 You might think the history of Chicago basketball begins with Michael Jordan and his Championship Bulls teams of the 1990s. Or, if you were born after the turn of the century, perhaps you don’t ponder history at all. Maybe you only study “Current Events” and locally grown stars like Derrick Rose, Jabari Parker, Evan Turner or Anthony Davis.

So pay attention. You need to know your history. First, let’s be clear about what this class is not about: Women’s Basketball in Chicago. That class is scheduled for pg. 50 of our CHI HOOPS issue and focused on Marshall High’s girl’s coach, the dignified Dorothy Gaters.

This class is not about the Harlem Globetrotters, either. “Of course not!” you say? Well, the Trotters weren’t founded in New York at all, but in Chicago in 1926 by an Eastern European immigrant, Abe Saperstein. In 1940, a decade before the birth of the NBA, his barnstorming all-black team won the Chicago Herald-American’s World Professional Basketball Tournament. The Chicago-based Globetrotters were the best team in the world for years, even during the NBA’s infancy, until, like baseball’s Negro Leagues, they were stripped of their power inadvertently by desegregation.

This class is primarily about college ball, which began receiving interest thanks to a big, bespectacled white guy named George Mikan. The 6-10 Mikan, who attended Quigley Preparatory Seminary, was clumsy, but big enough to pique the interest of the local Catholic college, DePaul, in the mid-1940s.

DePaul’s coach at that time—and for the next 40 years—was the likable Ray Meyer. Likable? Hell, he was lovable. And astute. And he had the patience of a priest. The coach invented the hook shot/coordination Mikan Drill that is still prescribed by coaches today, and soon college ball’s first dominant big man (averaging more than 23 points per game in his junior and senior seasons) was born. DePaul became a national power (more on the Blue Demons later) and Mikan would become one of the NBA’s first superstars, winning five Championships with the Minneapolis Lakers.

DePaul helped popularize hoops with local products like Howie Carl, and college doubleheaders became regular events at Chicago Stadium, years before the NBA’s Bulls would make the Stadium their home.

In Mikan’s wake came another big, burly white guy—Johnny “Red” Kerr, who grew eight inches before his senior year and carried Tilden Tech to the city title in 1950. Kerr led Illinois to the Final Four in 1952 and won an NBA Championship his rookie season. (Kerr became the first coach of the Bulls after his own playing career ended.)

The next important chapter in Chicago college hoops history took place in 1954, the same year the U.S. Supreme Court passed Brown v. Board of Education.

The city’s push to desegregate basketball came not with a championship—DuSable High School finished second in the Illinois state tournament. But DuSable was the first great all-black team and the first to make the state finals. Most experts concede that they were cheated in the championship and simply had too much, well, history to overcome.

Although martyred in 1954, DuSable paved the way for the great Marshall High teams of the late 1950s. The Marshall Commandos were entirely African-American, and they did what the Panthers could not—won state championships. George Wilson, who played at the University of Cincinnati after arguably the best Chicago Public School big man career ever, led Marshall.

Thirty blocks north of DePaul, Loyola University’s coach George Ireland was watching the local hoops scene and realized that he could win big with black city kids. The problem? The Ramblers played in a gym the size of this lecture hall, one that shook when the red line El train rambled by. Talented local players were unimpressed and signed up to play elsewhere. Besides, unlike DePaul’s Meyer, Coach Ireland had made enemies in town, so he recruited mostly New York and Nashville kids.

In 1963, Loyola (albeit with mostly out-of-town recruits) became the first and only college team in Chicago to win a DI national championship. Most notable, historically, was the racial make-up of Loyola’s starting lineup: four players were black.

Also in the early 1960s, on the far south side at Carver High School, 6-6 swingman Cazzie Russell was redefining what players his size could accomplish. Russell’s jump shot was arc-less but accurate and he became one of Chicago’s first nationally recognized stars.

After a great run in the ’60s, Loyola’s program dipped in the ’70s and has only been relevant nationally once since, when the ’84-85 team, which was led by All-American Alfredrick “The Great” Hughes, reached the NCAA Sweet 16.

Meanwhile, the DePaul Blue Demons, playing as an independent (not affiliated with any conference), were playing a national schedule and getting good local players, but weren’t a big draw in the early ’70s.

That chapter in Chicago basketball history is centered on the Bulls, but not the teams you’re thinking of. At that point, the Chi-based superstation, WGN, was televising every Bulls game, free (imagine!) to anyone with a television and antenna. The early-’70s Bulls were a stubborn and cohesive bunch that consistently won 50 games. Their coach was Dick Motta, a hardscrabble Mormon whose Bulls were disciplined and hyper-prepared. They never won an NBA Championship—never even got to the Finals—but their forwards, Bob Love and Chet Walker, and the combative backcourt of Jerry Sloan and Norm Van Lier, were beloved locally. Sloan and Van Lier in particular had a profound historical influence, as a generation of Windy City youngsters—most of them guards—grew up studying them.

This wave of new players would come to define the phrase “Chicago player.” The great Chicago guards who were raised watching WGN-televised Bulls games of the 1970s includes a stunning list of NCAA and NBA Champs, all-stars and assist leaders: Isiah Thomas, Kevin Porter, Maurice Cheeks, Darrell Walker, Craig Hodges, Ricky Green, Ronnie Lester (who might have been the best of all, had his career not been grounded by a knee injury), Quinn Buckner, Jim Les, Jeff Hornacek, Hersey Hawkins, Rickey Green, Sonny Parker and Glenn “Doc” Rivers. Whew.

By the late 1970s, Ray Meyer’s son and lead assistant, Joey, began to corral the best local players for his father, and DePaul enjoyed a glamorous national rebirth, courtesy, again, of WGN. Players like Terry Cummings and Mark Aguirre stayed home to play ball, and they took old man Meyer to the Final Four in ’79, in his fourth decade at the Lincoln Park school. Despite never getting further than that in the Tournament, the Blue Demons consistently achieved national acclaim in the regular season, as they posted 26-2, 27-2, 26-2 and 27-3 seasons between ’79-84. By that point, DePaul was even getting national recruits like Bronx-born PG “Hot” Rod Strickland, but Joey became the head coach and could never quite replicate what his Pops had done.

About two hours south of The Chi, the University of Illinois’ insightful and canny coach, Lou Henson, began to tap into the rich vein ofChicago talent, supplanting DePaul as the best college team in the state by signing players like Levi Cobb, Kenny Norman, Rob Judson, Eddie Johnson and Marcus Liberty.

Coach Henson’s 1989 “Flying Illini” (with no player taller than 6-7 and four Chicago-area starters, including Kendall Gill, Nick Anderson and Kenny Battle) made the Final Four—and was likely the best college team ever that was comprised of Chicagoland players. The Illini beat eventual National Champion Michigan twice in the regular season.

The city has also produced a roster full of legends whose best moments were not televised, but occurred in Chicago Park District summer leagues: Billy “The Kid” Harris, Art Hicks, Ben Wilson, Lamar “Money” Mundane, Frank Kaminsky Sr, Arthur Sibels, Brian Leach, Leartha Scott and Stevie King all might have made the League, but fate was not their friend.

Perhaps inspired by the Bulls like their forefathers decades before, the early-aughts brought some of this great local talent—including Head and Dee Brown, out of Proviso East—back to Illinois, where screechy voiced Bruce Weber led the Illini to the pinnacle of the sport, the National Championship Game. Those who were in St. Louis for the ’05 Final Four [*raises hand*.—Ed.] recall the Illini squad that lost a classic title game to North Carolina as a fun, gritty bunch who captured the imagination of fans in Chicago and across the country.

Illinois and DePaul have dipped again of late, but if history is any indication, these programs won’t be down for ever, especially if they can start keeping all the local talent closer to home.

Hope you enjoyed the lesson! See you next semester.

“Second City”? Not when it comes to hoops.
In Chicago—and everywhere else—the playground is no place for violence.
If you can make it on the streets of Chi-Town, you don’t need to make it anywhere.
Nike’s Chi-League is providing safe summer environments for Windy City youth.
The 50 greatest Chi-Town area basketball players of all-time.