Shareef O’Neal Looks To Start His Own Legacy

Son of Hall of Famer Shaquille O'Neal is ready to make his own mark. 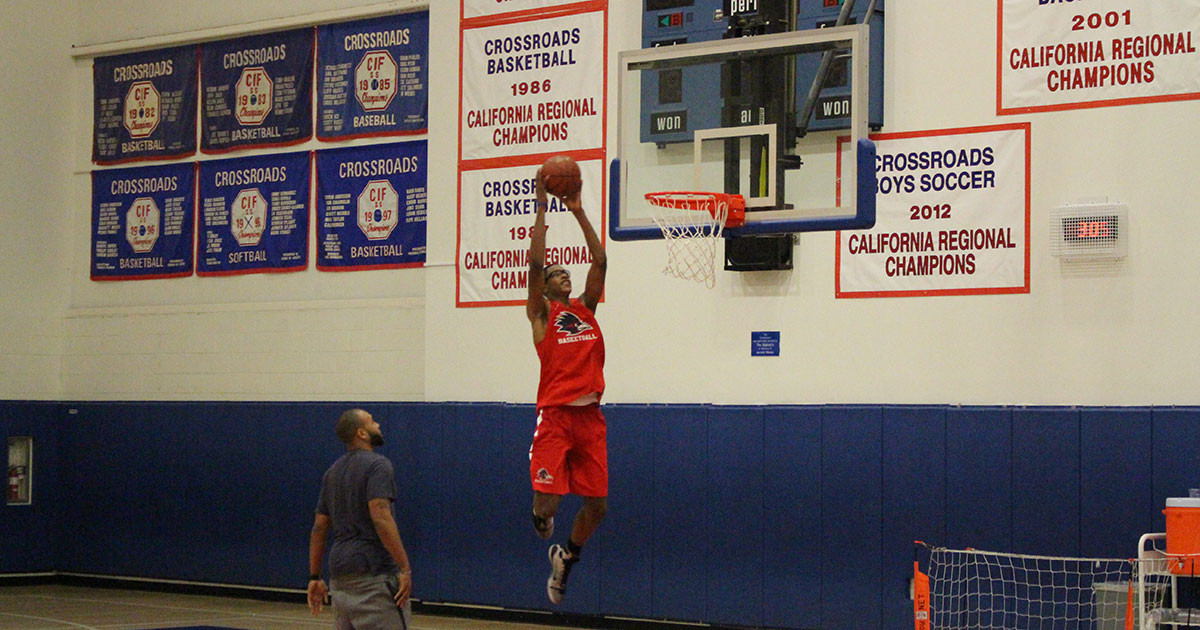 Practice has just ended at the Crossroads School in beachfront Santa Monica, CA. Yet, junior big Shareef O’Neal has opted to stick around afterward to get in some extra drills. First, he sprints to the corner touching the 3-point line before running back to the rim where assistant coach Anthony Davis repeatedly throws him lobs.

From a pure athletic standpoint, O’Neal has the potential to dominate, and his coaches say his work ethic and overall game are continuing to develop. With a strong showing on the AAU circuit last summer, he’s now recognized as a top-20 player in the Class of 2018.

The scary part is, though, he only started taking basketball seriously his freshman year. And now he wants more.

“People started telling me I was really good and could take this to the next level,” says O’Neal. “I never really thought about it, I just played [basketball] because it was always around. Once high school came I wanted to play JV because I didn’t think I was good enough to make varsity, but my coach forced me to play. After that I started getting serious because playing against the older guys was a whole different experience.”

He spent his freshman and sophomore seasons at the nearby Windward School in Mar Vista before deciding to transfer to Crossroads last summer. His family agreed they wanted a school with high academic standards and also a good basketball team.

However, Crossroads, once a proud program that won four section championships in six seasons (starting in ’96) and whose alumni list includes former NBAers Baron Davis and Austin Croshere, has currently found itself in rebuilding mode the last couple of years, finishing with a 12-17 record last season. Nonetheless, once the O’Neal family met with first-year head coach Chad Beeten they decided to be a part of the rebuilding process.

Shareef says he was specifically impressed by Beeten’s organization and attention to detail when the coach presented scouting reports on each team in their league.

Naturally, his last name draws expectations and comparisons. After all, he is the son of recent Hall of Fame inductee and Los Angeles Lakers great Shaquille O’Neal. His mother, Shaunie, says early on it was difficult hearing people tell her what Shareef needed to work on in order to be like his dad—or even what he should be eating.

Search online for images of when Shaq was in high school and you’ll see the younger O’Neal is headed in the same direction physically. And while the physical similarities may be there between the two, Shareef has more to his game at the tender age of 16.

“Sometimes Shaquille will say, ‘He’s way better than I was at that age, there’s no comparison to me and him when I was that age,” says Shaunie. “He’s just a different player than his dad. I think once people see him play they’re like ‘Oh okay, he doesn’t play like Shaquille at all.’”

At first, Shareef wasn’t sure how to deal with all the attention. He says his family has never put any pressure on him. It’s the people who would see his videos online and then show up at the gym to take pictures and expect him to do the same things his dad did. He realized the expectations and pressure came from everyone else, not his family. Over the last two years, though, he’s learned to adjust to the attention pretty well.

“My dad said, ‘When you see big crowds, or college [coaches] or scouts, just take that all in and show them what you can do,’” says Shareef.

He likes the way KD scores and also mentions James Harden’s footwork when asked who he models his game after. The 6-9—and still growing—junior has 3-point range, operates well in the high-post and can face the hoop where he consistently knocks down mid-range jumpers. The way he yanks the rim down after crushing a two-handed dunk is eerily similar to the logo made famous in the early ‘90s by Shaq’s Reebok sneakers.

He could get by with sheer athleticism defensively but knows he needs to get stronger to be more explosive. Offensively, he’s learning to adjust and knows developing his skills in the post, along with strengthening his perimeter game, will make him more of a threat against taller defenders.

“If I have the outside game I can put them on the island and isolate them, so I want to have both,” he says.

At Crossroads, he and recent University of Arizona signee Ira Lee will be the focal points of the offense. After having known each other for years, both transferred to the school last summer. Shareef says Lee has been pushing and motivating him because he wants him to continue getting better and sees his ability.

“He’s someone Reef can look up to,” says coach Beeten of Lee’s impact on O’Neal this season. “He has the national ranking and the clout, so to speak. He’s older, he’s bigger and he’s stronger. When they’re playing together, Ira’s mentality is kind of contagious, and he rubs off on Shareef.”

The idea of O’Neal joining Lee in Tucson has already been discussed. Wildcat fans shouldn’t get too far ahead of themselves though, since at this point it has all been just talk.

At the moment, Shareef says there’s no specific list of schools or favorites. He still has his junior season ahead, the summer circuit to follow, and then his senior year before having to make any official decision.

For now, the focus is on this season only, where Shareef hopes to make a run at a Gold Coast League title and state championship with the resurging Roadrunners.

There’s no secret how good fellow Gold Coast League member Sierra Canyon is. Led by the No. 1 ranked player in the Class of 2018 Marvin Bagley III, UCLA bound forward Cody Riley and Arizona State commit Remy Martin, they’re loaded with Division I prospects. Knowing this brings a smile to Shareef’s face when asked if he’s looking forward to their January contest. He says he and Bagley go way back to when both lived in Phoenix and played for the same club team.