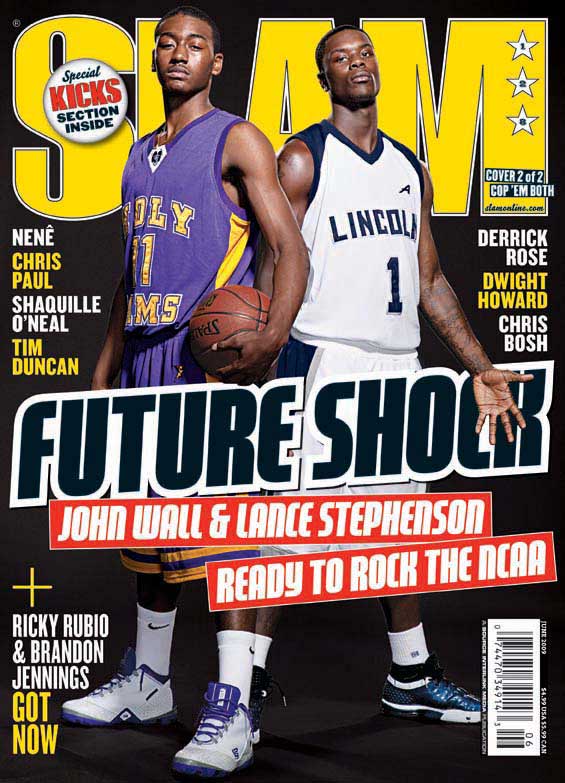 This issue has been teased in various places, on here an elsewhere, but today, finally, is the official unveiling. As always, I’m excited to share it with our readers, most of whom should be able to buy it this weekend in NYC and next week everywhere else.

As far as explaining why we did this dope, original split cover, I don’t think I could say it better than I did in my “6th Man” Editor’s Letter from the issue, so I’m going to reprint that below and then I’ll close with some of the details about availability.

Here’s my letter, word for word:

…Everyone interested in who their favorite sport’s future stars are, that is. As far as content in our magazine, there is no disputing that SLAM is always looking ahead. We featured Ricky Rubio when few people had ever even heard of him. We put the spotlight on Lance Stephenson before he’d finished his freshman year of high school, and our Punks section brings you the nation’s best prep players on a monthly basis (such as Brandon Jennings about one year ago). You get the point.

So what made us flip the usual script of putting future stars in the mag while the NBA’s top dogs grace the cover? A dash of daring combined with two unique opportunities and the understanding that Kobe Bryant, LeBron James and Dwyane Wade aren’t going anywhere. The daring comes from our willingness to try something different. Is it just stars who sell SLAM, or have we reached the point in this, our 15th year, where basketball-loving magazine buyers can trust that even if they don’t instantly realize the face(s) on our illustrious front page, the players must be dope because we say they are? The SLAM staff is obviously counting on the latter.

The opportunities came from two once-this-season meetings. The first, which jump-started the entire conversation regarding this cover, was knowing that Brandon’s Lottomattica Roma team was meeting Ricky’s DKV Joventut in Spain last December 11. Sure, we figured every hoop journalist worth their salt would be hounding these great prospects that week, but it couldn’t hurt to ask for some time, right? Well, either no one asked or these guys chose us, because they graciously gave us more than two hours of their time.

Once we had the big international cover locked up, we decided to cover our bases with a look at the two most compelling prep guards in America. Sure enough, just 10 days after Ricky and Brandon were in the same city at the same time, John Wall and Lance were in the same city at the same time. We reached out to those guys, dispatched Kelly Kline (see below) for her second big job in two weeks, and arguably the coolest split cover in SLAM history was born. We sat on them for a minute while Kobe and DWade did their thing, but with high school All-American games here and Draft buzz increasing, the time had come. The future is now.<<

Hopefully my letter answers the “why these guys?” or “why now?” questions people might have. Want more of that? Check out Ricky-Lang cover story writer Lang Whitaker’s extra video content here, and get John-Lance cover story writer Aggrey Sam’s take on his piece here.

Not that I expect too many questions after people have really looked at these covers…I’m expecting more of the “Damn, you guys are good”-type comments.

As for availability, all newsstands in the US will have both covers. That is still the biggest part of our business and we want you all to have a choice. Overseas outlets will most likely just have Ricky-Brandon (for obvious reasons), and subscribers will get Ricky-Brandon as there wasn’t a regional split that made sense. The best solution for people who want both covers? Go to simbackissues.com, click on SLAM and buy ’em both.