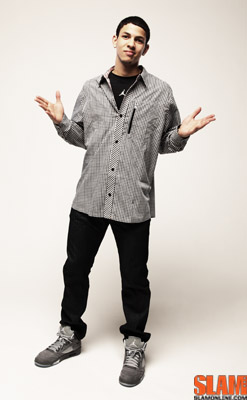 In just one second, that’s how many shots the photographer’s camera can get of Austin Rivers, Anthony Davis and Michael Gilchrist as they pose together on the Thursday before the Jordan Brand Classic, the last of the national high school all-star games. It’s a necessary speed considering the subjects: the top three high school basketball players in the country, all on the fast track to the NBA.

Jump ahead to the end of their rookie season, and these photos will serve as evidence that these three players really were just high schoolers two years prior. If they follow the script of their predecessors, all three players will, in the next two years, have likely finished one year of college, been selected in the NBA Draft Lottery and just completed their first NBA season.

Back to this early April Thursday, as their childhood ticks away, the boys decide to get a jumpstart on adulthood, donning serious expressions as the photographer snaps away. It doesn’t take long, though, for Gilchrist, the youngest of the group, to remind everyone to enjoy the moment, as he jumps up and down ecstatically while acknowledging how cool the whole cover shoot experience is. Feeding off his energy, the other two loosen up and crack smiles. The photographer smiles too. He’s got his shot.

The photographer gestures to the Duke-bound Rivers to move his hands down for the picture, and the 6-4 guard does so to perfection. As the son of ex-NBA player and current head coach Doc Rivers, photo shoots are nothing new to him. While the other players were getting changed earlier, he wisely made sure his clothes were steamed and pressed.

Looking good for the camera is a trait you’d expect to come from his father’s teachings, but could easily have come from his mother—just like his basketball skills. It was his mother, Kris, and not Doc, who coached Austin in the YMCA league when the family lived in San Antonio. “She’s the reason I’m here, to tell you the truth,” says Austin. “She gets the least credit but deserves the most.”

Aside from coaching and taking care of him at home, Austin’s mom impacted her son’s mindset, as well. A swimmer and runner at Wisconsin before meeting Doc and transferring to Marquette, Kris is perhaps the most competitive one in the family.

“When we play cards and she loses, she doesn’t talk to you for, like, two days,” Austin says. “She doesn’t like losing anything.”

That inherited trait was on full display in Austin after his team lost the McDonald’s All-American Game, and the usually media-friendly Rivers was quiet and visibly annoyed in the post-game press conference. But such instances—losing instances—were rare for him at Winter Park (FL) High. A two-time state champion with a handful of different Player of the Year awards to his credit, Rivers averaged 28.8 ppg, 6.1 rpg, 2.2 apg and 2.0 spg during his senior season.

Winning or losing, on or off the court, Rivers carries himself in a way that can only be learned by tagging along with your father and meeting the likes of Michael Jordan, Larry Bird and LeBron James. The shooting guard even went as far as to say in a March interview with The Sporting News that he wanted to “destroy” James when he reached the NBA. Call it competitiveness, cockiness, whatever. Just know Rivers has high expectations for himself at Duke in the fall. “I plan on being the biggest impact in college basketball next year,” he says.

If Rivers wasn’t born with a target on his back already, statements like that one and going to Duke, a place he calls “the most hated school in basketball,” ensure there will be one waiting for him in Durham.

He doesn’t think of it as pressure, but instead as a chance to make his own name, separate from his father’s.

As he poses every which way for the photographer, it is clear that he is comfortable in the spotlight and embraces it. The camera clicks over and over and can only conjure images of a Hollywood red carpet—
another place Rivers seems anxious to one day be.

In every sense, Rivers is grooming himself to be a professional. While it’s hard to find any other senior with his skill set, it might be harder to find one with his swagger, maturity and experience.

Rivers sneaks a peek into the photographer’s eyes like he might to his head coach while playing defense. The photographer gestures for Doc’s son to change the way he’s standing, but of course, he already knows where to be. This is all practice for the next level.

To Rivers’ right is Davis, a player nobody wanted to take a pic of just two years ago. At that time, Davis was just a 6-2 guard with goofy-looking goggles who wasn’t even sure if he was going to be able to play at any level other than high school.

“I always thought that the NBA had no chance,” Davis says. “And Division I? That wasn’t me.”

But in what seemed as quick as the flash of the photog’s camera, Davis shot to the top of prospect lists. ESPNU ranked him its No. 1 high school senior in April.

While the Kentucky-bound Davis’ journey won’t end with this cover shoot, it did begin with a picture. When he was 3 years old, Davis, a Chicago-native, held a Michael Jordan basketball and posed for the camera.

“That was the first time I picked up a basketball, and I just stayed with it,” Davis says.

While the rest of Davis’ story is something off the silver screen, his basketball career between the day he took that picture and his junior year of high school is straight to DVD.

Growing was one thing—Davis still had to show he could play. And at Perspectives Charter, a small school that rarely faced any of the top talent in Chicago, he would have to put up monster numbers to get noticed.

Using the guard skills he grew up learning and his newly found height and post moves, Davis averaged a double-double and blocked a ton of shots during his junior season. That will get you noticed. Soon Davis Sr. was getting 20-25 calls a day and a mailbox full of letters from schools that wanted his son. After all the craziness, Davis settled on Kentucky. Just a few months earlier, he thought the best he could do was Cleveland State.

LeBron James: Anthony Davis ‘Everything I Expected And More’