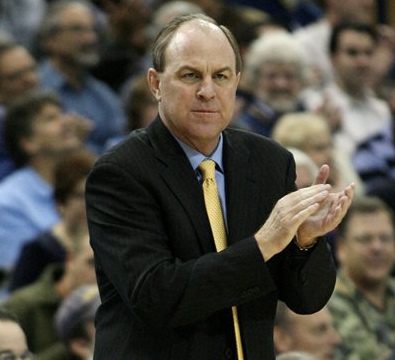 by Ben Collins
The year of the Early Upset shook up the polls so much that SLAM’s inaugural nationwide Top 10 was up in the air. So we needed to go to the emails from the very beginning to decide this thing and it became pretty clear. A full team of beasts beat out the most dominating freshman in, uh, forever. At least this week.

1) UCLA (4-0) – I was fawning over these kids all week last week and so were a couple of BabyLinkers.

“Everyone seems to forget that they were a Final Four team last March. And with Aaron Affalo passing on the Draft to return to LA, he’s going to form one of the best 1-2 punches on the West Coast with Luc Richard Mbah a Moute(had to look that one up),” said Drew Shaner, who had them ranked at number five (in fairness, behind Ohio State, even) before the top four decided to fold on themselves. “UCLA will ride these two as far as they can take them.”

They really didn’t falter all week and they had better competition than both Florida and UNC. They toughed out a streaking Georgia Tech team because both of their wings (Shipp and Afflalo) are shooting almost 47% from the floor. When Mbah a Moute decides it’s his game to take over, too, he’s off-the-charts in terms of percentages (13.6 and 8.2 on 66% shooting five games into the year.) And they take care of business against teams they’re really supposed to beat.

We’re looking at you, Wisconsin.

2) Ohio State (6-0) – We really respect you coaches. We really do. You’re smart. And you have those chalk boards, and, frankly, I want one. Those are pretty cool. And those button-down shirts? Lookin’ snazzy.

But, in fairness, you kinda blew this one. We think Greg Oden is going to be better than everybody but LeBron in a couple of years, too, and until then, he’s going to completely destroy low-NCAA teams with no one over 6’8″. As BETCATS said even before the Top 5 collapses, Ohio State is number three in the country behind Florida and UNC “when Greg Oden is healthy.” And we completely agree that we think this team is that good.

But do we know that for a fact?

But on a week when UCLA had some hard-fought wins against some legitimate contenders and Marquette took out Duke, Ohio State, by no fault of their own, has done nothing to show that they should be the number one team in the country.

The Buckeyes have their first test against UNC tonight. Loosen up your ties, coaches. You’ll get ’em next week.

3) Florida (6-1) – With how talented this team is, it’s exceedingly harder to drop them out of the Top 3. Even with the loss to Kansas. Even with how flustered Noah looked at the end of that game.

They’re still the defending National Champions. They’re still pretty much the exact same team. They still have the best frontcourt in the country. They’re everyone in the Comments Section’s pick for pre-season number one.

I know there’s some inconsistency here by having OSU at 2 and Florida. I’m not sure I care.

4) Kansas (5-1) – That said, I’m not going to knock Kansas for beating what was easily the best team in the nation. Everyone (Andy Katz, especially) is flipping out and saying this is all Bill Self’s doing. But look down their roster.

This team has talent. Why are they flying so far under the radar? The Big 12 is tough at the top this year. They just beat the defending National Champs.

Am I missing something?

5) Pittsburgh (6-0) – This team looked pretty unconvincing for a long time. Aaron Gray, who Greg Oden will have for breakfast in the NCAA tournament if that ever takes place, seemed to be their entire team.

Then there was that Florida State game. The one where Al Thornton outplayed Aaron Gray offensively and the Panthers won by, oh, 22.

6) Marquette (6-0) – This team is ranked too low everywhere and blame it on the lack of an upperclassman with name recognition. But Dominic James is getting there.

The best Golden Eagle since D-Wade was briefly my favorite player in college basketball when he helped take out Duke last Tuesday. What was the last young Big East team to look this good this early? The 2002-2003 Carmelo-headed Syracuse Orange. I hope you remember how that ended up.

7) UNC (4-1) – This is really just a talent pick and we’ll see how good they’re actually going to be this week against Ohio State (tonight) and Kentucky (Saturday). But, man, they didn’t look that young against #21 Tennessee (even if they are a little overrated to begin with). Hansborough put up numbers as high as his draft stock (27, nine and four) and Branden Wright and Reyshawn Terry were a combined 12-of-15 from the field.

As BabyLinkstigator H to the Izzo said, “Best freshman class with Lawson, Wright and company. Solid inside presence with Hansborough and the best disributor in the ACC in Frasor.”

He then went on a rant about cloning Dikembe Mutombo, but, uh, he has a point about the youngens.

8) Alabama (5-0) – Outside of that nice win against Xavier and knowing how good Jamareo Davidson can be this year, there’s not much to say about these guys that Matthew can’t.

9) Texas A&M (6-0) – This is another one of those undefeated teams that you’re afraid to place higher than Butler. You know they’re more talented. You know that, in the long run, you’ll look considerably smarter (see: the primary reason). But even though they have Acie Law and he looks like one of the best guards in the country right now, you’re thinking to yourself, could this team beat two ranked teams in three days?

And you really have to think about it, don’t you?

10) Butler (7-0) – Why no lovin’ for the early morning Cinderella in the polls? They beat a Gonzaga team that handedly beat a UNC two days before. If I used the transitive property, this a top 10 team everywhere. They used (previously mentioned as overrated, but, again, regardless) #21 Tennesee as a footstool.

I know AJ Graves isn’t a household name, but this team is fourth in the RPI. And, since they have no real competition until March, Butler is in the SLAM Top 10 for the first and maybe only time all year.

Feel free to start posting for next week’s Top 10 in the Comments Section. As always, best ones make it in.