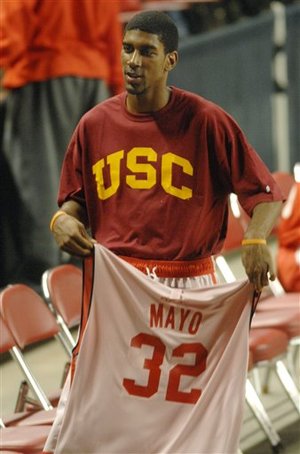 OJ Mayo is good at basketball. We know this.

We’ve seen the high school all-star games. We’ve seen the Youtube videos, and not just the ones of him “bumping” a referee that we’re now certain is related to Tim Donaghy. He’s 6’4” — maybe 6’5” — has a jumpshot and has some of the best point guard skills we’ve seen in a big guard since Gilbert Arenas.

We’ve heard the hype. The buzz could knock out all of the power in Los Angeles. (This may or may not be a bad thing.)

So we implore you to go ahead and do what’s natural: flip out! Everybody! Come on! Make a life-sized OJ Mayo cut-out, dress it up all pretty-like and tango with it on your front lawn. Drape a USC flag around your shoulders like a shawl and wear only that to work every day. Slather yourself in red and yellow facepaint. When you feel the facepaint isn’t expressive enough, set yourself on fire.

For the sake of hype, we should be doing these things, too. We should make OJ Mayo the next LeBron James or the next Sebastian Telfair and immediately throw him and the USC Trojans at the top of everything.

If he swims, we were right, and we knew it all along. All those hours being ridiculed for the facepaint and the flag-wearing and the six days in intensive care were worth it. Now we get a book deal! I’m pretty sure this is how Charlie Rosen did it.

If he sinks, we blame it on character issues. “All the talent in the world,” we’ll say, “he just couldn’t go to class/share with his teammates/get past himself/lay off the (fill in hampering applicable illegal or inappropriate activity or substance here).” And we’ll be fine because we never could’ve predicted all of these readily predictable character flaws of those put on a too-tall pedestal. No, never.

You can say this: USC is the preeminent team in the Pac-10 because OJ Mayo is on USC.

But you must also say this: OJ Mayo is on USC because USC was not the preeminent team in the Pac-10.

You’ve heard this story already: OJ Mayo walks into Tim Floyd’s office and tells him that he wants to create the USC basketball legacy on his own terms. Or maybe he came down through the chimney. I don’t know, something like that. The story is one year old and it has already been destroyed by the telephone game.

Regardless, OJ Mayo walked into a situation where he knew that a collected assortment of talent, like UCLA, UNC, Memphis or even Arizona, wouldn’t hamper the minutes he needs to survive as the best player in his class. Thus it would be completely illogical to put them atop the top 25, even though Tim Floyd was still able to squeeze a Sweet 16 appearance out of last year’s team.

So we’ve leveled off Mayo and the Trojans at number seven in our Preseason Top 25. This, too, may even be a little high. Because this team is very combustible. And we’ve already been burnt too many times before.