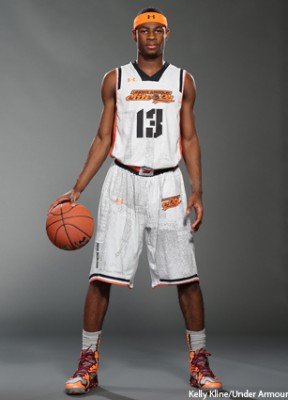 During last year’s 5A state championship game, a bench-clearing fight led to Mississippi’s Callaway HS being placed on probation throughout the ’13-’14 regular season. Essentially, the Chargers wouldn’t be allowed to host tournaments, travel to tourneys  or even host out of state teams. Considering that Callaway features the top-ranked junior in the country, Malik Newman, many pondered what that would mean for the program and the prospect himself. Would he transfer? Would his ranking suffer as a result of him not playing in the nation’s top tourneys against the nation’s top teams? Needless to say, not a single thing has changed.

Callaway’s nucleus returned and is perfectly on track to capture its third consecutive 5A state title. Newman’s on-court performance has been just as good as it ever has. Currently averaging 30.2 points, the 6-3 combo guard has led his team to the No. 22 spot in the most recent USA Today Super 25 national rankings with a 21-1 record.

According to MaxPreps, through his first 22 games of the season, Newman has scored 30 or more points twelve times, while reaching 35+ points on eight different occasions — including a 42-point outburst. In fact, the lowest scoring performance he’s had thus far has been 19 points. In addition, he’s also averaging over six rebounds, three assists and two steals per game.

Since his performance has remained the same, so has his spot at the top of the class.